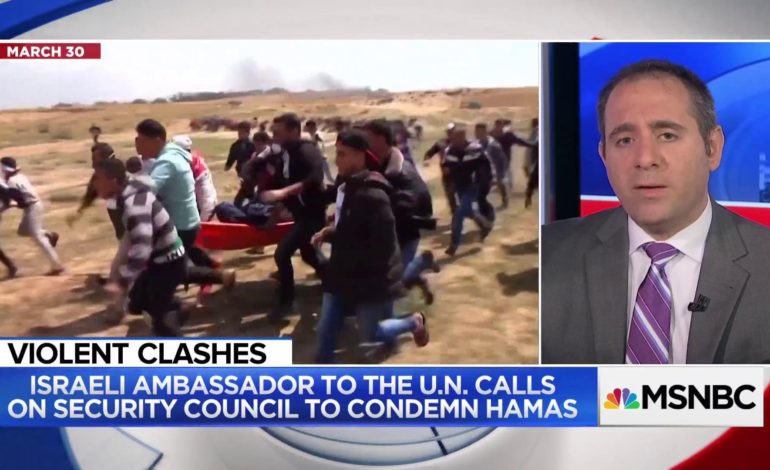 While the U.S. media is focused on the coverage of President Trump’s “blurry” tweets bashing Syria and other fellow politicians along with the news about Khloe Kardashian’s cheating boyfriend, major events in Gaza, Yemen, Syria and Lebanon have gone almost unnoticed.

“Almost” because MSNBC was the only major broadcast network that actually addressed the atrocities going on in Gaza using fair numbers.

The U.S. government not only ignored the events in Gaza, it also blocked a draft statement in the U.N. Security Council on Saturday that had been suggested by Kuwait — the representative of Arab countries on the council — to investigate the clashes on the Gaza-Israel border that left a “number” of Palestinians dead, in violation of international law. This news was reported by a few outlets, including the Israeli newspaper, “Haaretz.”

The New York Times reported 15 Palestinians dead in the first clash on the Gaza border on Friday, March 30, then reported the killing of nine Palestinians the following Friday when the second deadly confrontation took place.

Meanwhile, MSNBC anchor Chris Hayes gave a report on Wednesday, April 4 calling out the U.S. government for not addressing the Gaza massacre and stating that 750 Palestinians were shot, leaving at least 15 dead in what he called “the correct number.”

In his report, Hayes stated that “It [Israel] will also note that at this particular protest there were some protesters who threw rocks and threw burning tires at the border fence, all of which is true, but in no way justifies what Israeli soldiers appear to have done — which is perch on a hill and pick off protesters with sniper fire.”

Hayes added in his report, “Not only did the president of the United States say nothing, not only have the vast majority of the members of congress — Democratic and Republican — been entirely silent about this frankly unconscionable use of force, the U.S. blocked a U.N. security statement calling for an investigation of what happened.”

Hayes was later applauded in a report by Common Dreams, which stated that human rights defenders and “other progressive journalists” are applauding him for a rare critical coverage of Israeli crimes by a major U.S. cable news outlet.

Those killed in the April 6 protests included Yaser Murtaja, 30, a Palestinian journalist and a cameraman for Palestinian Ain Media, a production company he co-founded. Various news outlets reported Murtaja’s death, but the Washington Post, along with Israeli news outlets like the Jerusalem Post and the Times of Israel, rushed to report Israel’s statement stating that he was an activist for Hamas — once again demonizing the Palestinian side and portraying Israel as the helpless state that was simply doing its duty in defending its illegal settlement by using snipers on unarmed Palestinians.

In response, CNN published Israel’s statement saying, “The Israel Defense Forces told CNN: ‘The IDF does not intentionally target journalists. The circumstances in which journalists were allegedly hit by IDF fire are not familiar to the IDF, and are being looked into.’”

For the first time in the history of major American news networks, however, Israel’s defense strategies seem to be under fire, because this time videos of an Israeli sniper who killed an unarmed man and rejoiced went viral on the Internet.

“Wow, what a video! Yay!” claimed the rejoicing Israeli soldier in the video that recorded the shooting of a motionless Palestinian man who seemed to pose no threat to either the snipers or the IDF.

Needless to say, FOX News’ coverage of any event has always been tainted with its political, right wing evangelist views that support Israel. In its report about the Gaza protests, it framed the protesting Palestinians as the “instigators” of the clashes.

The report states, “Witnesses said hundreds of Palestinians participated in the clashes and the Israeli military said some of those protesters rolled burning tires and threw stones at forces stationed at the border. It said troops opened fire at the ‘main instigators.’”

The Fox News report discussed the Palestinian protesters, claiming that “thousands of Gaza residents streamed to five tent encampments” and ignored the atrocities committed by the Israeli Defense Forces against the unarmed protesters.

Some reports by respected news outlets such as the New York Times seem less biased in their coverage of the events; however, there is still a lack of coverage concerning major international events — especially those that take place in the Middle East.

It is no secret that U.S. foreign policy is pro-Israel, but as journalists and media practitioners, the U.S. mainstream media has been doing a poor job in giving weight to important news events and has proven biased in its reporting of events that do not support the United States’ foreign policy.

Such is the case recently in Gaza, where a number of international laws were violated and where the mainstream media almost ignored the efforts of the U.S. in blocking the U.N.’s initiative to investigate the violations.

This is why Hayes’ report received applause when it came out. You almost never see a major U.S. news outlet report with little to no puffery on the Palestinian side of the issue; the U.S. media almost always reports in favor of the Israeli side.

Because fair and unbiased journalism is a reflection of a healthy, democratic society, this issue of the lack of coverage of important events or the unfairness in coverage becomes a real concern to our democratic values in American society.