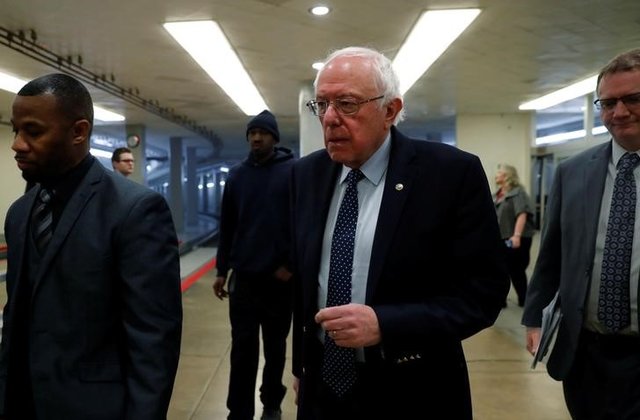 WASHINGTON,D.C. — Senator Bernie Sanders will introduce a bill on Tuesday that would fine opioid drug manufacturers for deceptive marketing and implement the harshest penalties yet on drugmakers found responsible for contributing to the drug epidemic.

Sanders, an independent who ran for the Democratic presidential nomination in 2016, said the bill aimed to hold opioid manufacturers accountable for their role in the epidemic and force them to help pay for the crisis, which the White House Council of Economic Advisers has estimated cost more than $500 billion in 2015.

The legislation, called the Opioid Crisis Accountability Act of 2018, would ban marketing that falsely suggests an opioid does not have addictive qualities or risks and would fine companies that are found liable for contributing to the epidemic $7.8 billion.

Companies that violate the marketing provision would be fined 25 percent of the profits from their opioid products.

The legislation would also create criminal liability for top executives of pharmaceutical companies that are found to have contributed to the epidemic.

“At a time when local, state and federal government are spending many billions of dollars a year, those people will be held accountable and asked to contribute to help us address the crisis,” Sanders said in an interview. “It shouldn’t just be the taxpayer that has to pay for the damage that they did.”

The bill does not yet have any co-sponsors, and with Republicans in control of both chambers of Congress and the White House, it is unlikely to move forward anytime soon.

More than 63,600 people died because of drug overdoses in 2016, according to the U.S. Centers for Disease Control and Prevention.

Congress has held several hearings on the opioid crisis in recent months and recently appropriated billions of dollars to address the epidemic. It is considering dozens of bills to address the crisis, but the legislation so far has been fairly limited in scope, including bills that address government policies and authorize the creation of grant programs.

Several states, including Ohio and Kentucky – among the hardest hit by drug addiction – have filed lawsuits against opioid manufacturers for fueling the epidemic.

“The real legal struggles have taken place at the state level,” Sanders said. “It seems to me that it’s appropriate to take that fight … here to the federal government.”