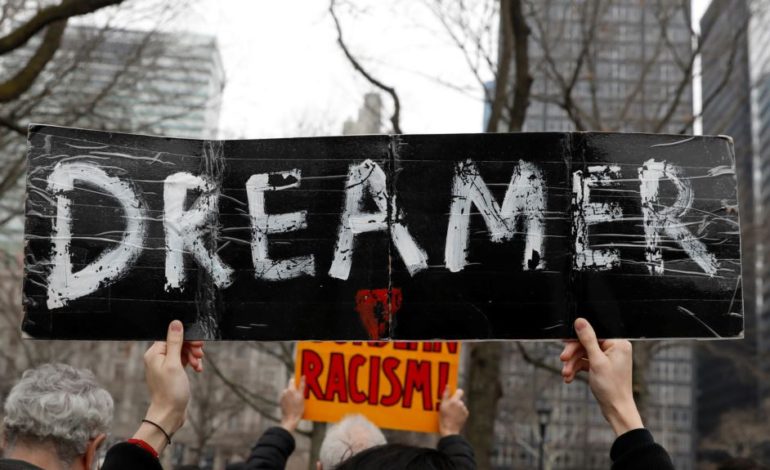 Activists and DACA recipients march up Broadway during the start of their 'Walk to Stay Home,' a five-day 250-mile walk from New York to Washington D.C., to demand that Congress pass a Clean Dream Act, in Manhattan, New York, February 15 - Reuters

WASHINGTON, D.C. — A bipartisan majority of the House of Representatives on Wednesday urged Speaker Paul Ryan to schedule debate on bills to protect young undocumented immigrants from deportation, in a move aimed at reviving a push that sputtered in the Senate in February.

Backers said they had 240 House members on board so far pushing for debate of four different bills to replace the Deferred Action for Childhood Arrivals (DACA) program, which President Trump ended on March 5.

Under the House members’ plan, the measure with the most votes would win and be sent to the Senate. November’s congressional elections could contribute to an already difficult path, however.

The bill many lawmakers think is most popular was written by Republican Will Hurd and Democrat Peter Aguilar. It would protect “Dreamer” immigrants from deportation and strengthen border security, although not with a Southwest border wall Trump wants.

DACA, established in 2012 by then-President Barack Obama, protected illegal immigrants brought into the United States by their parents when they were children. Around 800,000 “Dreamers” have participated.

With Trump’s action, their legal status is in limbo pending the outcome of court battles.

Trump has urged Congress to write legislation giving these immigrants permanent protections, but he has failed to reach a compromise with Congress.

“It is time to have a full debate for the American public and have the entire country decide what border security should look like, what a permanent fix for Dreamers should look like,” said Republican Representative Jeff Denham, who represents a central California district with a large Hispanic population.

In 2016, Democratic presidential candidate Hillary Clinton beat Trump in his district, leading to speculation that Denham, like Republicans in similar areas, could face a tough re-election.

At least 218 votes are needed in the 435-member House to pass legislation. With five vacancies, slightly fewer are necessary.

But there are difficulties, even with the 240 votes supporting this latest immigration push.

Only 50 of the House’s 237 Republicans are behind the effort so far, with nearly all 190 Democrats on board.

That presents political problems for Ryan and his leadership team, which bridles at passing legislation not backed by a majority of fellow Republicans.

Representative Linda Sanchez, a member of House Democratic leadership, told reporters that a bill to take care of Dreamers could pass the House if Ryan allowed it, but that opponents were blocking a debate.

“One hundred of the most conservative members in that (Republican) caucus are making policy for the rest of the United States,” Sanchez said.