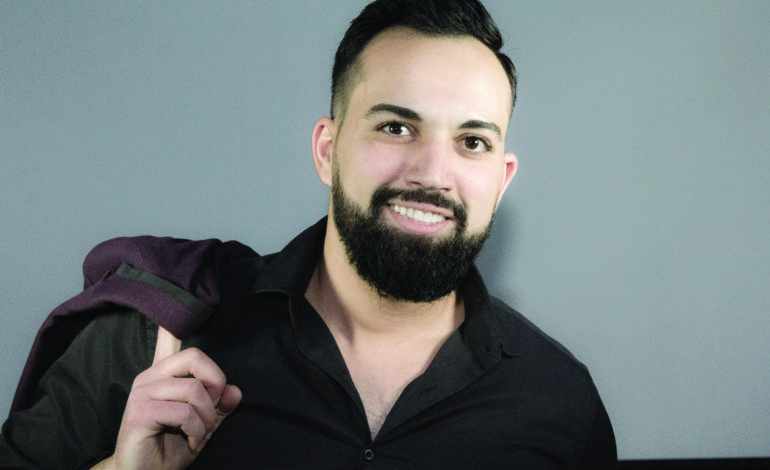 LOS ANGELES — Boualem Hassaine has always loved acting. He would stand in front of the mirror and practice as a child for hours. All that practice has led to roles in “American Sniper”, “The Accountant” and most recently, HBO’s “Westworld.”

Hassaine, who primarily grew up in Algeria, now lives in Litchfield Park, Arizona, a suburb of Phoenix, and Orange County, California. He routinely commutes between the two communities for work. He does mostly production work in Phoenix and drives back to L.A. primarily for acting jobs.

“I got so used to it,” Hassaine told The AANews. “I pretty much know the whole way like the back of my hand.”

Hassaine and his family moved to Litchfield Park his freshman year of high school. Prior to that, they’d traveled extensively and he learned several languages along the way. Growing up in Algeria, he learned Algerian, French and Algerian Arabic.

When he was growing up, his family moved to Syria for three years. While there, he became fluent in Arabic. While traveling to Italy throughout the years, he learned Italian. Hassaine said that growing up traveling and experiencing other cultures around the world helped him realize that humans are all very similar.

When Hassaine and his family moved to the United States his freshman year of high school he quickly understood he needed to learn another language.

“It was tough, honestly,” he told The AANews. “I did not speak any English at all when I moved out here. All I knew how to say was, ‘Hi, how are you?’ That was pretty much it. Nothing at all.”

Hassaine said it was really hard having to learn the language, the culture and get to know everybody in the community. He said signing up for theater classes helped him learn.

After graduating in 2004, he attended Western International University for three years before an insurance business he had opened became too successful to ignore and he left school.

Hassaine’s first major role came in 2007 with a role in Peter Berg’s “The Kingdom”, starring Jamie Foxx and Jennifer Garner.

Boualem Hassaine on the set of USA television show “Shooter”

His acting career then had a seven year hiatus until 2014. He decided it was important to focus on his insurance business and have a backup plan, rather than give his entire life to acting; a decision he said he still regrets to this day.

A chance conversation with a friend of a friend on Thanksgiving of 2013 changed all of that. While visiting Disneyland, Hassaine ran into Garner. At the time, she was still married to actor Ben Affleck, who gave him some career advice.

He said Affleck told him that he didn’t know anyone in the business who had a backup plan and that if he actually wanted to be an actor, he had to put all of his efforts into it.

Hassaine heeded that advice. Five months later, he sold his successful insurance business, set aside eight months of financials and began to call everyone he knew in the film industry.

Eleven months after that conversation Hassaine got a role in “The Accountant”, which starred Affleck.

In 2014, Hassaine appeared as an insurgent in “American Sniper” and a Marine in an episode of the FX series “The Bridge.” He also produced the short film “True Love.”

The film has won 22 awards to date, including Best Short Film and People’s Choice Award at the 2015 Global Independent Film Awards. Hassaine also received an Independent Global Humanitarian Award from the festival for his work on the film.

In 2015 Hassaine got a role on the award-winning CBS drama, “NCIS.”

In 2016, he appeared in “Ride Along 2”, starring Ice Cube and Kevin Hart. That same year, “The Accountant” was released.

His most recent work is on CBS’s new television series, “SEAL Team” and HBO’s “Westworld.”

Hassaine’s work goes beyond film, however. He also owns a business called The Final Gift. The company records stories from people to share with future descendants or other family members who may have missed the opportunity to hear them.

“It’s for people to leave their legacies for future generations,” he said. “We provide video service for people to tell their stories.”

The idea came from his love for his grandmother.

When Hassaine and his family left Algeria when he was 10, they were forced to leave his grandmother, who’d primarily raised him and his siblings.

“After we left Algiers I stayed in contact with her, but I never actually went back to visit Algeria,” he said. “It wasn’t until 2012 when I was planning a trip to go back and see her. My trip was scheduled for May and in late March I got a call at 2:30 a.m. that she had passed away.”

Hassaine said that was a difficult time for him and that some of his childhood memories of her had evaded his recollection.

In 2008, Hassaine wrote a screenplay for a feature film that featured an Arab Muslim hero as the protagonist. He was told in meetings with production companies that mainstream audiences were not ready for something like that.

He said that with films like “Black Panther” setting records in theaters around the world there is no longer an excuse to not make a film with an Arab Muslim protagonist and he’s still working to get it made.

Hassaine said one of his career goals is to bring the value of Arab filmmaking to mainstream audiences around the world.

Growing up in Algeria, he saw the most beautiful beaches, the largest desert in the world and mountains as beautiful as the ones in New Zealand. He said bringing these landscapes to Hollywood’s attention and the world in general are among his career goals.

He is currently working on a short film he produced and is starring in called “Enlisted.”

“A war hero who is struggling with PTSD encounters a young Muslim from one of his past tours who is now trying to join the Marines,” the film’s logline reads. “This young Muslim can be the help he needs to recover from PTSD or the one to push him to the edge to take his own life.”

Hassaine plans to continue to write, act and produce while commuting between Arizona and California.

The first episode of “Westworld” that Hassaine appears in premieres April 22.