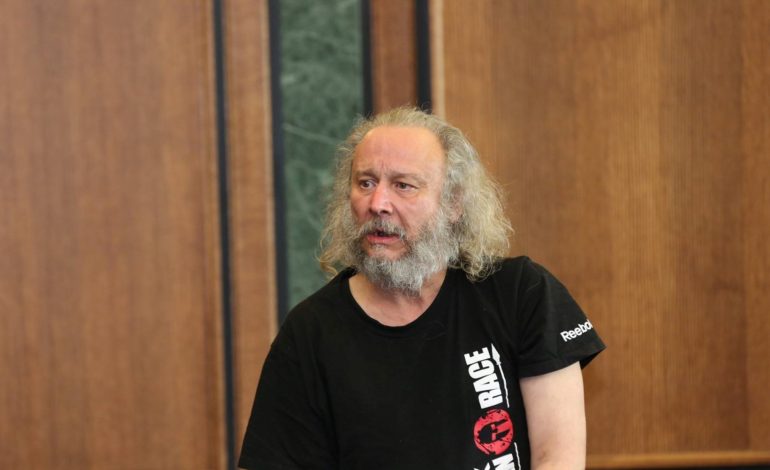 DEARBORN – When John Salvatore Deliz, 57, did not show up in 19th District Court on April 24 for assaulting an Arab American woman in an emergency room on Feb. 10, Judge Mark Somers issued a bench warrant for failing to appear.

Police found Deliz the next day and he appeared before Judge Somers. According to Somers, Deliz hadn’t charged his GPS tether. That’s when he went off the map.

Deliz was charged with a misdemeanor in the Feb. 10 attack in which surveillance video shows a 19-year-old college student speaking to a receptionist and beginning to fill out paperwork in the emergency waiting room of Beaumont Hospital when a disheveled man briskly walked behind her and knocked her to the ground. The video also shows a startled receptionist, a paramedic and a security guard springing into action and stopping Deliz from punching the young woman in the face.

He was ordered to wear the GPS tether when he was released on April 21, after a competency hearing found him able to stand trail.

However, as soon as Deliz entered the courtroom on April 25, he began speaking incoherently to the judge, attempting to explain to him why he hit the woman.

Deliz was speaking over the judge and his attorney during the entire duration of the hearing and had to be escorted out of the courtroom once.

The disgruntled man could be heard saying, “I’m a good Christian” and “I’m done having fun, I wanna go back home.” According to a police report, Deliz had been wandering the hospital’s hallways and lingered in the waiting room and asked people for cigarettes while he waited for a friend to pick him up. He had attempted to seek mental health care, but was not admitted by the hospital.

The report also stated the security officer said he could stay, only if he’d “sit down and leave the other patients alone.”

The woman was dropped off by her mother at around 3:30 a.m. on Feb. 10 to receive treatment for a possible broken jaw after she slipped and fell on the ice.

A few seconds later, she suffered three blows to the face.

In a lawsuit, Majed Moughni, the woman’s attorney, said Deliz had escaped from a group home showing signs of schizophrenia and bipolar disorder and was admitted into the hospital for not taking his medication. It’s unclear who admitted him.

Deliz was deemed to be capable of standing trial at his competency hearing, but at the April 25 hearing Somers said he had to be “re-referred for appropriate action” and that he appeared not to be taking his medication.

Deliz faces a second competency hearing on May 14.

He added that Deliz will have exceeded the 93 days the court is allowed to keep him in jail on that day, since he was charged with a misdemeanor. Somers also said Deliz could be referred for treatment.

Moughni told The AANews that the Dearborn police “failed” the victim for not elevating the charge to a felony, adding that she could have hit her head on the receptionist’s counter and suffered much graver injuries.

“It’s a slap in the face to the victim and our community if this person is left to roam the streets,” Moughni said. “If he has mental issues, he needs to be placed in a mental institution.”