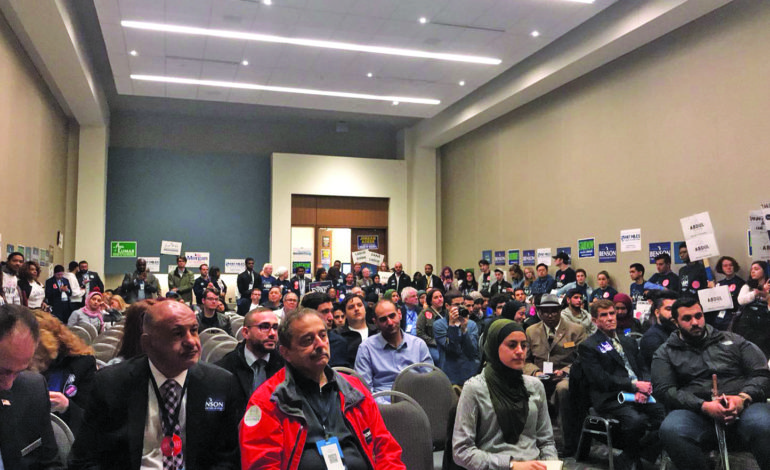 DETROIT – It’s no secret that the 2016 presidential election cultivated an electrified wave of progressive activism and swaths of candidates from minority communities running for office.

In Michigan, where President Trump was victorious, increasingly polarized Democrats and Republicans are gearing up for contentious races to replace its governor, attorney general and secretary of state. In addition state supreme court justices and state and U.S. representatives and senators, as well as a plethora of local candidates, are seeking re-election in November.

But what wasn’t expected were the number of attendees and intense energy behind deeply progressive values during the day-long Michigan Democratic Party endorsement convention at Cobo Hall on April 15.

This progressive shift within the state’s Democratic Party paved the way for its nomination of Plymouth attorney Dana Nessel— who has gained support from LGBT and marijuana advocates— for attorney general.

About 6,700 of the party’s members who packed the hall gave Nessel the nomination over Pat Miles, former U.S. attorney for the Western District of Michigan, who’d been endorsed by organized labor unions, led by the United Auto Workers.

They also gave Jocelyn Benson, CEO of the Ross Initiative in Sports for Equality and head of the Wayne State University Law School for nearly four years, the nomination for secretary of state.

At the convention, Benson, who’d been the Democratic candidate for secretary of state in 2010, pledged to protect voting rights, to ensure secure elections and to make sure people can get in and out of branches offices in under 30 minutes.

Given the charged climate against immigrant communities, a widely diverse attendance, including Arab and Muslim Americans, had a major presence at the convention and were a deciding factor in the nomination process.

Several Arab Americans who are poised to appear on the November ballot also drew in considerable participation from the ethnic group, particularly from young people.

Candidates had a chance to speak to dozens of caucuses, including the Arab American and Yemeni caucuses, before all the attendees gathered in one room to vote for their preferred nominees.

The increased excitement had many wondering if a blue wave is imminent in Michigan, but some candidates are urging Democrats to not be presumptuous.

“There are so many Arab and Muslim Americans running, but the problem is we often struggle to unite when it comes to backing candidates. We need to voice our opinions and act as one at the polling booth.” – Hilal Bazzi, Fordson High School ASU president

State Rep. Abdullah Hammoud (D-Dearborn), who is seeking re-election, told The AANews that more candidates were interested in connecting with Arab Americans than before because they’re beginning to recognize that Arab Americans are “an influential minority because of our resources and ability to fundraise.”

He added that there was an overarching theme of inclusivity and standing up for civil rights at the convention and said he spoke of issues concerning the economy, investing in public schools, infrastructure and protecting the environment.

Despite these unifying messages among many Michiganders, Hammoud warned against assuming that the state will turn blue, saying that the Democratic Party is still being built in Michigan and that candidates should no longer rely on capturing their districts, but need to reach out more to conservative communities.

Fay Beydoun, third vice chair of the Michigan Democratic Party and executive director of the American Arab Chamber of Commerce, told The AANews that increased activism among youth and women this year has strengthened the progressive base, which she attributed to Nessel’s victory.

Beydoun said many were in “disbelief” as they expected Miles to win, but added that Nessel was clear on where she stood on issues, is well-qualified and “had a way of connecting with voters.”

“With all the changes and policies we’re seeing at national level relating to immigrants and bans, it’s very important that we have an attorney general who is understanding of these issues,” she said. “Dana will stand on the right side of the issues.”

Beydoun stressed the importance of party unity, even after the elections and regardless of who wins, and about getting results through grassroots initiatives.

He said that no matter where Arab Americans stood, what counted was that they’re part of the political decision-making process and are demanding inclusivity in government.

Ali Baleed, president of the Yemeni American Benevolent Association, said Arab Americans played a role in swaying the vote in Nessel’s favor. He added that almost every candidate made a stop to speak to the Arab American caucuses.

“Before, we used to go and look for them. Now, they come looking for us,” Baleed said, adding that at least 100 people were present at the Yemeni caucus.

However, he said he voted to nominate Miles, whom he saw as having the better chance of defeating a Republican challenger.

Fayrouz Saad, who is seeking to replace the retiring David Trott as the U.S. representative for the 11th district, said voters she spoke to signaled that they wanted change in government and leaders who are “truly progressive and are going to speak to those values.”

Saad said with confidence that she could flip the district blue, even if the seat wasn’t open.

She said that although there’s room for growth, the Arab American community has come a long way in terms of civil engagement and running for office, adding that she has seen a notable difference between today and when she worked to bring Arab American youth to be involved at Democratic caucuses about 14 years ago.

“What we’re seeing is that young people are paying attention, getting organized and making sure their voices are heard,” she said.

The difference maker will be uniting the Arab American vote and ensure the community won’t stop short of voting and only registering, she added.

“We shouldn’t assume there’s a blue wave coming,” Saad said. “We should continue to work hard and talk to voters. We’re going to create that blue wave.” Rashid Baydoun, vice chair of the Arab American caucus, said it has consistently attracted one of the largest number attendees among the caucuses and that he’s worked to bring about 40 youths from Dearborn schools to the convention.

He said many Arab Americans “100 percent” helped Nessel receive the nomination and that most of them supported her because of her understanding of the impact the travel ban has had on their communities, in part due to her experience as a prosecutor at the Wayne County Circuit Court.

Baydoun added that candidates are beginning to realize the power Arab Americans have in shaping politics, as they’ve become more spread out throughout the state, particularly in the 12th and 13th congressional districts.

“We need to highlight our narrative that’s being written and it’s something we should be celebrating,” he said. “The blue wave is coming, but where are we gonna be, on the sidelines watching the waves or helping shape policies?”

Hilal Bazzi, a senior at Fordson High School and president of the Arab Student Union (ASU), said attending the convention was a great opportunity to expose about 30 of his peers to the political process at an early age.

He said he’s attended three conventions and that there hasn’t been a level of excitement like this year. Many of the candidates who spoke at the Arab American caucus were concerned about the divisive rhetoric against their communities.

“We saw this blue wave in action,” Bazzi said. “There are so many Arab and Muslim Americans running, but the problem is we often struggle to unite when it comes to backing candidates. We need to voice our opinions and act as one at the polling booth.”