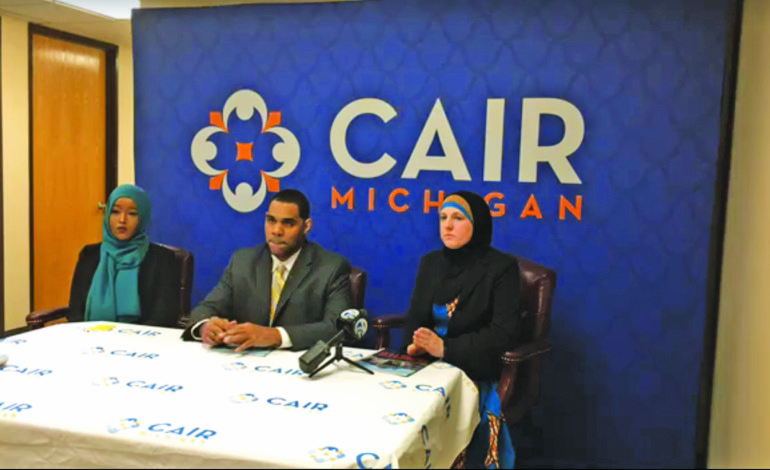 FARMINGTON HILLS – On Monday, April 23, the Michigan chapter of the Council on American-Islamic Relations hosted a press conference at its Farmington Hills offices and released its 2018 civil rights report. CAIR is the largest advocacy and civil liberties organization for American Muslims.

Dawud Walid, executive director of CAIR-MI, stated that he is a plaintiff in the federal lawsuit against the Trump administration’s Muslim ban that prohibits refugees and immigrants from predominantly Muslim countries to come into the United States.

“What makes Michigan a different state from all the other states where we have chapters is that not only do we have an airport with international flights to Muslim countries, we are on the border of Canada,” Walid said. “This will lead to an increase of interaction with customs border protection officers, so we have a different type of issue than states further down south that do not have flights to the Arab world.”

Walid also stated that CAIR has lawsuits pending against border patrol officers who ask Muslim Americans crossing to Canada on the Ambassador Bridge profiling questions like “Do you pray?” or “Do you pray at the mosque?”

“In this report we see an increase of bias incidents on campuses amongst students, and we see a rise in anti-Muslim bullying in school districts,” said Asha Noor, the programming and outreach director for The Safe Spaces Program at CAIR-MI.

“We often see teachers and administrators also perpetuating anti-Muslim views and also essentially being the bullies in these situations,” Noor added. “So, we’ve gone into these school districts and we’ve given training around these issues to try and create more diverse institutions. If you look at the report that came out you can see a few cases that were really high profiled here in Michigan and in California.”

Noor said one incident covered in the report concerned a nursing student who was forced out of her program because her instructor made comments about her accent and her likability because she was a visibly Muslim woman.

She said the instructor discouraged the woman from continuing in the program, “to the point that she failed out because she wasn’t getting fair treatment in terms of the grading.”

Noor also said these cases are very systemic and a look at the report will show how these cases pan out around the country.

“It [the report] is very problematic for the Muslim community, said CAIR-MI staff Attorney Amy Doukoure. “This is the first time in history where there has been an increased in amount of complaints against customs and border patrol… There has been an increased amount of FBI interactions against Muslims in the community. It’s very indicative of the Trump administration’s policy to target and discriminate against Muslims.”

She said this is one indication that the Muslim ban is unconstitutional and should be struck down by the U.S. Supreme Court.

“It shows that Muslims are being singled out for unfavorable treatment by every body of the government and that is an unconstitutional infringement on Muslims’ rights,” she said.