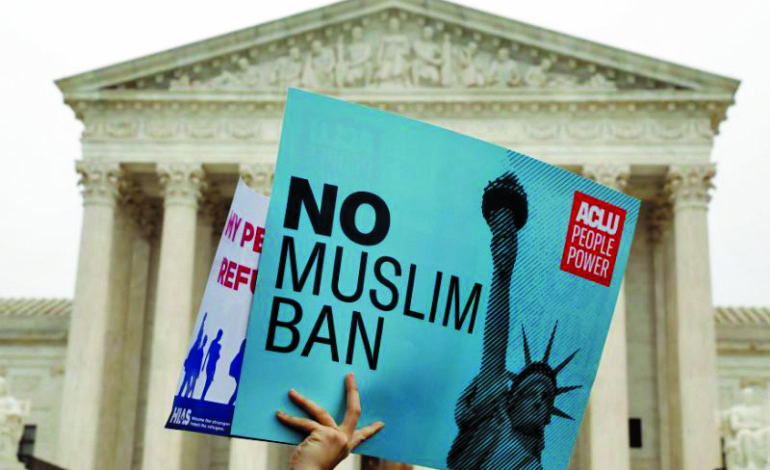 Conservative justices including Chief Justice John Roberts and Anthony Kennedy, a frequent swing vote on the nine-member court, indicated during arguments in the high-profile case their unwillingness to second-guess Trump on the national security justifications offered for the policy.

Trump has said the ban is needed to protect the United States from attacks by Islamic militants.

The challengers, led by the state of Hawaii, have argued the policy was motivated by Trump’s enmity toward Muslims. Lower courts have ruled against each of the three versions put forward by Trump of the travel ban, concluding they violated federal immigration law and the Constitution’s prohibition on the government favoring one religion over another.

But with five conservatives on the nine-member Supreme Court, Trump seemed likely to be on the winning side when the justices issue their ruling by the end of June.

“My only point is that if you look at what was done, it does not look at all like a Muslim ban,” Conservative Justice Samuel Alito said.

Some of the four liberal justices expressed sympathy toward Hawaii’s arguments, although it appeared possible at least one might eventually side with Trump.

Trump called for “a total and complete shutdown of Muslims entering the United States” as a candidate, and the travel ban has been one of the most controversial policies of his presidency.

The current version, announced in September, prohibits entry into the United States by most people from Iran, Libya, Somalia, Syria and Yemen. No one from those countries has carried out an attack in the United States.

In June and December 2017, the Supreme Court allowed two versions of the ban to take effect while court challenges ran their course. The justices had not until Wednesday heard arguments on the merits of the policy.

The challengers said the Congress historically has rejected nationality bans in immigration laws, and that Trump’s policy has circumvented that judgment.