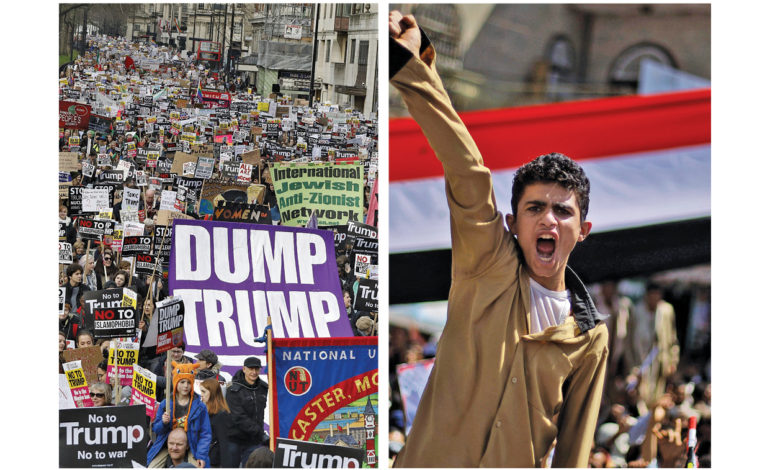 Recently, some comparative analysis has been in the mainstream media about the way in which, to take one example, American citizens led by the teenagers protested the dangerous availability of assault weapons on the one hand, and citizens of the Middle East, Yemen in particular, when, in a flashback to 2011, massive protests and demonstrations broke out as a general response on the theme of what has been called the “Arab Spring”, on the other hand.

Looking at this case in greater specificity, it has been noted that, in the U.S. case, people protested intensely and throughout the course of one day on the Gregorian calendar, but then promptly returned to their work and other life responsibilities on the following day, whereas in the case of Yemen, the protests that were formed continued for months and massive work stoppages and shortages were officially recorded, which has led to what we are experiencing lately: A diverse coalition government composed of members of the Islamic Brotherhood and General People ‘s Congressional Party, followed by the Houthis taking control of the capital city and many other governorates; and consequently a war has been launched by the Saudis, with air strikes raining down upon Yemen, mainly Sana’a, the capital city, from March 2015 until the present day.

Returning to the general comparison of American and Yemeni citizenry, it will be ventured to say that U.S. citizenry in particular, and American culture in general, while admittedly not perfect, has the realization that they, as citizens of the U.S., represent something that has lasted since before their birth, that exists as a way of giving them opportunities for their lives and those of their children, and will continue to be so after they pass away. While they can disagree with each other about matters such as religion, or politics, or economy, or society, they realize that the secular state depends upon them to allow life to continue. People who work in industries that are vital to the preservation of U.S. life, in fields as diverse as transportation, education and finance, are mandated to go back to work. The U.S. as a country will not “shut down” because the U.S., collectively, has decided that the country is a bigger interest, and demands more loyalty, than any one city, or region, or individual demographic of people.

While Yemen, as a nation, certainly has much of a linguistic culture and related history to offer the rest of the world, the circumstance that its civil society can effectively be shut down indefinitely in response to a perceived slight, carries some dangerous implications about its viability to be truly considered, or to become, a “nation.” While one Yemeni or another may disagree about what color of Dishdasha to wear, all Yemenis must surely agree that having potable, clean water is a more important right which can be seen as crucial for the entire nation.  When outside interests then invade places like Yemen, with the tacit or open approval of some citizens of this nation, it calls into question the very existence of Yemen as a nation, and to whether it is possible for individual Yemenis to allow all of their citizenry to enjoy the same levels of privileges and responsibilities.

There are three outstanding characteristics upon the ability to explain and analyze the difference between the two groups of protesters: The characteristics of commitment, loyalty and perseverance versus laxity, egotism and discontinuity (respectively). Looking closer at the first three descriptors, those are suitable to describe the behavior of American citizens: The commitment to follow through on their impulse to disagree with national policy combined with loyalty to realize that, while their cause is both valid and worthy of protest, their allegiance to their nation overcomes even the most noble of causes and perseverance to continue working for the ideals of the nation that they serve. Unfortunately, the last three terms may be assigned to their Yemeni counterparts: Yemeni citizens may suffer laxity to the degree that they forget or ignore their other responsibilities to family and nation.

To wit, there is nothing at all wrong with protesting in a free society on a Saturday as long as you remember to go back to work the next day. To continue, Yemenis may be demonstrating egotism to the degree that they will continue to protest a situation that will not go away, in spite of their best efforts, and discontinuity to the degree that they seem to be all too willing, in an echo from the Vietnam war, to “destroy a village so as to (best) save it.”

Moreover, it has been noted that those protesters even attacked police and electric power substations and installations, under the false assumption that such tactics could potentially cause damage to regimes in general when the extent of its mischief only served to harm the public at large. That must be the worst understanding of what revolution really means and an element that will never be conceptualized by any participants or actually considered in any U.S. protests.

In closing, this article is not trying to make any sweeping generalizations or tendencies on the part of any ethnic group or geographic region of the world. All people around the world are capable of, alternately, exceeding our wildest expectations or plumbing depths of depravity heretofore unrealized, in the way and manner in which they treat all of their human brothers and sisters. Moreover, it is impossible to be perfect, whether we act as individuals or as representatives of a nation, or to act in an inoffensive way to all people on any given question or set of circumstances. However, in the interest of pursuing a better and more predictable life for all who desire it, the comparison itself was necessary to elucidate.