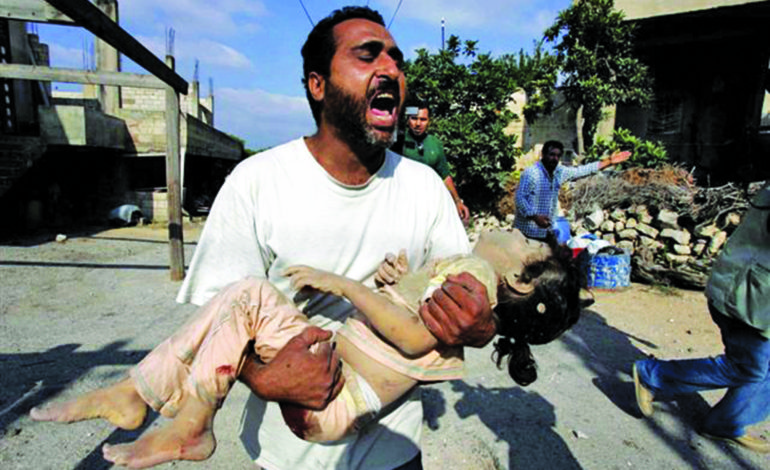 File photo of rescuers lifting a dead girl from rubble of Qana massacre on April 18, 1996

The wars America fights and funds often happen in far-away places. To make killing less easy, we need to learn to dwell on the visual evidence that follows war, to humanize and individualize “collateral damage.”

Until Wednesday, I had never seen pictures of the kids in Qana. Those from the first massacre. Qana was attacked twice, once in 1996 and the second time in 2006.

Wednesday, April 18 marked the 22nd anniversary of the first Qana massacre, when more than 100 Lebanese civilians, half of them children, were killed by Israeli artillery shells aimed at the U.N. compound designated as a safe haven in the village of Qana, where these people, and hundreds more, had sought refuge.

At work, I scrolled through the Google image page and cried. And cried and cried.

Then I got up, went to the bathroom, washed my face, fake-smiled in the mirror and went back to my desk.

An hour later, I googled “Sabra and Shatila”, another massacre—or rather, slaughtering—of between 700 and 3500 people in Lebanon that had taken place about a decade earlier.

When I was younger, my dad would cover my eyes whenever an image of a wounded or dead person appeared on the Arabic news channels. I sometimes peeked through the spaces between his fingers. The spaces grew as I did.

When I was younger, my dad would cover my eyes whenever an image of a wounded or dead person appeared on the Arabic news channels, which are far less censored than their American counterparts.

I sometimes peeked through the spaces between his fingers. The spaces grew as I did.

He wasn’t trying to lie to me about the way wars play out, about what “collateral damage” looks like. He was only waiting until I could handle the whole truth—a privilege far too many children are not afforded.

I googled “Qana massacre” that morning because I thought I was ready to face in full the ugliness of the humanity in which I have an imposed share.

As I write this, I cannot help but think of how lucky I am not to have had truth force its way in.

What does it mean to be “ready” to look at dead children? At mothers crying over their children’s bodies? At children holding their parents’ remains as though holding onto life itself, a life they already know they’ve lost?

What does it mean to look at “collateral damage?”

The night before, I had watched “3000 Nights,” a film staged in the 1980s about a pregnant Palestinian woman in an Israeli prison. Afterwards, I felt this insatiable need to know more about the truth of what happened in Lebanon following the Nakba, a truth I had been piecing together from stories, but that was never whole enough to in turn do the work that truths do, to unravel me.

I have heard and read about Israel’s war crimes against civilians, especially Palestinians. I know about the children’s bodies cut up into tiny bits by cocaine-infused soldiers, the girls and women who were gang-raped over and over and over again.

How does one find hope after looking into the life-robbed eyes of a child?

I have wondered for my entire life how my people, and so many other peoples whose stories I do not know, gather the energy to live and to love after they know war, after they have lived through unhinged evil.

I think of my dad, a refugee who grew up in and through war.

While I do not know how he finds all the love he shares with me and my mom and my brothers, with his patients and his friends and his family, and with complete strangers, thanks to him and to the thousands of strong women and men, victims of war with whom I have crossed paths, I know it can be done.

That there is always love to be found, and always hope in that.

Where and how, I cannot say for sure, although I have a sense that it comes from some visceral awareness of human fragility, and the strength to be forged therein.

Mary Turfah is a graduate of Yale University, born and raised in Dearborn Heights.