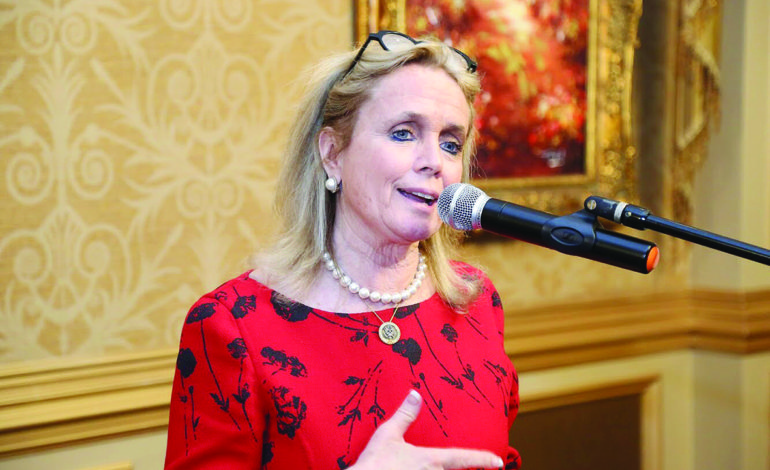 DEARBORN — On May 3, Arab American supporters of U.S. Rep. Debbie Dingell (D-Dearborn) held a fundraiser to re-elect the congresswoman. Speakers were Osama Siblani, publisher of The Arab American News; Sam Beydoun, a real estate broker and candidate for Wayne County Commission; ACCESS Executive Director Hassan Jaber and Congresswoman Dingell, who spoke about her strong relationship with the community for decades before she was elected to Congress in November 2016.  Dingell’s husband and predecessor, John D. Dingell, 91, the former dean of the Congress, stole the show with his presence.

In his opening remarks, Siblani lauded Dingell’s efforts in raising the community’s issues in the Congress.

“Debbie not only does a great job in Washington on behalf of our state and our community, she has always worked with our community hand-in-hand, before her election in 2016,” he said.

Siblani urged the audience to support Dingell’s campaign to ensure she would remain the last standing candidate.

“We are living in a critical time,” he said. “We cannot rest assured that she won’t face a challenger. Everything is possible and therefore we must support her with money and votes to continue the fight.”

Jaber said Dingell has been loyal to her husband’s legacy and that John Dingell was an exceptional leader during his tenure in Congress. During that time Debbie Dingell was supportive of community issues, and continues to stand by the community.

“We, as Arab Americans, must fight for our rights and against the travel ban,” Jaber said, referring to President Trump’s efforts to restrict immigration from several Muslim-majority countries. “Therefore, Debbie must remain in the U.S. House of Representatives because what we are facing is very dangerous.”

Beydoun, thanked both John and Debbie Dingell for their support of his campaign. He praised their championing of Arab and Muslim American rights, particularly in the aftermath of the September 11, 2001 attacks.

In her speech, Rep. Dingell thanked the Arab American community for its support of her election to a second term, noting that the changes associated with Trump’s presidency require strong cooperation and action.

“We’ve got to really work together to put those issues forward and not be afraid,” she said. “We need to make sure that we’re present where decisions are being made.”