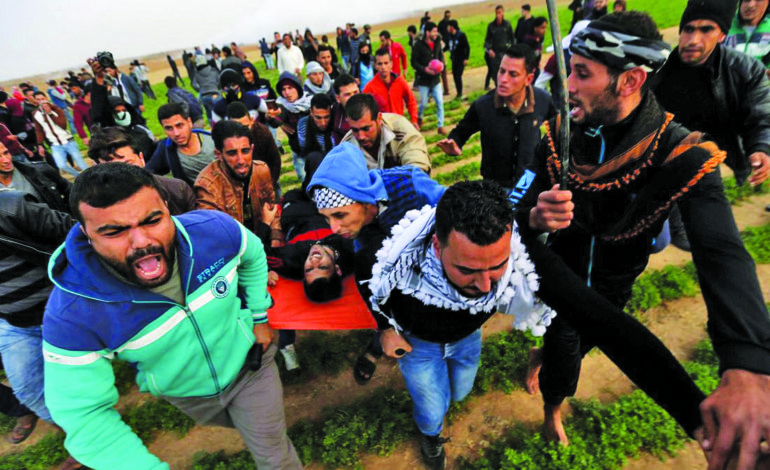 Three more Palestinians were killed and 611 wounded last Friday, when tens of thousands of Gazans continued their largely non-violent protests at the Gaza-Israel border.

Yet as the casualty count keeps climbing — nearly 45 dead and more than 5,500 wounded — the deafening silence also continues. Tellingly, many of those who long chastised Palestinians for using armed resistance against the Israeli occupation are nowhere to be found, while children, journalists, women and men are all targeted by hundreds of Israeli snipers who dot the Gaza border.

Israeli officials are adamant. The likes of Defense Minister Avigdor Lieberman perceives his war against the unarmed protesters as a war on terrorists. He believes that “there are no innocents in Gaza.” While the Israeli mindset is not in the least surprising, it is emboldened by the lack of meaningful action or outright international silence to the atrocities taking place at the border.

The International Criminal Court (ICC), aside from frequent statements laced with ambiguous legal jargon, has been quite useless thus far. Its chief prosecutor, Fatou Bensouda, derided Israel’s killings in a recent statement, but also distorted facts in her attempt at “even-handed language”, to the delight of Israeli media.

“Violence against civilians — in a situation such as the one prevailing in Gaza — could constitute crimes under the Rome Statute of the International Criminal Court … as could the use of civilian presence for the purpose of shielding military activities,” she said.

Encouraged by Bensouda’s statement, Israel is exploiting the opportunity to deflect from its own crimes. On April 25, an Israeli law group, Shurat Hadin, sought to indict three Hamas leaders at the ICC, accusing Hamas of using children as human shields at the border protests.

It is politically convenient to criticize Palestinians as a matter of course, and utterly inconvenient to credit them, even when they display such courage, prowess and commitment to peaceful change.

It is tragic that many still find it difficult to grasp the notion that the Palestinian people are capable of mobilizing, resisting and making decisions independent from Palestinian factions.

Indeed, for the nearly decade-long Hamas-Fatah feud, the Israeli siege on Gaza and throughout the various destructive wars, Gazans have been sidelined, often seen as hapless victims of war and factionalism, and lacking any human agency.

Shurat Hadin, like Bensouda, are all feeding into that dehumanizing discourse.

By insisting that Palestinians are not capable of operating outside the confines of political factions, few feel the sense of political responsibility or moral accountability to come to the aid of the Palestinians.

This is reminiscent of former President Obama’s unsolicited lecture to Palestinians during his Cairo speech to the Muslim world in 2009.

“Palestinians must abandon violence,” he said. “Resistance through violence and killing is wrong and does not succeed.”

He then offered his own questionable version of history of how all nations, including “Black people in America”, the nations of South Africa, Southeast Asia, Eastern Europe and Indonesia, fought and won their freedom by peaceful means only.

This demeaning approach — of comparing supposed Palestinian failures to others’ successes — is always meant to highlight that Palestinians are different, lesser beings who are incapable of being like the rest of humanity.

Interestingly, this is very much the core of the Zionist narrative about the Palestinians.

That very notion is often presented in the question, “where is the Palestinian Gandhi?” The inquiry, often asked by so-called liberals and progressives, is not an inquiry at all, but is a judgment — and an unfair one at that.

Addressing the question soon after the last Israeli war on Gaza in 2014, Jeff Stein wrote in Newsweek, “The answer has been blown away in the smoke and rubble of Gaza, where the idea of non-violent protest seems as quaint as Peter, Paul and Mary. The Palestinians who preached non-violence and led peaceful marches, boycotts, mass sit-downs and the like are mostly dead, in jail, marginalized or in exile.”

Yet, astonishingly, it is being resurrected again, despite the numerous odds, the unfathomable anger and unrelenting pain.

Tens of thousands of protesters raising Palestinian flags continue to hold their massive rallies across the Gaza border.

Despite the high death toll and the thousands maimed, they return every day with the same commitment to popular resistance that is predicated on collective unity, beyond factionalism and politics.

But why are they still being largely ignored?

Why isn’t Obama tweeting in solidarity with Gazans? Why isn’t Hillary Clinton taking the podium to address the unremitting Israeli violence?

It is politically convenient to criticize Palestinians as a matter of course, and utterly inconvenient to credit them, even when they display such courage, prowess and commitment to peaceful change.

The likes of famed author J.K. Rowling had much to stay in criticism of the peaceful Palestinian boycott movement, which aims at holding Israel accountable for its military occupation and violations of human rights. But she became mute when Israeli snipers killed children in Gaza while cheering whenever a child falls.

The singer Bono of the band U2 dedicated a song to late Israeli President Shimon Peres, accused of numerous war crimes, but his voice seems to have grown hoarse as the Gaza boy, Mohammed Ibrahim Ayoub, 15 was shot by an Israeli sniper while protesting peacefully at the border.

However, there is a lesson in all of this. The Palestinian people should have no expectations of those who have constantly failed them. Chastising Palestinians for failing at this or that is an old habit, meant to simply hold Palestinians responsible for their own suffering, and to absolve Israel from any wrongdoing. Not even Israel’s “incremental genocide” in Gaza will change that paradigm.

Instead, Palestinians must continue to count on themselves, to stay focused on formulating a proper strategy that will serve their own interests in the long run— the kind of strategy that transcends factionalism and offer all Palestinians a true roadmap to the coveted freedom.

The popular resistance in Gaza is just the beginning; it must serve as a foundation for a new outlook, a vision that will ensure that the blood of Mohammed Ibrahim Ayoub is not spilled in vain.