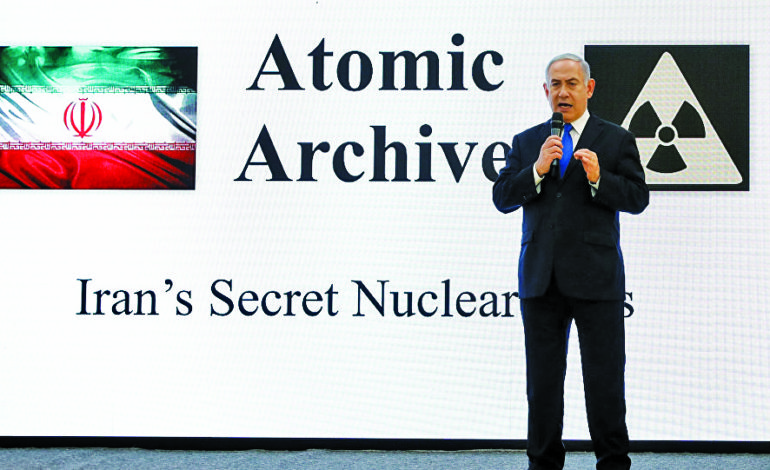 In response to Netanyahu, Iranian Foreign Minister Javad Zarif declared in a tweet, “The boy who can’t stop crying wolf is at it again.” As I carefully documented in my book, Israeli officials have since 1992 continuously attempted to convince the international community that Iran is developing nuclear weapons – all while refusing to discuss its own nuclear capabilities.

The Israeli leader’s PowerPoint presentation has – in a remarkable coincidence – come just ahead of a key deadline for President Trump to decide on whether to withdraw from the agreement. Past and present Israeli allegations aside, Netanyahu offered no substantive evidence that Iran is violating the JCPOA. Much of his presentation focused on Iran’s nuclear program in the years before it signed the deal; Iranian compliance with the accord has been repeatedly confirmed by the International Atomic Energy Agency (IAEA) and U.S. security and intelligence officials. Regardless, Netanyahu has probably given Trump more impetus to do what he’s wanted to do since his campaign undo the Iran nuclear deal.

Over the past 15 months, Tehran has accused Trump of failing to live up to U.S. commitments on sanctions relief under the deal by encouraging other countries not to do business with Iran. (White House spokeswoman Sarah Sanders has said that last year Trump specifically asked more than a dozen foreign leaders “to stop doing business with nations that sponsor terrorism, especially Iran.”)

Implicit in Trump’s approach is that he can bully and pressure Iran into meeting his demands. However, the track record of U.S.-Iran relations since the 1979 Iranian revolution leaves little room to believe that Iran concedes to pressure. As a former Iranian diplomat who served as the chairman of the Foreign Relations Committee of Iran’s National Security and spokesman for Iran’s nuclear negotiating team, I know from firsthand experience that Tehran responds to pressure by doing everything it can to produce leverage for itself. The modus operandi of Iranian leaders when it comes to addressing pressure is to become inflexible, steadfast and retaliatory. This was evident during the nuclear dispute from 2002 to 2015, when in reaction to the longstanding U.S. demand of zero uranium enrichment on Iranian soil, Iran greatly expanded its nuclear program. The key to the July 2015 nuclear deal was not U.S. sanctions, but the United States accepting Iran’s bottom line: Acknowledgement of its uranium enrichment program and nuclear fuel cycle infrastructure.

The Iran-Iraq War is also testament to the fact that Iran does not buckle under even the most egregious pressure. During the brutal eight-year conflict, Iraq’s Saddam Hussein was supported by most global powers and regional Arab states. U.S. assistance to Saddam included intelligence sharing and helping Saddam acquire chemical and biological weapons precursors – weapons he used to devastating effect on Iranians and his own Kurdish population. Nonetheless, Iran emerged from the war with its territorial integrity intact.

If Trump withdraws from the JCPOA, he should not do so thinking Iran is vulnerable and in dire straits. Contrary to the perception of some in Washington, Iran’s key economic indicators are strong and growing. Its GDP grew 11 percent last year, average real per capita income is on the rise, and the price per barrel of oil is hovering around $70 and on an upward trajectory. Politically, President Hassan Rouhani seems secure after being re-elected with a significant margin over his nearest rival last May.

Importantly, the protests that rocked parts of Iran some months ago should be seen in the context of ever-competitive Iranian domestic politics, along with genuine economic grievances derived from dashed expectations regarding the benefits of sanctions relief and subsidy reforms made in Iran’s national budget.

However, it is vital to understand that such protests are not indicative of imminent widespread turmoil or unrest. I was in Iran during this period and witnessed firsthand the disconnect between how the protests were covered in the West and the reality on the ground. Not only were the protests far smaller than made out to be, but the massive pro-government demonstrations that took place in subsequent weeks received scant coverage. Iran is also far from isolated on the international stage, maintaining amicable ties with Europe and increasingly strategic relationships with global powers such as China and Russia. Rouhani recently paid a state visit to India, where he signed numerous trade agreements, and has travelled to Russia and Turkey in recent months.

Trump would be committing a major strategic miscalculation if he believes that withdrawing from the nuclear deal leaves Iran with no options but to continue abiding by the agreement. Rather, Tehran’s adherence reflects the strength of its commitment to its international commitments and eagerness to build confidence with Europe and other international partners. If Trump withdraws, Iran could use the deal’s main dispute mechanism to refer U.S. non-compliance to the U.N. Security Council. That would isolate Washington and needlessly set it on a path of dangerous escalation with Iran. Abrogation of the agreement could also allow Iran to justify ramping up its nuclear program.

The end state to Trump’s approach on Iran could very well be war. Such a conflict will not only portend devastating consequences for the United States and Iran, but further destabilize the Middle East as it tries to move on from the scourge of ISIS.

However, Trump has a policy alternative: Diplomacy. The diplomatic option is possible today and does not require aggressive posturing to be successful. If Trump really wants “bigger deals” with Iran, he should build trust by properly implementing the JCPOA, and then engage Iran with respect and not insults.

-Seyed Hossein Mousavian is a Middle East security and nuclear policy specialist at Princeton University, former spokesperson for Iran’s international nuclear negotiations and author of “Iran and the United States: An Insider’s View on the Failed Past and the Road to Peace.” @HMousavian.