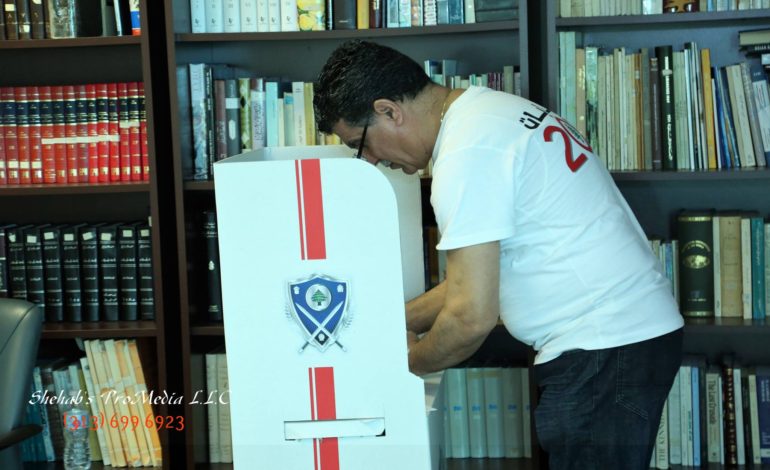 A Lebanese American voting in a precinct inside the Consulate General of Lebanon, Southfield, MI

By Farah Harb and Hassan Khalifeh
The Arab American News

DEARBORN — On April 29, the Lebanese community in the U.S. voted for the first time in the Lebanese Parliamentary elections, which will be held in that country on May 6.

In Michigan, Lebanese expatriates came out in droves to the three voting centers located at the Lebanese Consulate in Southfield, the Macedonian Cultural Center in Sterling Heights and the Ford Community & Performing Arts Center in Dearborn.

Flaunting fresh purple ink on their thumbs, many of Metro Detroit’s Lebanese Americans said they were thrilled to take part in their country of origin’s decision-making process. They hoped to shake up a stagnant parliament, as this year brings a significant number of new candidates, including women.

According to the Lebanese Consulate, more than 10,000 registered voters are registered in the United States, including about 800 in Dearborn.

Suzan Mouzi-Yassine, the consul general of Lebanon in Detroit, said 2,245 Lebanese who reside in the consulate’s jurisdiction covering 14 Midwestern states are registered to vote in the election.

“This voting process will affect me and my kids,” said Aiman Elashker, one of the voters at the Dearborn polls, when asked why he was voting. “End of the day this is our country as well, and if I don’t do it, I will feel like I am missing something.”

He added that people do their duties by voting.

“If all of us thought it would not make a difference it won’t, but it has to,” he said.

The election in Michigan wasn’t without its own complications and slow-moving lines, as some voters’ names did not appear on lists at the precincts, although they were registered.

Some names were divided between polling stations at different locations. Voters who went to cast a ballot in Dearborn and couldn’t find their names had to drive to Southfield to do so, for example.

“We should have more people trying to help and more organization,” said one of the voters in Dearborn about the voting process.

“A lot of people who registered their names to vote are not coming up on the list,” said voter Hussein Nagib Sobh. “The guys that were responsible for putting up this information never had a chance to finish all that, so there are a lot of people who want to vote but did not vote right now.”

“From my household, I’m the only name that came up; three of them didn’t,” said another voter.

Mouzi-Yassine was present at all three centers to facilitate the process for the voters. She told The AANews that things went smoothly when the six polling stations the Lebanese Consulate oversaw in Michigan, Illinois, Ohio and Minnesota opened at 7 a.m. local time.

She acknowledged that a portion of voters experienced minor complications, as some presented old passports or I.D.s and could not vote.

Mouzi-Yassine added that the Consulate anticipated minor glitches and hoped to learn from them and improve the process in time for the next election.

However, she said most voters were cooperative and excited to take part in the Lebanese election after waiting for the opportunity for nine years.

Although many Lebanese expatriates who have established deep roots in the U.S. give little consideration to the political activity in their homeland, the consul general said voters came out because they still believed in the greatness of Lebanon and the potential for their votes to turn that country’s beaten-down economy and leadership around.

She thanked everyone who registered and voted without fear or hesitation.

As reported by The AANews, some Lebanese Americans were concerned that casting their ballot with Hezbollah candidates checked off, whether intentionally or not, could make them material supporters of terrorism under federal law and they could face harassment at border checkpoints and airports.

Mouzi-Yassine said the ballots were en route to Lebanon on the evening of May 2 and now sit at the Central Bank of Lebanon in Beirut, where they await to be opened on May 6.