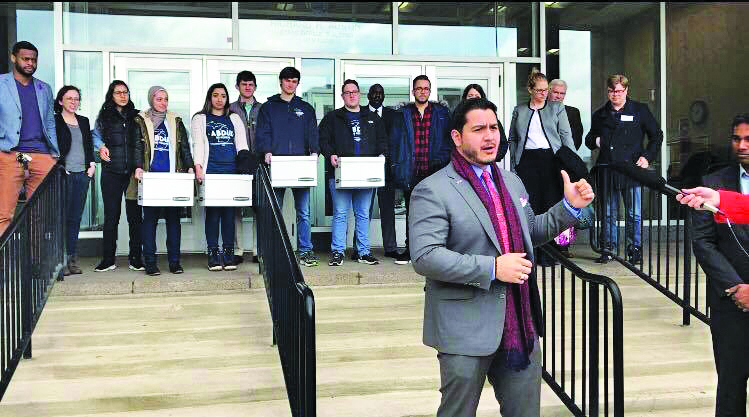 LANSING – In an increasingly heated battle to remove one other from the ballot this primary election, Democratic gubernatorial candidate Shri Thanedar is challenging rival Abdul El-Sayed’s eligibility to run for office. The two are running against Gretchen Whitmer in the Democratic primary.

Thanedar filed the complaint with the Secretary of State’s Office on May 1, urging that its election bureau decide on the matter, once and for all.

Questions about El-Sayed’s eligibility began with a Feb. 5 Bridge Magazine article alleging that he might not be able to seek the governor’s seat because he lived in New York from October 2013 to March 2015 while he was a professor at Columbia University. The state’s constitution mandates that a candidate must be a registered voter for at least four years prior to filing his or her petition.

“This move should not be construed as a personal attack,” Thanedar said in a press release. “I believe a candidate with standing in this race must step up and challenge Mr. El-Sayed’s eligibility to resolve this issue once and for all.”

But the Secretary of State’s office confirmed El-Sayed had been simultaneously living in Michigan since 2003.

“As we’ve long held, Abdul is 100 percent eligible to be governor, but that won’t stop candidates from futile attempts at using this manufactured controversy as a smokescreen for their hapless and cruel abuses of both people and animals,” said El-Sayed spokesperson Adam Joseph, referencing a report that a pharmaceutical testing lab owned by Thanedar had abandoned more than 100 dogs and monkeys in 2010 before a court intervened.

El-Sayed is suing the Secretary of State, forcing a court to rule if he was eligible. The court has not yet decided, but Secretary of State attorneys argued the case was premature and should be dismissed since there was not yet a challenge to his eligibility when the suit was filed.

Robert Lenhard, an attorney and former chairman of the Federal Elections Commission, with whom El-Sayed’s campaign has consulted, said he was confident El-Sayed is qualified to run.

“He has been a property owner, a taxpayer, a registered voter and a resident of Michigan throughout the qualifying period under state law,” Lenhard said in a statement. “Michigan law has never held that absences from the state for school or work cause you to lose your residence. This issue is just a red herring.”

El-Sayed has raised about $2 million this election cycle.