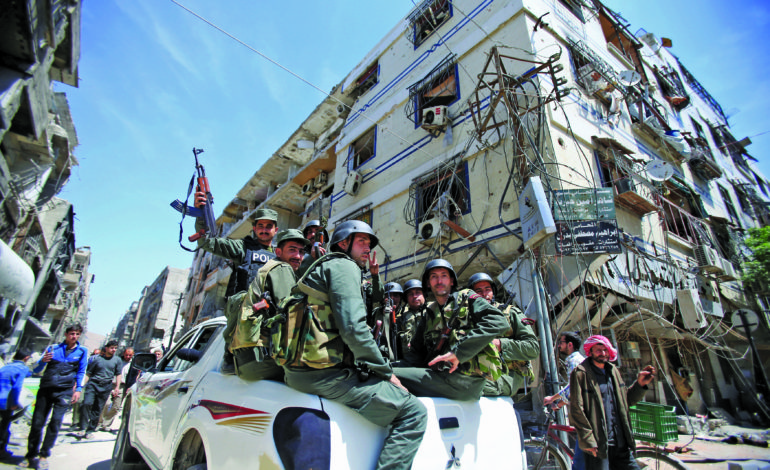 Members of the Syrian police hold their weapons as they sit on the back of a truck at the city of Douma, Damascus, April 16 - Photo by Reuters

BEIRUT — Syrian militants accepted a deal on Wednesday to quit their enclave near Homs city, a militant official said, as the Syrian army crushes the last two besieged insurgent pockets in the country.

The agreement, which Russia brokered, would restore state rule, with fighters handing over their heavy weapons, the Syrian official in Homs province said.

Militants and civilians who refuse to settle with the state will be taken to insurgent territory in the north near the Turkish border in an evacuation expected to start on Saturday, he added.

There was no immediate comment from Damascus or Moscow. State news agency SANA had said late on Tuesday that a preliminary deal was reached with similar terms.

The enclave, the most populous zone still under siege in Syria, had seen heavy fighting and bombing in recent days. It includes the towns of Houla, Rastan and Talbiseh and villages around them, on a main highway between the cities of Homs and Hama.

Militants in the second pocket, south of the capital, have also effectively agreed to a surrender deal though they have yet to evacuate.

Army offensives and such local agreements have helped Damascus regain control of swathes of the country, with support from Russia and Iran.

Last week, a Syrian government minister said the enclave north of Homs city was the army’s next target after retaking all insurgent territory around the capital.