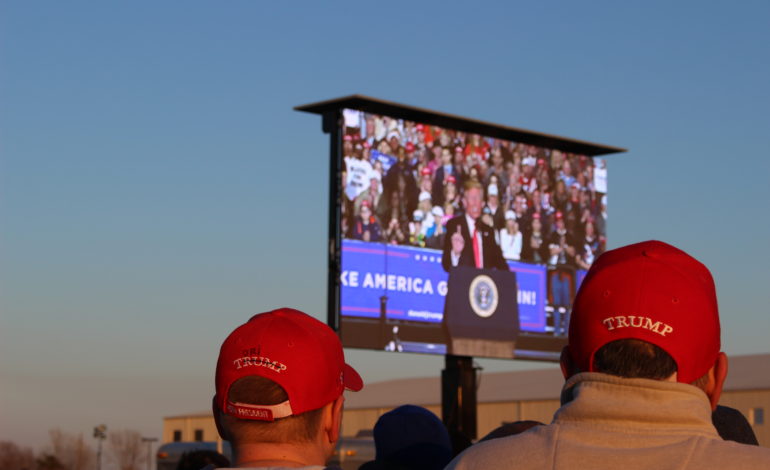 WASHINGTON, MI — While the First Amendment and award-winning journalism were being honored at the White House Correspondents Association’s annual dinner in Washington, D.C. on April 28, President Trump held a speaking event at Total Sports Park in Washington, Michigan. It was the second year in a row the president skipped the White House correspondents dinner in lieu of another event.

Trump spoke to thousands of supporters for about 90 minutes and touched on a variety of topics, including moving the United States embassy to Jerusalem and the cost of doing so. The topic drew large cheers from the crowd.

During his speech Trump said the new embassy was originally going to cost $1 billion. He told the crowd he delayed the cost to taxpayers by restructuring the deal with U.S. ambassador David Friedman.

The $150,000 will transform a portion of an existing consular building in Jerusalem into a temporary embassy until a permanent embassy can be constructed.

The White House is still working to fund the permanent embassy in Jerusalem; even considering private donations for funding.

In February the Associated Press reported that the White House is determining the legality of having Sheldon Adelson, a Las Vegas casino magnate, fund a portion of the embassy. It reported that Adelson offered to, “pay the difference between the total cost – expected to run into the hundreds of millions of dollars — and what the administration is able to raise.”

“I came out to see President Trump,” Overholser said. “Of course he loves Michigan and Michigan loves him and just loved to hear what he has to say.”

Overholser said that he supported the president’s decision to move to embassy.

“Jerusalem, they stand with us,” he said. “Where America stands Jerusalem stands behind us, and I think it’s great to have a president who loves Jerusalem and loves Israel as much as they love us.”

One attendee from Armada, a village in Macomb County, also agreed with the decision to move the embassy.

“It’s a big deal,” said the man, who did not want to be named. “It’s something you need to do, it’s the right thing to do. I think that the country of Israel should be allowed to decide where their capital is and we should put our embassy in the capital, that’s all.”

Nicholas Cooley a high school senior from Belleville, attended with a few of his friends. He said they’re from a liberal area and wanted to be around some like-minded people for a change.

An attendee from Redford who did not want to be named told the AANews he attended the event, “to support our president.”

“I think most of all Biblically,” he said. “Ya know the Bible says support and pray for our leaders.”

The Washington Post pointed out that Trump made a public attempt to blackmail Sen. Jon Tester (D-Mont.) at the event because of Tester’s handling of Rear Adm. Ronny L. Jackson’s nomination to be United States Secretary of Veterans Affairs.

“I know things about Tester that I could say, too,” Trump said to the crowd. “And if I said them he’d never be elected again.”

The crowd erupted in cheers.

Jackson has since withdrawn his name from consideration.

Those who were unable to get a seat inside the venue watched the president on a giant screen set up outside.