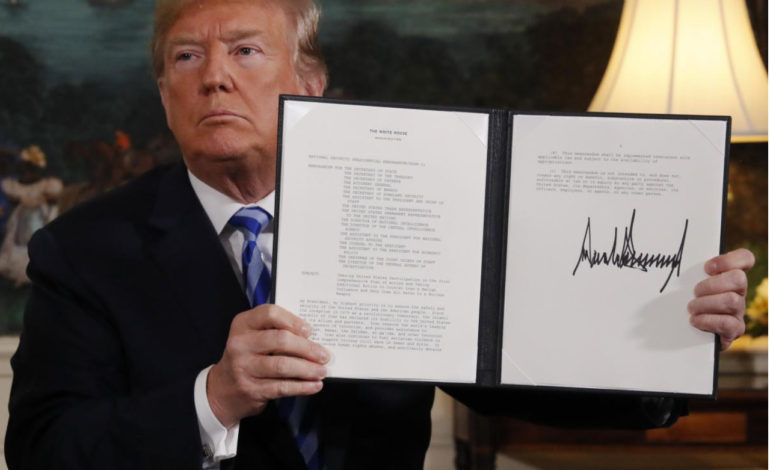 President Trump displays a presidential memorandum after announcing his intent to withdraw from the JCPOA Iran nuclear agreement in the Diplomatic Room at the White House in Washington, U.S., May 8, 2018. REUTERS

NEW YORK – Less than one third of Americans agrees with President Trump’s decision to pull the United States out of an agreement to limit Iran’s nuclear program, according to a Reuters/Ipsos national opinion poll released on Tuesday.

The poll, conducted May 4-8, ahead of the Republican president’s announcement to end the deal, found that 29 percent of adults wanted to end the deal with Iran and five other world powers to ease sanctions and limit Iran’s nuclear program.

Even among those who are registered as Republicans, less than half – 44 percent – advocated ending the U.S. involvement in the deal. Another 28 percent wanted to remain, and the remaining 28 percent said they did not know.

Trump, who has long criticized the 2015 agreement for not being tough enough on Iran, announced that he was terminating America’s involvement and would impose the “highest level” of economic sanctions against the country.

Many Americans also appeared to be concerned about what would happen if Trump pulled the United States out of the deal.

Nearly two out of three adults said that if the United States ended its agreement, Iran would likely announce that it was developing nuclear weapons. About half said they thought it would be likely that the United States and Iran “will enter into armed conflict.”

The Reuters/Ipsos poll was conducted online in English throughout the United States. It gathered responses from 1,277 adults, including 492 registered Republicans. It has a credibility interval of 3 percentage points for the entire sample and 5 percentage points for registered Republicans, meaning that the results could vary by that much in either direction.