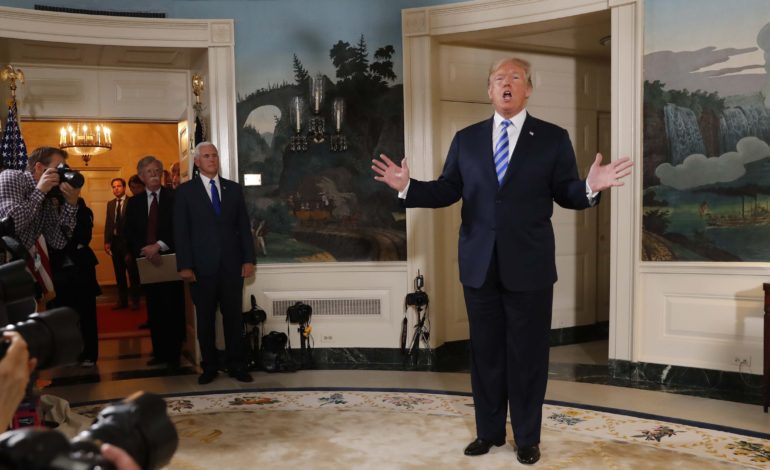 President Trump reacts to a question from the media after the president announced his intention to withdraw from the Iran nuclear agreement during a statement in the Diplomatic Room at the White House in Washington, D.C., May 8 - Reuters

WASHINGTON, D.C. — President Trump on Tuesday pulled the United States out of an international nuclear deal with Iran, raising the risk of conflict in the Middle East, upsetting European allies and casting uncertainty over global oil supplies.

Trump’s decision is a snub to European allies such as France, Britain and Germany that are also part of the Iran deal and tried hard to convince the U.S. president to preserve it. The Europeans must now scramble to decide their own course of action with Tehran.

“We had an opportunity to make the Iran deal stronger and to make the United States and our allies safer,” he Petere said. “Today, it appears the Administration, through lack of proper preparation and planning, has failed to capitalize on that opportunity.”

“As we await international responses to the U.S. withdrawal, there is no doubt in my mind that that the current Administration has deliberately chosen to weaken our credibility and diplomacy in a way that will be difficult to repair,” Lawrence said. “As a member of Congress, I will continue to fight for the safety and diplomacy of our great country.”