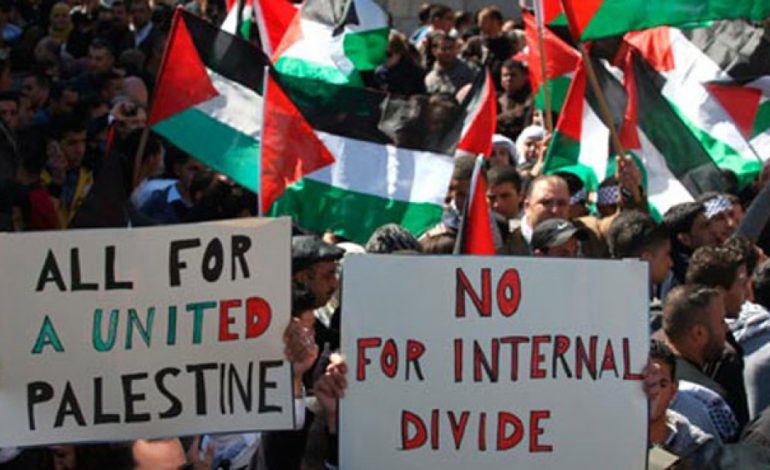 Palestinian demonstrators in Ramallah calling for political unity between Gaza's Hamas rulers and the Fatah-dominated Palestinian Authority, which rules from Ramallah in the West Bank - Photo by AFP

The Gaza border protests must be understood in the context of the Israeli occupation, the siege and the long-delayed “Right of Return” for Palestinian refugees. However, they should also be appreciated in a parallel context: Palestine’s own factionalism and infighting.

Factionalism in Palestinian society is a deep-rooted ailment that has, for decades, thwarted any unified effort at ending the Israeli military occupation and Apartheid.

The Fatah and Hamas political rivalry has been catastrophic, for it takes place at a time that the Israel colonial project and land theft in the West Bank are occurring at an accelerated rate.

In Gaza, the siege continues to be as suffocating and deadly. Israel’s decade-long blockade, combined with regional neglect and a prolonged feud between factions have all served to drive Gazans to the brink of starvation and political despair.

The mass protests in Gaza, which began on March 30 and are expected to end on May 15, are the people’s response to this despondent reality. It is not just about underscoring the Right of Return for Palestinian refugees. The protests are also about reclaiming the agenda, transcending political infighting and giving voice back to the people.

Inexcusable actions become tolerable with the passing of time. So has been the case with Israel’s occupation that, year after year, swallows up more Palestinian land. Today, the occupation is, more or less, the status quo.

The Palestinian leadership suffers the same imprisonment as its people and geographic and ideological differences have compromised the integrity of Fatah as much as Hamas, deeming them irrelevant at home and on the world stage.

But never before has this internal division been weaponized so effectively so as to delegitimize an entire people’s claim for basic human rights. “The Palestinians are divided, so they must stay imprisoned.”

The strong bond between President Trump and Israeli Prime Minister Benjamin Netanyahu is being accompanied by a political discourse that has no sympathy for Palestinians whatsoever. According to this narrative, even families protesting peacefully at the Gaza the border is termed as a “state of war”, as the Israeli army declared in a recent statement.

Commenting on the Israeli killing of scores and wounding of hundreds in Gaza, Secretary of State Mike Pompeo repeated a familiar mantra while on a visit to the region: “We do believe the Israelis have a right to defend themselves.”

Thus, Palestinians are now trapped — West Bankers are under occupation, surrounded by walls, checkpoints and Jewish settlements, while Gazans are under a hermetic siege that has lasted a decade. Yet, despite this painful reality, Fatah and Hamas seem to have their focus and priorities elsewhere.

Since the establishment of the Palestinian Authority in 1994, following the signing of the Oslo Peace Accords, Fatah dominated Palestinian politics, marginalized its rivals and cracked down on any opposition. While it operated under the Israeli military occupation in the West Bank, it still thrived financially as billions of dollars of aid money poured in.

More, the PA has used its financial leverage to maintain its control over Palestinians, thus compounding the oppressive Israeli occupation and various forms of military control.

Since then, money has corrupted the Palestinian cause. “Donors’ money”, billions of dollars received by the PA in Ramallah, has turned a revolution and a national liberation project into a massive financial racket with many benefactors and beneficiaries. Most Palestinians, however, remain poor. Unemployment today is skyrocketing.

Throughout his conflict with Hamas, Abbas never hesitated to collectively punish Palestinians to score political points. Starting last year, he took a series of punitive financial measures against Gaza, including the suspicious PA payments to Israel for electricity supplies to Gaza, while cutting off salaries to tens of thousands of Gaza’s employees who had continued to receive their paychecks from the West Bank authority.

This tragic political theater has been taking place for more than 10 years without the parties finding common ground to move beyond their scuffles.

Various attempts at reconciliations were thwarted, if not by the parties themselves, then by external factors. The last of such agreements was signed in Cairo last October. Although initially promising, the agreement soon faltered.

Last March, an apparent assassination attempt to kill PA Prime Minister Rami Hamdallah had both parties accuse one another of responsibility. Hamas contends that the culprits are PA agents, bent on destroying the unity deal, while Abbas readily accused Hamas of trying to kill the head of his government.

Hamas is desperate for a lifeline to end the siege on Gaza and killing Hamdallah would have been political suicide. Much of Gaza’s infrastructure stands in ruins, thanks to successive Israeli wars that killed thousands. The tight siege is making it impossible for Gaza to be rebuilt or for the ailing infrastructure to be repaired.

Even as tens of thousands of Palestinians protested at the Gaza border, both Fatah and Hamas offered their own narratives, trying to use the protests to underscore, or hype, their own popularity amongst Palestinians.

Frustrated by the attention the protests have provided Hamas, Fatah attempted to hold counter rallies in support of Abbas throughout the West Bank. The outcome was predictably embarrassing as only small crowds of Fatah loyalists gathered.

Later, Abbas chaired a meeting of the defunct Palestinian National Council (PNC) in Ramallah to tout his supposed achievements in the Palestinian national struggle.

The PNC is considered the legislative body of the Palestine Liberation Organization (PLO). Like the PLO, it has been relegated for many years in favor of the Fatah-dominated PA. The PA leader handpicked new members to join the PNC, only to ensure the future of all political institutions conforms to his will.

In the backdrop of such dismaying reality, thousands more continue to flock to the Gaza border.

Palestinians, disenchanted with factional division, are laboring to create a new political space, independent from the whims of factions; because, for them, the real fight is that against Israeli occupation, for Palestinian freedom and nothing else.