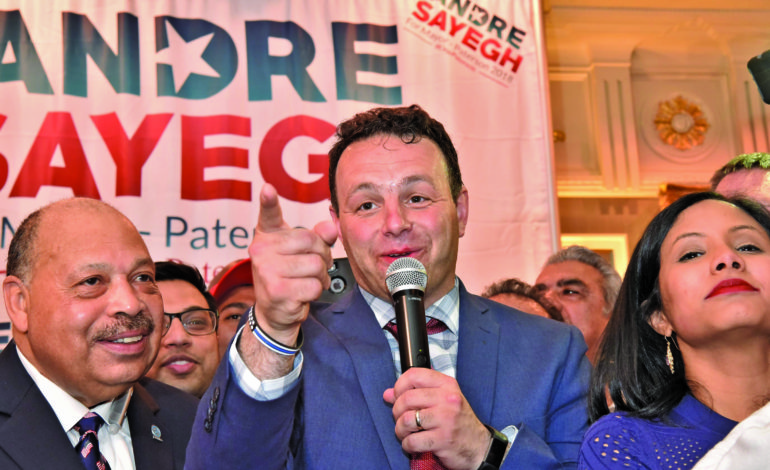 Using the theme “One Paterson”, Sayegh converted alliances he reached with community leaders from various ethnic groups into a coalition that overcame the cultural clashes that often fragment the city.

In a city mostly populated by Latinos and African Americans, Sayegh became Paterson’s first Arab mayor.  He acknowledged his different ethnicity amid the celebration.

“I don’t have to look like you to look out for you,” said Sayegh, who is Lebanese and Syrian.

Sayegh also capitalized on strong support from prominent Democratic leaders —including the party’s state chairman, John Currie — to trounce his rivals in an often bitter and contentious campaign.

“This victory was not about one person, it was about ‘One Paterson,’” a jubilant Sayegh said to supporters during his celebration at The Brownstone banquet hall, “and today ‘One Paterson’ spoke and they were heard loud and clear.”

Sayegh was praised for his ability to reach out to community leaders and bridge the ethnic divides and cultural disputes that have long plagued the city. Arabs have been residing in Paterson since the late 1800s, making it one of the oldest Arab American communities in the country.

Sayegh, a college history teacher who has represented Paterson’s Sixth Ward on the City Council since 2008, finished third in the 2010 mayoral election and second in the 2012 race. He prevailed despite attacks from opponents, who accused him of being beholden to political leaders and financial backers from outside Paterson.