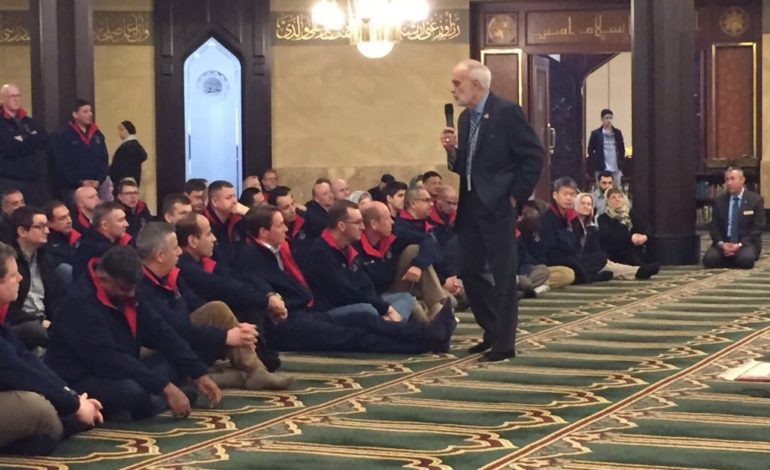 Eide Alawan, coordinator of the event speaks to the group of military officers during their visit to the Islamic Center of America on April 14.

“Many of the ICA’s congregants are Arab Americans who have fled war and poverty caused by Israeli aggression in their homeland.” – Suhail Bitar, whose relatives were slain during the 1996 Qana massacre

DEARBORN – It was clear it wasn’t going to be a regular Sunday prayer service at the Islamic Center of America (ICA), the nation’s largest mosque, on May 6.

The prayer hall was packed with a sea of hundreds of new and angry faces, many of whom chanted in agreement with several men who stood in front of the congregation with a microphone, who firmly demanded that the ICA be more transparent about its activities and to be held responsible for hosting officers from the Israeli military, among other counties, about a month ago.

The congregation was protesting a breakfast event organized by the ICA and sponsored by the State Department that hosted members of the National Defense University, a Defense Department-funded organization that gives a group of military students from around the world an opportunity to tour the U.S. for a year to learn more about its neighborhoods and interfaith communities.

On April 14, the ICA hosted the military education institution for the 11th year. An Israeli Defense Forces officer was present, along with officers from Lebanon, Iraq, Saudi Arabia and other participating nations’ militaries.

Protest organizers called on ICA officials to publicly apologize and for the event organizers to step down from their positions, charging that the mosque’s leadership had always known that Israelis were among the military delegation ever since they participated in the program.

A smaller group of protesters tried to raise the issue two days before, during Friday prayers, but their microphone was cut off. Those in opposition were especially angered when they heard about one of the Israeli officers making disparaging remarks during the breakfast in 2013. Many said they’d heard that the officer boasted about the progress Muslims and Israelis have made, referencing that he used to kill Muslims in combat but is now sharing a meal with them.

At the microphone, Hassan Bazzoun, one of the protest organizers, alleged to the congregation that the ICA’s invitation of Israeli officers was “a failed, miscalculated, inappropriate and undignified effort” that was paid for by donations from the community to the ICA “in belligerent defiance of the community’s will.”

“We…absolutely reject that our house of worship be dishonored and contaminated by such actions,” he said, continuing to put forward a list of demands that included an immediate apology, a pledge from the ICA’s board that the event will not be held again and that its organizer step down.

He also demanded that the ICA publish an apology by Wednesday, May 9. The large congregation loudly cheered in unison.

As of press time, no such apology has been issued.

Suhail Bitar, a board member of the Islamic Council of America, a mosque just a few blocks from the ICA, told The AANews that the protest is about more than military officers being hosted at an Islamic center; it’s about the ICA attempting to normalize relations between the Arab American and Israeli communities.

Bitar added that many of the ICA’s congregants are Arab Americans who have fled war and poverty caused by Israeli aggression in their homeland and are hyper sensitive about forging alliances with Israelis. His cousin’s children were killed in the 1996 Qana massacre and that three of his family’s homes were destroyed in the 2006 Lebanese-Israeli war, he said.

“We need an apology,” he said. “What happened is not acceptable. If [the ICA] does not do anything, there is going to be a movement.”

Ned Fawaz, a former ICA official who ended his post two years ago, told The AANews that although he agrees that Israeli military personnel should not have been hosted at the ICA, he defended the center’s attentiveness to the community’s concerns and criticized the protesters’ hasty conduct.

He said the ICA should apologize and not allow Israeli officers to participate in the program in the future.

Fawaz said the ICA has always stood by victims of Israeli abuses, including championing Palestinian rights and sending about $1.5 million in medical aid to those affected by the 2006 war in south Lebanon.

He said that “people are twisting words” about what one Israeli officer had once told the group, adding that he was present and heard him talk at the podium about Islam being a peaceful religion and denounced ISIS for killing in the name of Islam.

He also attested that the event organizers had no knowledge of any of the delegates names and the countries they represent and called on concerned community members to participate in dialogue with the mosque, rather than demand the organizer step down.

“There was a wrong on both sides,” Fawaz said. “But this is a war no one will win – the protesters, the board, the ICA and Islam will lose.”

While the ICA did not make an apology, its board issued a statement the day after the initial Friday protest.

The ICA stood by its decision to host the military delegation, stating that the function is “consistent with our policy to engage with those seeking knowledge about our faith.”

It added that the mosque addressed the group of 76 top ranking student officers as a whole, without any apparent distinction regarding their individual countries of origin.

“We are dismayed that misinformation has circulated about the event,” the ICA said in a statement. “We will always account for the concerns of all who keep the center running and healthy and will act accordingly in the best interest of Islam and the community.” Kassem Allie, the ICA’s executive administrator, echoed the board’s sentiments about the mosque’s mission to educate others about Islam and the positive contributions Muslim Americans are making in their communities.

Allie told The AANews that the event, organized by the ICA’s Interfaith program and funded by community members who donated to ensure its continuation, is put on with “pure intent” and because of its “significant value.”

“We have a unique community and a unique situation where we are interested in expanding people’s views of American Muslims,” he said. “Who better to do that with than with people who may have some influence and some effect on the behavior of their organizations.”

He said ICA officials heard concerns about Israeli military participation, but that it was the mosque’s 28-member board of trustees who make the ultimate decision.

Although his and the board members’ political views may not align with any of the participants, political dialogue does not take place, Allie added. He stressed that all attendees wore the same jacket provided by the National Defense University and the ICA had no way of differentiating between them.

He added that it would be “unreasonable and insulting to say that the ICA could ask for a list of attendees to approve for any program.”

Allie also said that feelings surrounding the function has not been not monolithic and that many protesters have also objected the hosting of officers from the Saudi Arabian military, as it’s credited with a great deal of civilian deaths and exacerbating a humanitarian crisis in a war on Yemen.

Regarding the protesters’ demands of accountability, Allie said the ICA is already holding meetings with concerned community members and taking their input about how the program should be implemented in the future.

He criticized the protesters’ fire-branded approach and said some individuals with “ill intent” were “spreading misinformation and taking unfortunate actions.”

“Can any organization reply to ultimatums?” he asked. “It’s unfortunate that sometimes people take advantage of situations like this to further their unknown agendas”

Allie did not specify how the board would decide to move forward with event, but said it is reassessing the event and that it may or may not take place, or “could happen under different circumstances.”