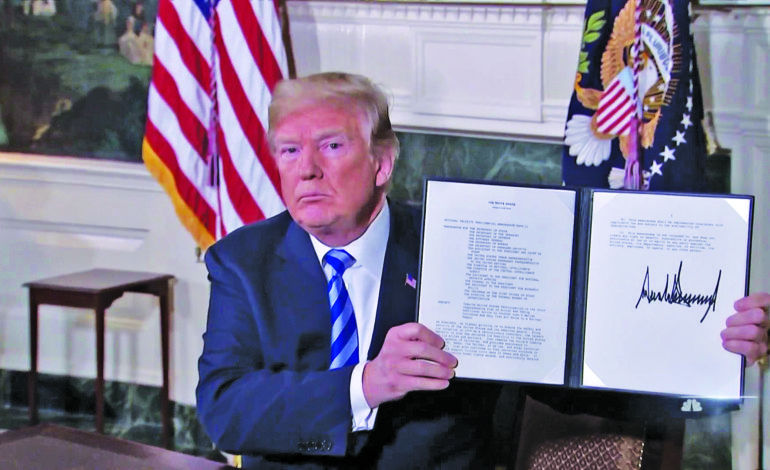 WASHINGTON, D.C. — President Trump pulled the United States out of an international nuclear deal with Iran on Tuesday, raising the risk of conflict in the Middle East, upsetting European allies and casting uncertainty over global oil supplies.

Trump’s decision is a snub to European allies such as France, Britain and Germany that are also part of the Iran deal and tried hard to convince the president to preserve it. The Europeans must now scramble to decide their own course of action with Tehran.

“We had an opportunity to make the Iran deal stronger and to make the United States and our allies safer,” Peters said. “Today, it appears the [Trump] administration, through lack of proper preparation and planning, has failed to capitalize on that opportunity.”

“As we await international responses to the U.S. withdrawal, there is no doubt in my mind that that the current administration has deliberately chosen to weaken our credibility and diplomacy in a way that will be difficult to repair,” Lawrence said. “As a member of Congress, I will continue to fight for the safety and diplomacy of our great country.”

“I believe that the decision to put the JCPOA at risk without any Iranian violation of the deal is a serious mistake… and why today’s announcement is so misguided.” – Former President Obama

Former President Obama said on Tuesday that President Trump’s decision to withdraw from the Iran nuclear deal, struck during Obama’s presidency, was “misguided.”

“I believe that the decision to put the JCPOA at risk without any Iranian violation of
the deal is a serious mistake,” Obama said in a statement, referring to the acronym for the agreement worked out by the United States, five other world powers and Iran.

Turkish President Tayyip Erdogan and his Russian counterpart Vladimir Putin agreed in a telephone call on Thursday that the United States had been wrong to withdraw from a big-power nuclear deal with Iran, a Turkish presidential source said.

United Nations Secretary-General Antonio Guterres called on the remaining parties to the Iran nuclear deal to abide by their commitments after President Trump said that Washington would withdraw.

Guterres said in a statement that he was “deeply concerned” by Trump’s decision. “It is essential that all concerns regarding the implementation of the plan be addressed through the mechanisms established in the JCPOA. Issues not directly related to the JCPOA should be addressed without prejudice to preserving the agreement and its accomplishments,” Guterres said.