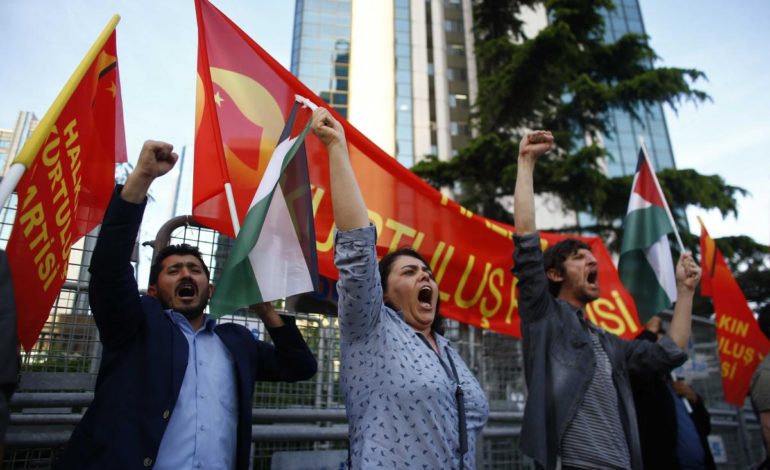 Pro-Palestinian demonstrators shout slogans during a protest against the U.S. embassy move to Jerusalem, near the Israeli consulate in Istanbul, Turkey May 15, 2018. REUTERS

ANKARA – Turkey and Israel expelled each other’s senior diplomats on Tuesday in a dispute over the killing by Israeli occupation forces of 60 unarmed Palestinians on Monday during protests on the Gaza border.

“The Israeli ambassador was told that our envoy to Israel was called back for consultations, and was informed that it would be appropriate for him to go back to his country for some time,” a Turkish Foreign Ministry source said.

Hours later Israel’s Foreign Ministry said the Turkish Consul-General in Jerusalem had been summoned and told to return to Turkey “for consultations for a period of time.”

The dispute appears to mark the worst diplomatic crisis between the two regional powers since Israeli forces stormed an aid ship to enforce a naval blockade of Gaza in 2010, killing 10 Turkish activists and prompting a downgrade in diplomatic ties that lasted until 2016.

Israel’s Prime Minister Benjamin Netanyahu said on Twitter Erdogan was in no position to “preach morality to us” because he supported the Palestinian Islamist movement Hamas which rules Gaza. “There is no doubt he well understands terrorism and slaughter,” Netanyahu tweeted.

Erdogan tweeted back that Netanyahu was the leader of “an apartheid state that has occupied a defenseless people’s lands for 60+ years in violation of U.N. resolutions”, adding that he was criticizing Turkey to deflect attention.

There have been demonstrations against Israel in Istanbul and in the capital Ankara. Erdogan, who is campaigning for presidential and parliamentary elections next month, said a rally will be held on Friday to protest the killings.

Turkish government spokesman Bekir Bozdag told parliament the rally “will once again show that the Turkish people will not remain silent in the face of injustice and cruelty, that they defend the victims in the face of the cruel”.