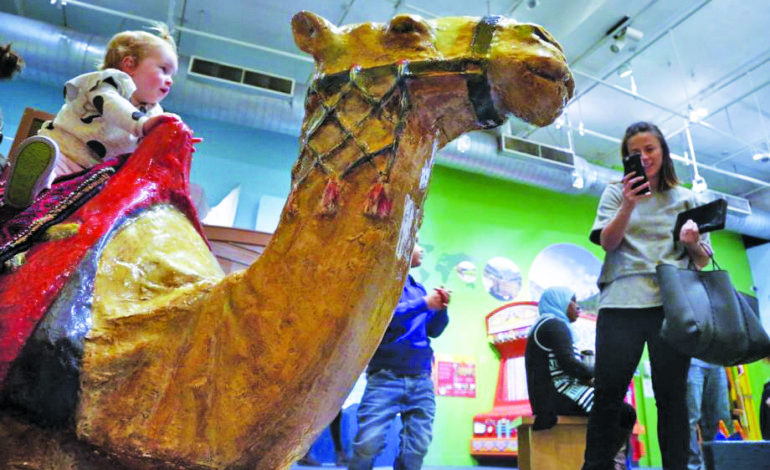 "America to Zanzibar: Muslim Cultures Near and Far" at the Children's Museum of Manhattan in New York. The exhibit just won $100,000 to continue to meet national demand with new tours through Illinois, Kentucky, Pennsylvania and Tennessee - Photo by AP

The Doris Duke Foundation for Islamic Art selected 15 grantees from a pool of 200 applicants, double from the previous year, when 98 organizations applied. Among the recipients is the University of Michigan-Dearborn’s Center for Arab American Studies, which was awarded $216,677.

NEW YORK — Fifteen U.S. organizations will receive a combined $2.3 million in funding to “strengthen relationships among Muslim and non-Muslim neighbors” through arts and cultural projects.

The Doris Duke Foundation for Islamic Art has been making these direct grants since 2014 under the name “Building Bridges”, Inside Philanthropy reports. (Previously, the foundation awarded grants through a “curatorial approach” or via a third party, Inside Philanthropy added.) The 15 organizations will receive grants from $50,000 to $300,000, according to the Associated Press.

“When our trust and connections to one another break down, we are all the poorer for it,” said Zeyba Rahman, senior program officer for the Building Bridges Program, in a release. “One of the most tested and reliable ways in which we can ignite cross-community understanding and dissipate fear is through storytelling. It can serve as the glue that binds us together by providing direct entry into one another’s inner worlds and become the basis for lasting relationships.”

Building Bridges selected 15 grantees from a pool of 200 applicants, double from the previous year, when 98 organizations applied, according to the foundation.

Other grantees are the Minneapolis-based Springboard for the Arts, which received $300,000 to continue its work with the People’s Center Clinics. The organization will launch a Creative Community Hub that “builds relationships between Somali and other East African immigrants” through pop-ups and long-term projects.

Another recipient is the University of Michigan-Dearborn’s Center for Arab American Studies, which was awarded $216,677 to expand “Halal Metropolis”, a “place-based exploration of how Muslim culture has enriched key public spaces in Detroit.”

“We are incredibly grateful for the Doris Duke Foundation’s commitment to support projects that build and strengthen relationship in our community,’” said CAAS Director Sally Howell. “Through ‘Halal Metropolis’, we plan to demonstrate the many ways in which Muslims are contributing to the economy and culture of the region, and especially the revitalization of Detroit.”

“Halal Metropolis” is a collaboration between Howell, photographer Razi Jafri and artist Osman Khan that will culminate in a 2019-2021 exhibition. The exhibition will focus on the streetscapes, sartorial displays, spoken word traditions, vernacular architecture, storefronts and other means through which Muslims communicate their presence to one another and to non-Muslims.

Dearborn, Michigan, has the largest Muslim American population by percentage in the U.S., where about 1 in 2 residents are Arab American or of Arab descent. It’s also been the target of fake news attacks by the radical right claiming that Sharia law has taken over the quiet suburb.

Chicago-based Silk Road Rising received $162,500 to partner with Muslim-American playwrights to create three new works. While the Cleveland Public Theatre was awarded $50,000 to launch a resident theatre company that will develop work by Arabic-speaking community members. The theatre already has a permanent Spanish-speaking ensemble, Teatro Publico de Cleveland, and hopes to replicate its success with Masrah Cleveland AlA’am.

The Building Bridges program is an effort to present and display redeeming images of American Muslims in the absence of fair and balanced treatments of Muslims in Hollywood and the mainstream media. Smaller art and theater projects can be the only places where Muslim-Americans can see themselves represented fairly. These smaller projects may also be White Americans’ only place to see Muslim Americans besides on shows like “Homeland”, with such roles as “Terrorist #4.”

“It’s really popular culture that impacts how people feel about one another,” Sue Obeidi told the New York Times regarding Muslim representation in Hollywood in general.

There are approximately 3.3 million Muslims living in America and anti-Muslim incidents have spiked since 2015, suggesting that political rhetoric can fuel the flames.

With the new Building Bridges grants, the foundation hopes to “creatively re-imagine ways to promote social cohesion in our communities,” Rahman said in the press release, “while celebrating the cultural contributions of Muslims to our American identity.”