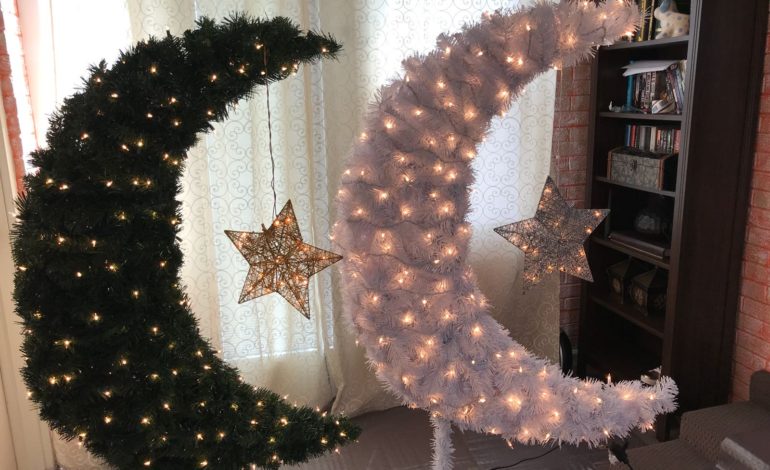 DEARBORN — Celebrating Ramadan in the U.S. doesn’t come as naturally as it does in Muslim-majority countries. From fasting during long summer days to lackluster holiday cheer and enduring anti-Muslim sentiments, Muslim Americans have to try just a little harder throughout Islam’s holiest month.

Samar Baydoun Bazzi, a 29-year-old Dearborn resident and nursing student, knows that all too well and is trying to change that— one Ramadan tree at a time. Samar Baydoun Bazzi standing next to one of her Ramadan Trees

Bazzi told The AANews she remembers feeling like the “odd one out” growing up as a Muslim in Michigan, especially after she began wearing the hijab. During Muslim holidays, she rarely would feel any enthusiasm as gatherings were mostly isolated to family and close friends. Her home would only light up with decorations during Christmas.

Although simple Ramadan-related decorations adorn some properties in Dearborn, Bazzi said she wants to bring a little extra Ramadan spirit to a city that’s home to one of the most concentrated Arab and Muslim American communities and one of the largest mosques in the nation.

“People can get more creative,” she said.

The project, now in its fourth year and selling nationwide, began when Bazzi’s daughter, 4-years-old at the time, thought it was Christmas when she put up a tree along with other banners and crafts, in preperation for Ramadan.

That same day, Bazzi said she took the tree apart and rearranged it in the shape of a crescent moon, a widely-recognized symbol in Islam.

“I wanted her to be excited about her own religion and holiday,” she said about her daughter.

Bazzi, who crafts the trees by hand in her basement, said she quickly learned that many Muslim households face the same obstacles and people wished they’d had such trees in their childhoods.

“The parents want their kids to feel like their own holiday is the most amazing time of the year,” Bazzi said. “It’s a time when they’re supposed to be closer to God, to pray and fast; we want them to fall in the love with the whole process.”

Bazzi said her intention was not to blend Anglo-Christian and Pagan traditions with Islamic ones by using a Christmas tree and that she initially only used a tree because that’s what she had available.

“It really makes no difference to me,” she said. “It doesn’t look like a Christmas tree anymore.”

At a time when political tensions are high and bigoted rhetoric is rampant, Bazzi said her goal is to ensure Muslim Americans, especially the youth, can be unabashedly proud and more openly celebrate their faith.

It takes her about five hours to make each tree. The six-foot-and-eight-inch-tall trees are available in white and green and include lights and a hanging star. They’re being sold nationwide, with requests for them coming from around the world.

Bazzi said the Ramadan Trees have garnered enough interest for a wait list to fill up, forcing her to stop accepting orders this year.

She said she hopes to partner with a manufacturer and expand the project into a large-scale business. For inquiries,