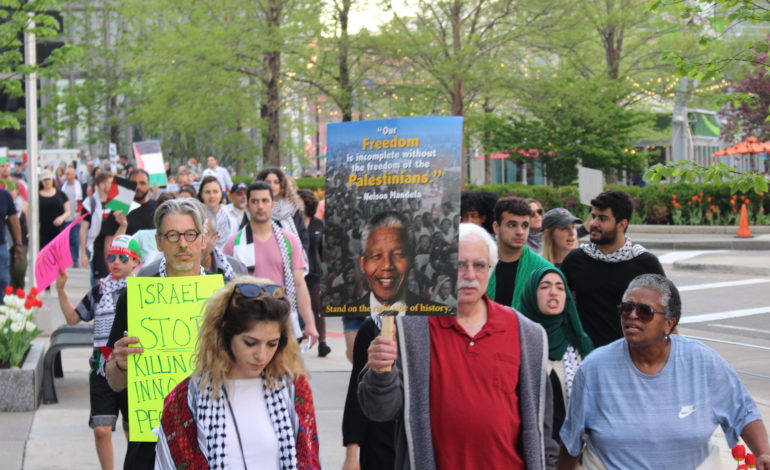 Protesters marching in downtown Detroit - Photos by The AANews

DETROIT – On the 70th anniversary of what is considered the greatest catastrophe in Palestine, drones painted the sky with trails of smoke grenades and snipers perched on the Israeli side of the Gaza border pelleted thousands who were protesting against those responsible for the historic tragedy – the Nakba, in Arabic.

More than 60 people demonstrating their “right to return” were killed and more than three thousand wounded, including some children, making May 14 the bloodiest massacre Israeli forces have committed against Palestinians, The New York Times reported.

A sharply contrasting event took place in Jerusalem. Top U.S. and Israeli officials — including Israeli Prime Minister Benjamin Netanyahu, Ivanka Trump and her husband, Jared Kushner, among other celebrities and business moguls — were at a grand opening party.

Kushner spoke of peace, but said that Palestinians “provoking violence are part of the problem and not part of the solution” and that the “journey to peace started with a strong America recognizing the truth.”

It seems they were among the few who celebrated the U.S. Embassy’s move from Tel Aviv to Jerusalem. The rest of the world — from the U.K. and European leaders, Arab League members, United Nations officials and people globally — are protesting the move. On Wednesday, prosecutors at the International Criminal Court opened a preliminary investigation into hostilities.

This time around, the U.S. Embassy’s move and Israel’s bloodbath has sparked harsher criticism and protests involving larger, louder and more diverse crowds.

That was especially apparent in Detroit, where demonstrators from varying walks of life marched from Hart Plaza and chanted slogans like “there is only one solution: Intifada revolution” and “from the river to the sea, Ahed Tamimi will be free.” A White Metro Detroiter who wished not to be named, said he went to protest President Trump’s “disgusting” decision, but is optimistic about the boycott, divestment and sanctions (BDS) movement against Israel because the move makes it clear that there was “never really an even-handed broker.”

He added he doesn’t see viability to a two-state solution and hopes Israelis and Palestinians can live in one state, in peace among each other.

Don Greenspan, a member of Jewish Voice for Peace, said that organization is beginning to attract more young Jewish people because many are realizing that Israel’s human rights abuses are inconsistent with Jewish values.

He added that Netanyahu’s administration has shifted so far to the right that it makes it easier for young Jews to question the United States’ unquestionable backing of Israel.

Greenspan urged others not to have a “blind spot” on the issue and criticized American media for their biased coverage of the conflict.

Julia Kassem, one of the demonstration’s organizers and a member of the U.S. Palestinian Community Network in Detroit (USPCN-Detroit), said she was there to protest the U.S. government’s actions against the consensus of the international community and the American people.

“Here in the United States, the belly of the beast, we are standing in support to resist the consensus to further erase their narratives that our tax dollars have assigned them to,” she said.

Yahya Hafez, member of the Palestinian Youth Movement, said the liberation of Palestinians depends heavily on the young in the homeland and diaspora to cultivate a sense of ownership and responsibility to keep the resistance going.

“We call on all of our youth in exile to spread their support through actions of their own and by speaking truth to power through as many mediums as possible,” he said. Mond Sankara, a member of the Workers World Party in Detroit, said the Palestinian flag reminds him of the Pan-African flag. The colors of red, green and black embody the same struggle for liberation and sovereignty.

Daad Katato, a Palestinian activist and doctor in health and environmental sciences, blamed the dwindling prospect for peace on the rift between the Hamas and Fatah Parties and on the apathy of the Palestinian Authority and the Palestinian Liberation Organization.

She also criticized Arab World leaders for not standing up to Trump’s embassy move and berated Saudi Arabia and Egypt for their complacency and continued blockade on Gaza.

“This is an Arab issue, not just a Palestinian issue,” she said.

When she asked friends and relatives in Gaza, Katato said most did not feel pressure from Hamas to protest at the border. “Instead, she said they were motivated by a suffering economy, lack of jobs and daily abuses from Israeli soldiers.

Katato’s grandparents fled Haifa during the first Nakba. She said they spoke of the importance of educating young Palestinians about their background so that one day they could return and re-inherit their land and start new generations.

George Khoury, a 76-year-old Palestinian refugee and organizer at USPCN-Detroit, told chilling stories of the gradual increase in severity of Israeli treatment and oppression of Palestinians since the occupation began.

He remembered being chastised by his father for bringing home a pack of cigarettes and pens he found on the street in Jaffa, as they turned out to be explosives. Khoury said he once brought home candy that was wrapped in cellophane and stuffed with sharp glass.

Khoury was 5-years-old, staying in a crowded condominium carpeted with bullet-holes, when the 1948 Nakba took place. He recalled witnessing families being separated and fathers being loaded onto a truck and taken to a nearby mosque where they were mass executed. His mother and his five siblings were driven about nine miles inland and eventually drove to the Birzeit village in the now-occupied West Bank.

Amer Zahr, a Palestinian activist and adjunct law professor at the University of Detroit Mercy, pressed the protesters to remain steadfast in their activism and not to heed news coverage that stigmatizes being Palestinian or a supporter of resistance against Israeli aggression.

“It is going to get harder,” Zahr said. “Our justice is coming; our anger is justified. They want to steal our falafel and hummus and Jerusalem because we have one of the most beautiful cultures on planet Earth; don’t be afraid to be who you are. They’re going to try to silence you; keep going.”

The question remains whether the rest of the world believes in the same “truth” as those celebrating behind the snipers on the hill.