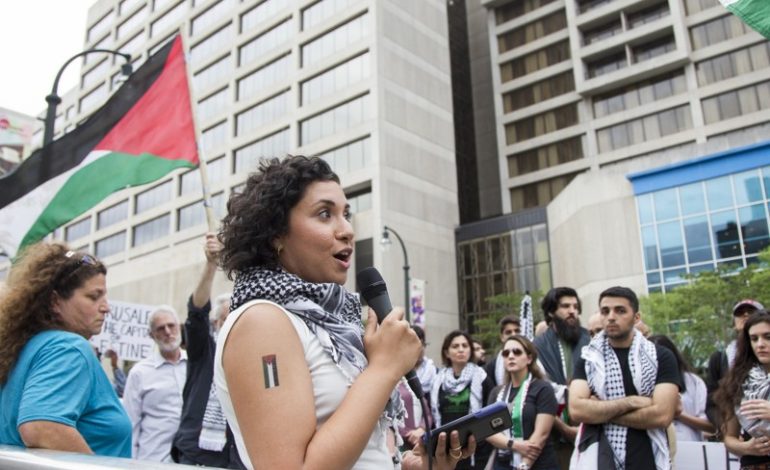 Rozina Gilani, a Jewish Voice for Peace organizer, speaks at the emergency protest for the violence in Gaza in Downtown Atlanta, Georgia, on Tuesday, May 15, 2018. (REANN HUBER/AJC)

“It’s important to recognize that we are here out of extreme heartbreak and outrage, but also to remember that this outrage is not just as a result of the recent killings in Gaza, but through the everyday experiences in Palestine.” – Rozina Gilani, a Jewish Voice for Peace organizer

ATLANTA — It began with the raising of large red, green and black flags which waved to the sound of booming chants: “From the river, to the sea, Palestine will be free!”

On the eve of the holy month of Ramadan, nearly 400 Georgia activists took to the streets in protest of the May 14 killings of Palestinians by Israeli occupation forces at the border of Gaza.

In the bloodiest day in Gaza since the 2014 Israeli assault on the crowded strip, Israelis killed at least 60 Palestinians and injured another 2,700. 8-month-old Laila Anwar Al-Ghandoor was the youngest Palestinian killed in the violent clashes on Monday.

In Atlanta Tuesday evening, hundreds of people from different races, religions and ethnicities swarmed the corner of Marietta Street and Centennial Olympic Park Drive, where they commenced the evening by shouting Palestinian chants and listening to speakers organized by CAIR Georgia, Black Lives Matter Atlanta, Jewish Voice for Peace-Atlanta and 10 other organizations.

“It’s important to recognize that we are here out of extreme heartbreak and outrage, but also to remember that this outrage is not just as a result of the recent killings in Gaza, but through the everyday experiences in Palestine,” said Rozina Gilani, a Jewish Voice for Peace organizer.

Tuesday’s emergency protest also landed on the Nakba or “the catastrophe.” May 15 marks the day when 750,000 Palestinians were driven away from their homes during the 1948 Arab-Israeli war.

Gilani read aloud letters from people in Gaza who wrote to Jewish Voice for Peace.

“Seventy years down the road, the young didn’t forget their original villages and they’re insisting to return back despite being failed by all. Despite being abandoned,” said one of the letters, sent by Youssef Al-Jamal from Gaza. Protestors take to the streets at the emergency protest for the violence in Gaza in Downtown Atlanta, Georgia, on Tuesday, May 15, 2018. (REANN HUBER/REANN.HUBER@AJC.COM) Photo: REANN HUBER

The recent surge in killings in the Palestinian occupied territory have also been fueled by President Trump’s decision to recognize Jerusalem as the capital of Israel and move the U.S. embassy there from Tel Aviv.

Jerusalem, home to Muslim, Christian and Jewish landmarks, is an integral part of the Palestinian identity. As a city holy to all three religions, the embassy move angered Palestinian activists and incited continuous protests.

Rev. Fahed Abu-Akel, a Palestinian Christian and the first Arab American elected to lead the Presbyterian Church USA, said that anyone who used God as a way to validate Israel’s occupation of Palestine did not believe in a real God.

“As a Presbyterian minister, I need to challenge people; Any Muslim, Jew, or Christian that uses the name of God to occupy, to kill and steal the land — I don’t think you have a living God.”

Ilise Cohen of Jewish Voice for Peace told the crowd the 70-year ongoing Nakba, 50-year occupation of Palestinian territory and 11-year siege on Gaza is “incomprehensible and unacceptable.”

Cohen, in tears, sang a song in Hebrew with her daughter about not lifting swords against other nations.

Protesters then marched in spirited unison around Centennial Park, each chant first being shouted into a megaphone and then repeated by the growing crowd. Bystanders took selfies with the protesters, and many of those driving by the march honked their horns in support.

The march ended where it started with a candlelight vigil. Names of the Palestinians who died Monday were read aloud, followed by a moment of silence.

“Today, we showed the world what it means to be Palestinian; to be hurt and broken, over and over, just to stand up and come together again, just as strong as before,” said Asma Ahmed, a Palestinian American who lives in Atlanta and participated in the emergency protest. “I owe the people here so much. The way we came together like the boundaries between us didn’t exist, it’s just incredible.”

Alaa Elassar is a writer for The Atlanta Journal-Constitution, where this article first appeared.