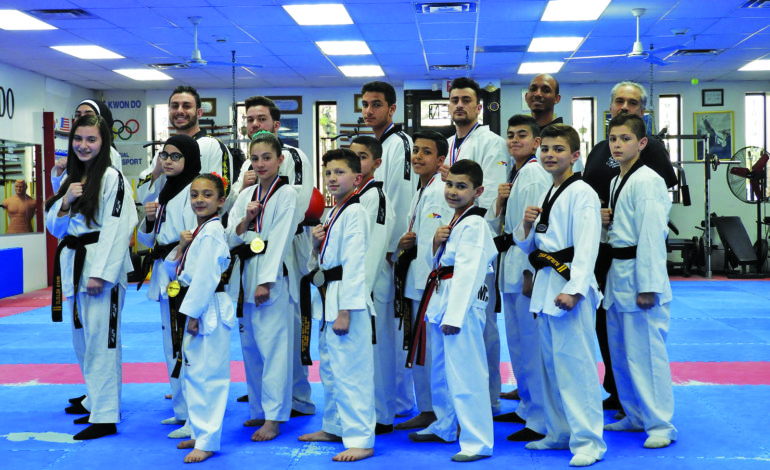 DEARBORN — Koubeissi Taekwondo School champions train faster and process techniques with more prosperity when training practices are varied and include a moral focus.

Taekwondo is a South Korean traditional martial arts sport that relies on combat philosophy, concentration, physical fitness and self-defense; it is the right way of using Tae and Kwon, “fists and feet.” Moreover, the sport also implies the ways of thinking and life, self-imposed discipline, and the transcendence of humanity and an ideal society.

“Master Ali Koubeissi not only trains us to be taekwondo competitors or athletes, but he trains us to be better human beings,” Master Hameed Dakroub, a fifth Dan black belt coach, said. “It relates it back to being a good human being, a good person in the community; and the fact that he teaches us to be those types of people is far more important than any taekwondo achievement.”

Koubeissi not only trains his student athletes as disciplined taekwondo fighters, he shapes them to become disciplined human beings as well. He uses martial arts to solve diverse problems and seeks the best for his students, for many of them have competed in and won medals in prestigious tournaments such as the Governor’s Cup, USAT Michigan State Taekwondo Championships and national championships.

“You have to be fit — not just physically fit, but mentally fit,” Youseph Hojeije said. “You have to mentally prepare yourself. You know when you’re going into a fight, you could be the best fighter and could have all these skills, but if you are not mentally fit and are afraid of your opponent, you will have to concentrate.”

Maya Hojeije, who has trained since she was 4, also admires the team bond; her brother Zayn benefits from the sport as it helps him defend himself.

“It (taekwondo) is satisfying for when you get older, and for self-defense as well,” Hojeije said.

Zeinab Koubeissi, a heavy black belt division gold medalist, stressed that although taekwondo is an individual sport, it is important that athletes train together and motivate each other, for they compete together in tournaments, including national championships.