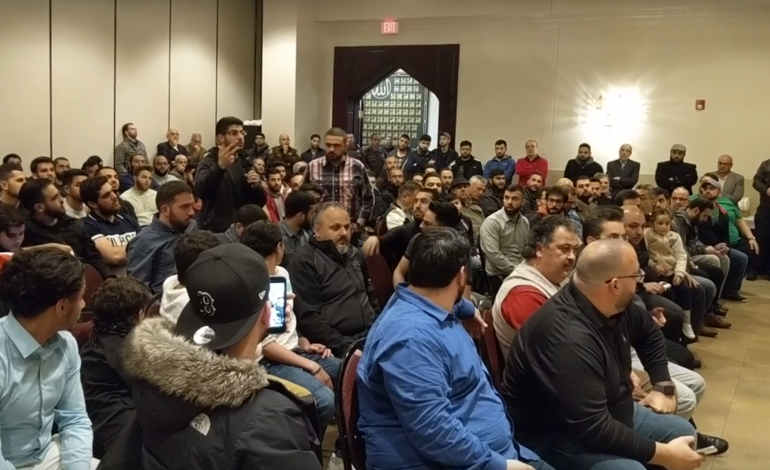 Protesters against Israeli military officers' gather at the ICA

DEARBORN — For the second week in a row, local Muslims protested the Islamic Center of America’s (ICA) hosting of Israeli officers last month, along with a group of military students from around the world.

Requested by the State Department and organized by the mosque’s interfaith organization, the officers participated for the 11th year in a breakfast at the ICA on April 14 to learn more about Dearborn’s multifaith community. The program was part of the National Defense University’s year-long tour across the U.S. and is funded through the Defense Department. The ICA’s United Network of Islam paid for the event.

Dozens of protesters gathered at the ICA’s prayer room on May 4 and May 6, demanding that the mosque issue a clear apology, terminate the program and that officials responsible for the event step down.

They returned en masse on Saturday, May 12, more outraged and impassioned than before, to denounce ICA’s two statements, saying they were insincere and served to pacify demonstrators and the mosque’s congregation.

In the first statement, released the day after the first protest, the center stood by its commitment to educating all people about Islam, said it was “dismayed that misinformation has circulated about the event” and that it will “remain attuned” to the community’s concerns.

In the second statement, issued on May 12, the mosque stressed that it has been at the forefront of defending the cause against Israeli occupation since its inception five decades ago and that the ICA’s 28-member board of trustees “regretfully” had no prior knowledge that Israeli officers were present. It also stated the ICA never intended to host Israeli military personnel and would stop doing so in the future and called on the community to unite in the spirit of Ramadan. 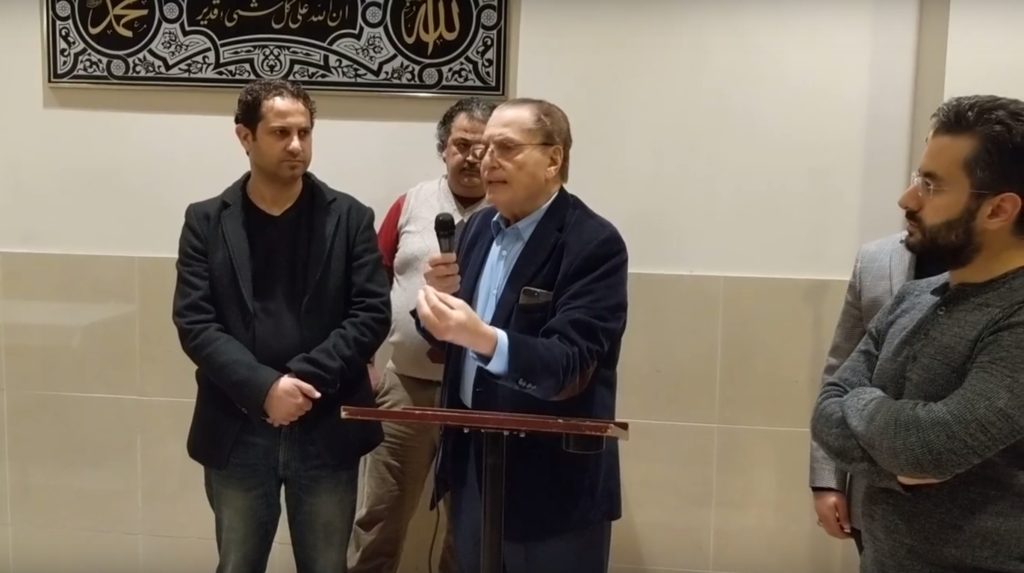 They gathered to ask more specific questions regarding the program and express their views without censorship, as one mosque official was noted for cutting a microphone feed and snatching phones away at previous demonstrations.

A large table was set up to seat the ICA’s board members, but none were present. Instead, Ned Fawaz, an emeritus board member and an advisor to the mosque, spoke and assured protestors that only one or two mosque officials knew about the Israeli officer’s visit and urged them to engage in dialogue, rather than hurl accusations.

“Who says you’re more patriotic than others?” Fawaz asked.

Dr. Saleh Al-Ameen, one of the protest organizers, was greeted with a thunderous cheer when he responded that the more patriotic are those who do not allow Israelis to enter a mosque.

Fawaz continued to stress that the board members had no knowledge of the presence of Israeli officers because they did not ask, nor could they differentiate one attendee from another, as they wore similar non-labeled jackets provided to them by the National Defense University.

He also reassured protestors that no Israeli military officer would enter the mosque, but that the ICA would continue to host military officials from around the world.

Hassan Bazzoun, another protest organizer, urged congregants to remain calm and present substantive concerns so a tangible solution could be reached.

Following a barrage of questions regarding the qualifications and processes of becoming board members, Fawaz proposed the idea of forming a committee of young locals that would represent their concerns to the board.

He said board members are professionals, including doctors and real estate agents, who have volunteered, donated and were involved in the day-to-day operations in programs of the ICA.

Fawaz also said the ICA is mandated to replace five board members every year.

“The board is willing to work with you,” he said.

A protester called for more transparency from the board and detailed guides on how the community can become more involved in the ICA’s decision making.

“We need something a little bit more explicit,” she said. “We shouldn’t have the committee be put together by the board members, because obviously we have this tension between us.”

Another female demonstrator addressed the crowd and urged them to increase efforts to eventually become the ICA’s administrators.

“This board will not help you with anything,” she said. “They’ve been welcoming Israelis for 11 years and did not know about it; then what do they know this mosque?”

One congregant, Tarek Bazzi, called on the ICA to cancel the program for good and spoke out against the ICA hosting any military officer—especially from Saudi Arabia and Qatar— for their complacency and hand in worsening the Palestinian-Israeli conflict and the war in Yemen.

“The majority of us here have a regular attendance at the mosque and all us are here,” Bazzi said regarding the issue of becoming a board member. “If all you have to do is show up, then why is this table empty?

“I don’t think the solution is going to come from working on an advisory committee subservient to people who don’t have a fundamental understanding of Islam enough that would give them the common sense enough to recognize…that every single drop of Muslim blood has throughout the world has the hands of Israel in it.”

Al-Ameen told the audience he had details that in the ICA’s second year of hosting the military delegation, Eide Alawan, director of center’s interfaith outreach office, which organized the program, had informed the board that Israeli officers were among the group.

He added that about three years ago, Ibrahim Kazerooni, the ICA’s spiritual leader at the time, knew that Israeli officers had visited the mosque and raised objections to the board at the time.

“Our demands are not absurd,” Al-Ameen said. “There is a community that felt that its dignity was compromised.”

He rejected mosque officials’ charges that the congregants are protesting with cynical agendas.

“We do not have any agenda,” he said. “We were more concerned about this center than any other institution in the community because it is of great value to us. This community is alive and young. Our new generation is not afraid and does not hide in corners; we are a generation that takes a stand.”