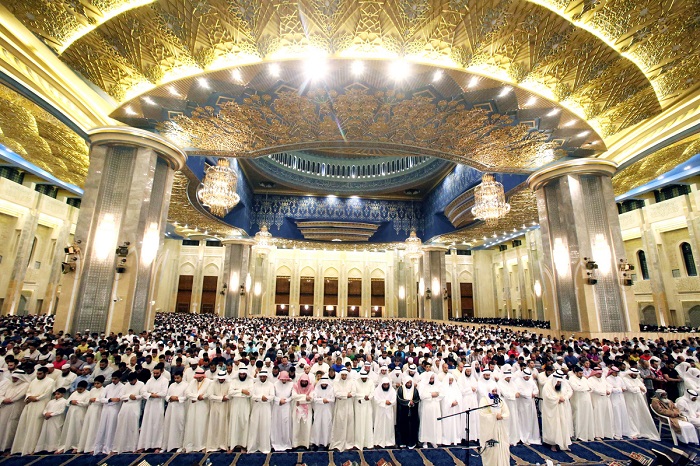 Inside the Grand Mosque in Kuwait - Photo by Kuwait Times

KUWAIT — With Islam being the country’s official religion, Kuwait’s traditions and religious affairs are intertwined, and that especially shows during the month of Ramadan.

Because Kuwait’s weather in the summer can go as high as 122 degrees Fahrenheit (50 Celsius), the country’s work and social schedules change during Ramadan.

Around the country, people in the public and the private sector work for fewer hours than on regular days, making the traffic lighter even during normal rush hours.

Hotels around the country offer lavish “iftar” (breakfast meal) and “suhoor” (final dinner meal before fasting) buffets in halls that are designed to look like tents with Ramadan themes.

It is hard to starve in Kuwait during Ramadan because around the country there are dozens of iftar tents set up by charity organizations and private businesses to provide meals for low income fasters.

Mosques around the country are also open to people of all ethnicities and backgrounds, often offering food and beverages at iftar and suhoor.

In terms of the Ramadan traditions, Kuwait has several that cater to adults and children on different occasions.

During the final days of the month of Shaaban, the month preceding Ramadan, Kuwait kicks off its first annual tradition called “Graish”, which is an Arabic word meaning “generosity.”

During Graish, organizations and social events host gatherings with light meals, often for breakfast, in order to welcome Ramadan. It has become a religious tradition followed by most Kuwaiti families and establishments.

Once Ramadan starts, before breaking the fast, the local television stations broadcast the iftar cannon in Kuwait City, around which families gather with their children as it’s fired to announce that it’s time to break the fast. This is one of the main traditions that Kuwait has followed since earlier times.

Another annual Ramadan occasion long awaited by children and families alike is Gergia’an. This is the Kuwaiti equivalent of Halloween, where children dress up in Kuwaiti traditional costumes and are accompanied by their parents to give away and collect candy.

Ghabqa is another annual Ramadan event hosted by companies and organizations in which attendees dress in traditional Kuwaiti attire and enjoy a night filled with giveaways and games with prizes.

There is a different feel to Ramadan in Kuwait because people stay out late and there is always a traditional event around the corner.

People are required to fast, however; it is punishable by law to be seen eating in public. This becomes problematic for non-Muslim expats. However, although restaurants are not allowed to serve clients during the fasting hours, some of them still prepare and deliver meals during the day.