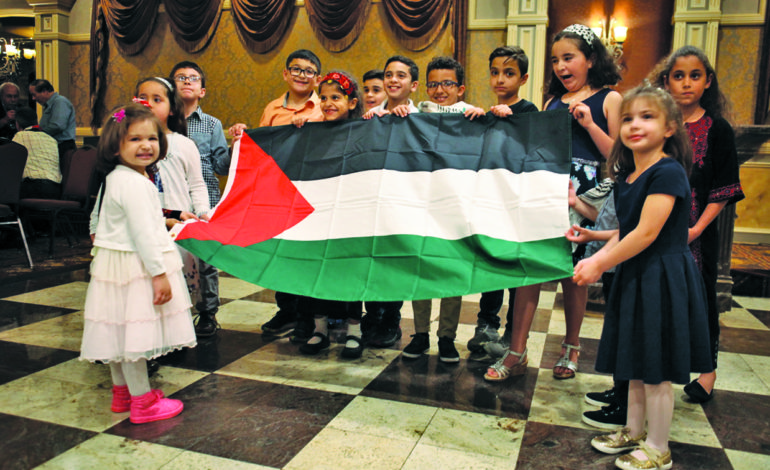 DEARBORN — A new nonprofit organization called New Generation for Palestine (NGP) held its first community-wide event Thursday, May 10, at Byblos Banquet Hall in Dearborn. The “Nakba Commemoration Dinner” attracted more than 300 guests, mostly Palestinian Americans. May 15 marked the 70th anniversary of the Nakba, the catastrophic events of 1948 that resulted in the dispossession of 750,000 indigenous Palestinians and the destruction of more than 500 ancestral villages.

NGP was formed in March as a 501(c)3 membership-based nonprofit, after community activists held a number of public meetings to iron out the organization’s structure and bylaws. At the initial meeting, local activist, comedian and law professor Amer Zahr was elected as NGP’s inaugural president.

“Our mission is to create a network of Palestinian Americans to bond with and empower each other, to promote and celebrate Palestinian Arab culture, to preserve and disseminate Palestinian narratives, to educate the public about Palestinian history and heritage and to articulate and advocate for a peaceful and just future in our homeland Palestine,” Zahr said. The event last Thursday commenced with “Mawtini”, the Palestinian national anthem. The audience sang along as a number of Arab American children held the Palestinian flag. The official program was kicked off by the night’s master of ceremonies, local activist and poet Tariq Luthun. Luthun, who is also NGP’s vice president, delivered an original poem about Palestinian identity.

The night then turned to a celebration of culture. The “Mawtini Dabkeh Troupe”, led and founded by Mahmoud Abuqalbain, also a NGP board member, delivered an energetic rendition of a Palestinian cultural dance, or “dabkeh.”

NGP’s secretary, local businesswoman Maram Alaiwat, followed up with a short update of NGP’s activities and progress in the first couple months of formation. She outlined how the group was able, against the odds, to bring so many people together in such a short time after formation.

Before introducing the evening’s keynote speaker, Zahr delivered a short speech, peppered with a few jokes about the Palestinian community and Palestinian identity. He noted that this was the first event in some time that included community members of all stripes.

“As I look around the room, I see Palestinians from all religions, all villages and all professions,” he said. “This is who we are as a community, diverse and beautiful.” The event was headlined by an uplifting address by Palestinian academic and historian May Seikaly, who emphasized the importance of keeping Palestinian narratives alive. She recounted some of her important work in preserving the voices of the Nakba for decades. Seikaly, who is also a professor of history at Wayne State University, has written extensively on the Nakba and the resulting Palestinian experience of dispersal. She has also interviewed and recorded the testimonies of many hundreds of Palestinian survivors of the 1948 exodus. Her most noteworthy work is her 2002 book, “Haifa: Transformation of an Arab Society 1918-1939.”

In her remarks, Seikaly urged the younger generation of Palestinian Americans to continue her work in ensuring that the story of the Palestinians remain alive and true. At the conclusion of her remarks, she received a standing ovation for her inspiring remarks.

A number of elected officials and candidates attended the event, including Rashida Tlaib, a former state representative and current candidate for U.S. Congress. Tlaib, who is of Palestinian descent, also delivered a short address to the audience about her own history, highlighted by stories about her grandfather’s fight against Israeli occupation and her grandmother’s insistence to her to always remember her Palestinian heritage.