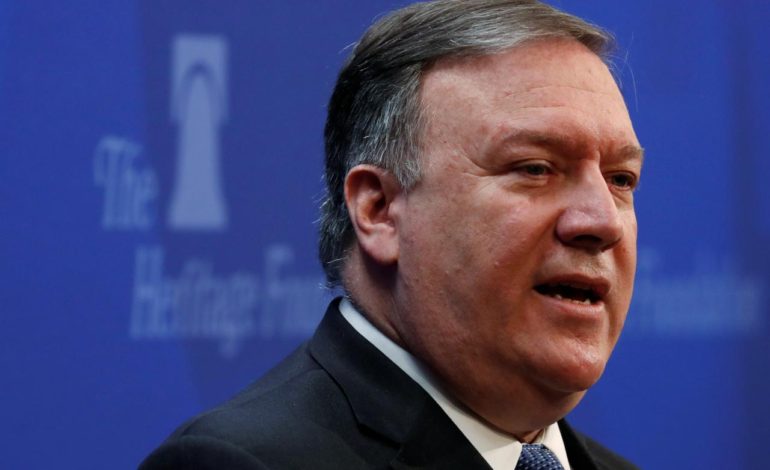 Secretary of State Mike Pompeo delivers remarks on the Trump administration's Iran policy at the Heritage Foundation in Washington, D.C., May 21 - Reuters

WASHINGTON/ANKARA — The United States on Monday demanded Iran make sweeping changes — from dropping its nuclear program to pulling out of the Syrian civil war — or face severe economic sanctions as the Trump administration hardened its approach to Tehran.

Weeks after President Trump pulled out of an international nuclear deal with Iran, his administration threatened to impose “the strongest sanctions in history,” and vowed to “crush” Iranian operatives abroad, setting Washington and Tehran further on a course of confrontation.

Secretary of State Mike Pompeo demanded sweeping changes that would force Iran effectively to reverse the recent spread of its military and political influence through the Middle East to the shores of the Mediterranean Sea.

“The sting of sanctions will only grow more painful if the regime does not change course from the unacceptable and unproductive path it has chosen for itself and the people of Iran,” Pompeo said in his first major speech since becoming secretary of state.

“These will be the strongest sanctions in history by the time we are done,” he added.

Pompeo took aim at Iran’s policy of expansion in the Middle East through support for armed groups in countries such as Syria, Lebanon and Yemen.

He warned that the United States would “crush” Iranian operatives and proxies abroad and told Tehran to pull out forces under its command from the Syrian civil war where they have helped President Bashar al-Assad gain the upper hand.

“Who are you to decide for Iran and the world?,” the semi-official ILNA news agency quoted Hassan Rouhani as saying.

“The world today does not accept America to decide for the world, as countries are independent … that era is over … We will continue our path with the support of our nation.”

Tension between the two countries has grown notably since Trump this month withdrew from the 2015 nuclear agreement aimed at preventing Tehran from obtaining a nuclear weapon.

A senior Iranian official said Pompeo’s remarks showed that the United States was pushing for “regime change,” a charged phrase often associated with the U.S. invasion of Iraq in 2003 and the overthrow of President Saddam Hussein.

Pompeo warned that if Iran fully resumed its nuclear program Washington would be ready to respond and said the administration would hold companies doing prohibited business in Iran to account.

“Our demands on Iran are not unreasonable: give up your program,” Pompeo said, “Should they choose to go back, should they begin to enrich, we are fully prepared to respond to that as well,” he said, declining to elaborate.

Pompeo said Washington would work with the Defense Department and allies, including Arab Gulf states and Israel, to counter Iran in the cyberspace and maritime areas.

The Pentagon said it would take all necessary steps to confront Iranian behavior in the region and was assessing whether that could include new actions or doubling down on current ones.

Pompeo said if Iran made major changes, the United States was prepared to ease sanctions, re-establish full diplomatic and commercial relations and support the country’s re-integration into the international economic system.

The speech did not explicitly call for regime change but Pompeo repeatedly urged the Iranian people not to put up with their leaders, specifically naming President Hassan Rouhani and Foreign Minister Mohammad Javad Zarif.

“At the end of the day the Iranian people will get to make a choice about their leadership,” Pompeo said.

“There is only one way to read it and that is that Trump administration has wedded itself to a regime-change strategy to Iran, one that is likely to alienate our allies. One with dubious prospects for success,” she said.

The administration’s approach “explicitly puts the onus on the Iranian people to change their leadership or face cataclysmic financial pressure,” said Maloney who has advised the State Department on Iran in the Bush administration between 2005-2007.

Lebanese analyst Ghaleb Kandil, who has close ties to the pro-Iran Hezbollah group, said Washington’s demands have previously not worked.

“These are conditions that were tested in previous phases of American pressures, before the nuclear deal, when Iran was in more difficult circumstances than it is in these days, and it did not surrender to these conditions or accept them,” said Kandil.

Pompeo outlined 12 U.S. demands for Iran including to stop uranium enrichment, never to pursue plutonium reprocessing and to close its heavy water reactor.

It also had to declare all previous military dimensions of its nuclear program and to permanently and verifiably abandon such work, he said.

Pompeo’s demand that Tehran stop uranium enrichment goes even further than the nuclear deal. Iran says its nuclear work has medical uses and will produce energy to meet domestic demand and complement its oil reserves.

European parties to the nuclear deal – France, Britain and Germany – are working to find a way to keep the nuclear pact in effect after Washington’s exit.

Pompeo said Washington would be open to a new treaty and wanted the support of America’s allies, not just in Europe.

“I know our allies in Europe may try to keep the old nuclear deal going with Tehran. That is their decision to make. They know where we stand,” he said.

Israeli Prime Minister Benjamin Netanyahu, who had urged Trump to pull out of the deal, praised the administration’s position on Monday.

“We believe this is the right policy. We believe it’s the only policy that can ultimately guarantee the security of the Middle East and peace in our region,” he said in Jerusalem.