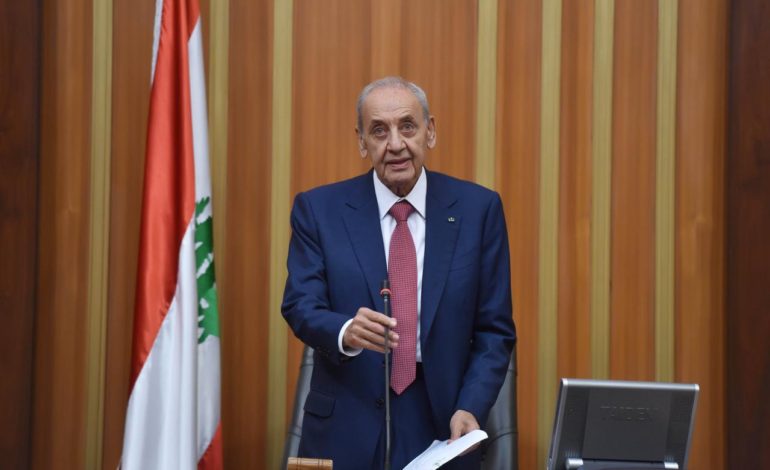 Nabih Berri, speaks after he was re-elected Lebanon's parliamentary speaker, as Lebanon's newly elected parliament convenes for the first time to elect a speaker and deputy speaker in Beirut, Lebanon May 23, 2018 - Lebanese Parliament

BEIRUT — Politician Nabih Berri, a close ally of the Hezbollah group, was re-elected for a sixth term as speaker of Lebanon’s parliament in an uncontested vote on Wednesday.

That prompted the interior minister to walk out of parliament in protest.

Berri said President Michel Aoun would begin consultations with lawmakers on Thursday to pick Lebanon’s next prime minister, likely to be the previous one, Saad al-Hariri.

Aoun is obliged to designate as prime minister the candidate with the broadest support among MPs.

Hezbollah, and groups and individuals that support its possession of arms, won at least 70 of parliament’s 128 seats in an election on May 6. The result was a reversal of Lebanon’s last national election in 2009, when anti-Hezbollah groups scored a majority.

Berri drew the votes of 98 of 128 MPs at the new parliament’s first session. After being reappointed as speaker, a role he has held since 1992, he called for a new government to be formed as soon as possible.

Lebanon is under pressure to do that to tackle a dire economic situation and unsustainable public debt levels.

Hariri, who headed the outgoing cabinet, faces tough negotiations to form a coalition government including all the main parties. He will lead a caretaker government until the new cabinet is agreed.Berri, 80, heads the Amal Movement and has been allied with Hezbollah since the end of Lebanon’s 1975-90 civil war.
Hariri, an opponent of Hezbollah, had declared support for the re-election of Berri as speaker.

Under Lebanon’s sectarian power-sharing system, the speaker must be a Shi’a Muslim, the deputy speaker a Greek Orthodox Christian, the prime minister a Sunni Muslim and the president a Maronite Christian.

Ferzli, like Berri and Hezbollah, has close ties to the Syrian government of President Bashar al-Assad. Hariri had declared his opposition to Ferzli’s candidacy.

The deputy speaker position has been held by a Hezbollah opponent since 2005, the year Syrian troops were forced to withdraw from Lebanon after the assassination of Rafik al-Hariri, Saad’s father.

Syria, which had a military presence in Lebanon from 1976, dominated the country from 1990 until it pulled its troops out.

Outgoing interior minister Nohad Machnouk, a member of Hariri’s Future Movement party, said he refused to take part in a parliament session “to restore one of the most important symbols of Syrian guardianship”.