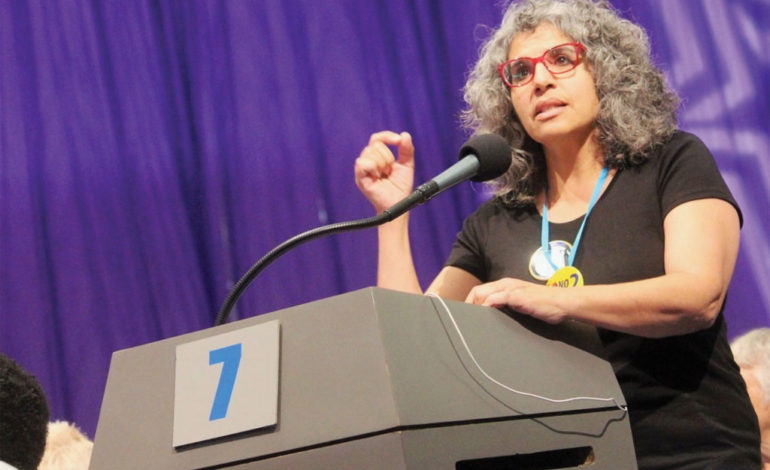 When she assumes the presidency of the MTA in July, Merrie Najimy will lead the largest union in New England. Photo courtesy of Merrie Najimy

BOSTON — Merrie Najimy, the president-elect of the Massachusetts Teachers Association (MTA), was inspired to become an educator and later a unionist after experiencing in her own youth that the curricula taught in the Massachusetts public schools she attended felt exclusionary to Arab American students. Growing up in the Lebanese community in Western Massachusetts, Najimy said she often felt isolated in school. She went on to start a Massachusetts chapter of the American-Arab Anti-Discrimination Committee (ADC), where she served as president from 2001 to 2009. She was also teaching at this time and became involved in the Concord Teachers Association, serving as president from 2006 to 2017. She then ran for president of the MTA alongside her running mate for vice president, Max Page, and will fill that seat in July.

Najimy told the Bay State Banner in an interview published last week of how she became involved in the teacher’s union.

“I got involved in my local and in the MTA in the early 2000s,” she said, “and at the time, both were making concessions. At the local, the concessions impacted the hard-earned benefits that we had won 30 years before; and at the state level, the concessions that the president prior to current President Barbara Madeloni was making compromised our rights as educators and our students’ learning conditions.”

She said that she started as a building representative in her local, and in 2006 she became the president. Then she ran for a board seat on the MTA around 2011 and won two terms.

“I came to see that the union is the vehicle through which members deepen our relationships with each other, our parents and our communities,” she said. “And where we develop our vision of public education and our vision for our community. Then together we organize to achieve those visions.”

Najimy recounted her story growing up as an Arab American in Western Massachusetts and how this shaped her political views. She said that experience is likely a similar to growing up Arab American anywhere else.

“Those experiences shaped both my views on education and my political views,” she said.

Najimy said that Arabs, for more than 100 years, have been portrayed in Hollywood and by the news media through the lens of Islamophobia. The only somewhat positive image of Arab Americans that Najimy had seen as a child was “I Dream of Jeannie”; and Jeannie was a white, objectified woman.

She grew up in Pittsfield in a very large Lebanese American community, where she got her affirmation from her family and community. But still, as an Arab American child in school she felt alienated by the Dick and Jane reader.

“I remember scribbling on it because I was angry,” she said. “Neither that reader nor the curriculum reflected my identity or culture.”

That’s why Najimy got into education, she said — to bring a broader world view to students.

“I went through school in the ’80s, when the multicultural education movement was well on its way,” she said. “So I was schooled with a pedagogy rooted in racial justice anti-bias, which today is coming back in the form of cultural proficiency or cultural responsiveness. For the 28 years I have been teaching, I have been writing my own anti-racist multicultural curriculum and implementing it, as well as giving workshops to educators.”

“I opened a chapter of the ADC Massachusetts, a civil rights organization based in Washington,” she said. “After Sept. 11, I was still teaching, but I did activist work through the ADC in my spare time. The chapter organized the community to respond to hate crimes and to fight against new draconian legislation that was rooted in racial profiling. So, these experiences helped me understand the intersectionality of issues of people from all different racial and ethnic backgrounds.”

-Read the entire interview at: www.baystatebanner.com