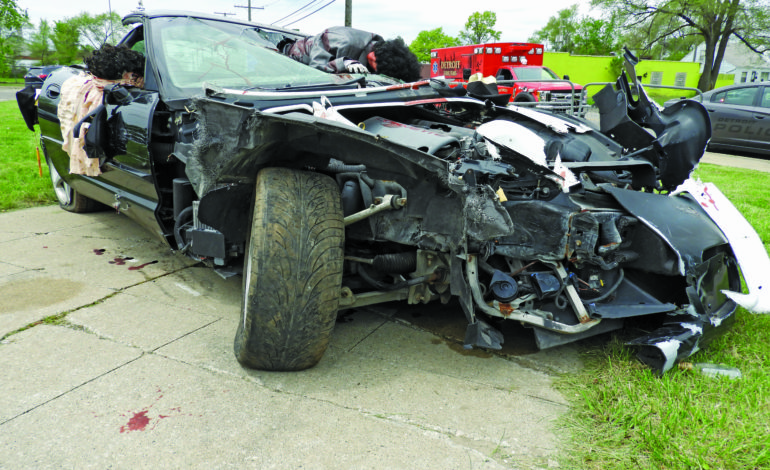 DETROIT — Officers at the Detroit Police Department’s 11th Precinct stressed the importance of youth substance abuse during a May 21 alcohol and drug awareness information session.

While it is distasteful to acknowledge such a repugnant truth, the underlying spheres of alcohol and drug abuse are staples in many communities; drug overdoses are killing more Americans under the age of 50 more than any other cause, for they are also responsible for many catastrophic vehicle accidents. Consequently, driving while intoxicated is the crime of driving a motor vehicle under the influence of either alcohol or drugs.

“This week in the state of Michigan, a trooper, a Detroit police officer or a deputy sheriff will respond to a crash looking just like this (disastrous and violent) with those two kids inside that will not make it to graduation,” said MSP First Lieutenant Michael Shaw. “Moms and dads will be crying at their [kids’] funeral instead of going to their graduation.”

According to the DEA National Take Back, the non-medical use of prescription drugs ranks second only to marijuana as the most common drug abuse in America. Moreover, the misuse of over the counter drug (OCD) medications is rapidly growing; OCD drug abuse is very common among today’s youth and it is paramount to put an end to it. The long-lasting silence of this detrimental topic still lies within those aspects and individuals who are not reaching out.

“I challenge you all today,” said Antoinette James, a crimes victim services advocate. “When you leave here today, challenge the community. Challenge the students. Not only challenge,  but have conversations about the dangers of drinking and driving.”