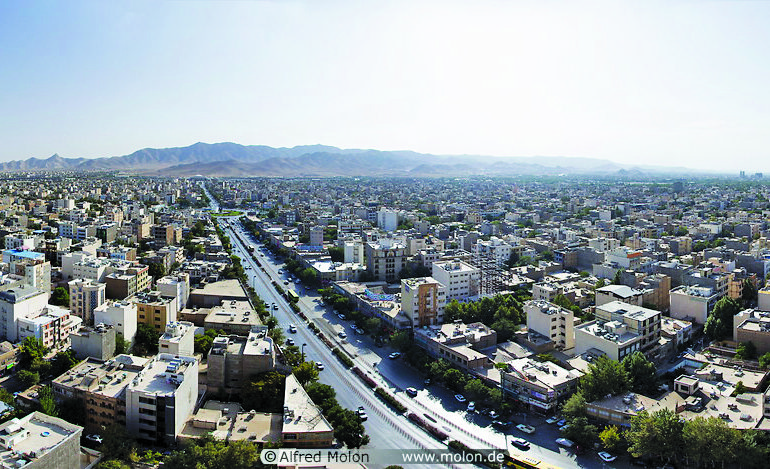 Iran is a dangerous place these days, at least in a car. Traffic in the cities here moves like Tetris, with drivers pushing their cars into any open space that will fit. Trips begin in chaos and play out in confusion. How it ends is always up to God’s will, everyone says.

I went to Iran this month to attend a conference on the Palestinians, Jerusalem and the greater Middle East, sponsored by an Iran-based nongovernment organization. On the sidelines of the meeting, I met with students at Mashhad University, Ferdowsi University and at a woman’s educational institute, as well as with visiting scholars from Tehran.

Just before my trip, the United States withdrew from the nuclear accord and while I was in the northeastern city of Mashhad, officially moved the embassy in Israel to Jerusalem. These events were tracked in Iran as closely as World Cup scores, though absent celebration.

It was not hard to learn students’ opinions.

“What does America want from us? To force us to negotiate? We did, we agreed, already, in 2015,” said one student in a reference to the year to nuclear agreement was signed.

“Regime change — do Americans even know we vote for our government here?” said another.

In answer to my query about Iranians having indeed overthrown one government 40 years ago, a grad student responded, “The Shah we overthrew, yes, but he was not selected by the Iranians, you installed him. Trump and Bolton [the names of the president and his national security adviser are almost always mentioned in one slur of mispronunciation] want us to change our government? And why do they think we will, because you make it harder for us to purchase Western goods?”

Two American Studies students likely headed to government jobs collectively translated a local idiom into “Who can sail an ark on such waters?” when asked if perhaps smarter, more targeted sanctions might move Iran to negotiate a new accord.

“Who would we send to talk?” one asked. “The hardliners? Trump just told them they were right in 2015 when they said not to trust America.” Iranians have reasonable access to information. Web tools such as VPNs get around government blocks. Instagram and Facebook are popular. Reuters.com was available openly at my hotel. You can watch the latest superhero movies on smuggled Blu-Ray. The ban on the popular social media app Telegram is seen as just an inconvenience to make “old people”, perhaps a euphemism for the hardliners, feel better. But there is an absence of counter-balancing physical presence to the rhetoric, theirs from New York and ours from places like Mashhad.

So despite the facts, conclusions are often amiss. The opening of cinemas in Saudi Arabia is the West using culture to attack morals — “Hollywoodism.” Israeli soldiers are said to broadcast pornography into Muslim homes, and a well-known Western media magnate is believed to be secretly creating child sex movies in Farsi. Israel drives American foreign policy; the Iranian dissident group dedicated to regime change, MEK, is behind every bush (John Bolton again). America demands a unipolar world which excludes Iran. And it is no coincidence American decisions favoring Israel were pushed into Muslim faces at the start of the holy month of Ramadan.

There is little sense of the powerful role U.S. domestic politics played in moving the American embassy to Jerusalem, faint awareness of the influence of the evangelical voting bloc. Instead, Washington’s actions are evidence of… everything. Iran is a nation under attack. Iranian efforts to reach out to the United States are slapped down, the time between reach and slap a measure only of the degree of duplicity. The students expressed an ongoing concern the United States wants to destroy them. That America has — since decades before they were born — wanted to destroy them.

These students are terribly familiar with the United States while also terrified of it. Too many sat with me in a quiet room at a university named after a famous ancient poet and worried other Americans will someday come kill them.

Outside, in Mashhad city, there were no demonstrations, no flag burnings; and when I visited the central mosque here after Friday prayers, more people were interested in a selfie with a foreigner than anything else.

But this is a religious city, home to the sacred shrine of the Eighth Imam, and from reception chats, to a speech at the conference, to a stem-winding sermon at the central mosque, the clerics were harsh. One looked me up and down like I was an unappealing meal before politely explaining the goal of burning the American flag is to “end the state.” On the wall behind him was a photo of the Statue of Liberty holding a Menorah, another showing Israeli leader Benjamin Netanyahu in jail. In a stirring speech, an important cleric stated the European Union is breakable by an Iran-China-Russia bloc. Zionist banks control the media. There is a dictatorship of the United Nations, Hollywood and the International Monetary Fund.

People from the Iranian foreign ministry spoke of a deep frustration over having no Americans to talk to, unsure why 40 years after the Revolution the United States still questions the legitimacy and stability of Iran’s complex democratic theocracy. The anger from Washington, one older diplomat said, was like a phantom itch that people who have lost limbs sometimes experience, left from some past, stuck in the present, an itch there is no way to make go away.

“Do you want this to all fail?” he asked, sweeping the room with his arm. “The Americans everywhere seem to have quit trying.”

Iran is an odd silk road. The air to me was a mix of honeysuckle, saffron and diesel exhaust. Aside from the ubiquitous American sodas, somehow immune from sanctions (ordered here by color — red for Coke, white for Sprite, orange for Fanta), there are few U.S. products to crowd out the Chinese names alongside LG, Peugeot, Samsung and Sony. Things are modern and extraordinarily clean, but at the same time worn; and when you look closely, patched and often repaired. The past, both 5,000 years ancient and in more recent images of the Revolution, is omnipresent in posters and murals.

It would be naive to think a place as complex as Iran could reveal itself in a short visit, but the people I encountered took that as their mission. They left me anxious, trying to calm the fears of aspirational people now seemingly cut off from aspiration, while bad actors in Washington and locally fill their gaps in understanding.

“Our future,” said one scholar, “is already forgotten.”

Outside Ferdowsi University several of the students piled into a taxi and drove into the mad, mad traffic. You see people off here in the hope everyone gets where they need to go, because driving is always slow and often dangerous. It’s God’s will, everyone says.

Peter Van Buren, a 24-year State Department veteran, is the author of “We Meant Well: How I Helped Lose the Battle for the Hearts and Minds of the Iraqi People” and “Hooper’s War: A Novel of WWII Japan.” @WeMeantWell