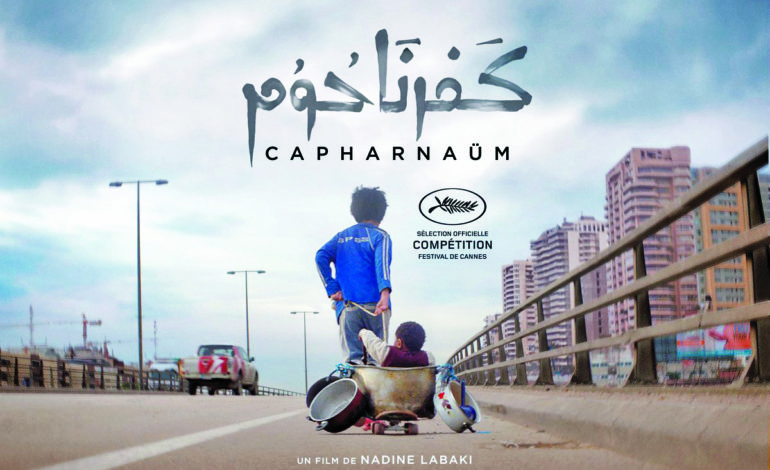 Lebanese director and actor Nadine Labaki with her husband, Khaled Mouzanar, and actor Zain al Rafeea after Labaki won the Jury Prize for Capharnaum' at the Cannes Film Festival, May 9 - AFP

CANNES — Nadine Labaki’s “Capharnum” earned a 15-minute standing ovation during its premiere at the 71st Cannes Film Festival. The film follows the story of a young boy named Zain, who is suing his parents for giving him life. Lebanese director and actor Nadine Labaki with her husband, Khaled Mouzanar, and actor Zain Al Rafeea, after receiving the Jury Prize for their movie at the Cannes Film Festival, May 9 – Photo by AFP

“There will never be a selection with positive discrimination,” Fremaux said.

His quote shows that the film festival circuit can only observe finished products. This predicament makes it difficult to highlight more women, as women traditionally aren’t given the abundance of filmmaking opportunities compared to male filmmakers.

The film is structured around Zain’s murder trial. Most of it is set in flashbacks to explain how Zain came to be in his current situation.

“Without papers people are totally excluded from the system,” Labaki said through a translator at the film’s press conference. “At the start of Capharnaüm, the themes were illegal immigrants, mistreated children, immigrant workers, the notion of borders and their absurdity, the fact that we need a piece of paper to prove our existence, which could be invalid if necessary, racism, fear of the other, indifference to the convention of children’s rights.”

The film features almost entirely non-professional actors, many of whom acted in their first roles.

Zain Al Rafeea, who plays the protagonist, was discovered on the streets of Lebanon like many of his fellow actors.

Labaki’s previous films include “Caramel” and “Where do we go now?” The latter is Lebanon’s highest grossing film to date; grossing more than $21 million.

The film will be coming to the United States and Latin America after Sony Pictures Classics purchased distribution rights in those areas.

Lebanese filmmaker Nadine Labaki became the first Arab woman to win a major prize at the Cannes Film Festival on Saturday.Her drama 'Capharnaum' was competing for the Palme d’Or, but won the Jury Prize. Watch Labaki recive a 15-minute standing ovation from the crowd. (Video taken by The AANews reporter at the festival).