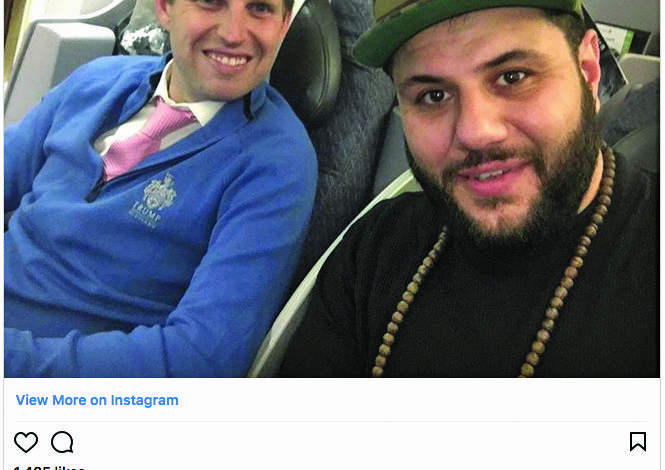 Mo Amer and Eric Trump on a flight

Amer made international headlines when he was upgraded to a first-class seat next to a certain member of the president’s family — the story of an Arab American Muslim comedian sitting and chatting with Eric Trump went viral.

Amer’s story doesn’t begin in the U.S., though. He was born in Kuwait to Palestinian parents.

“We moved to Houston because my brother was getting his Ph.D. in Houston,” Amer said. “It was just like, ‘What’s the best place to flee to? Well, let’s go to Houston.’”

Amer was introduced to comedy when he was 10-years-old and saw Bill Cosby perform at the Houston rodeo.

“He was co-headlining with the band Alabama,” Amer said. “That’s a hell of a pairing, right? My brother wanted to get my mind off of things. It was a really rough first year in Houston, so he just wanted to change the vibe, and he was like, ‘Let me take this kid to the rodeo.’ And he didn’t know he changed my whole life with that.”

After his father died, Amer had trouble in school. A teacher offered him a deal – Amer could do standup in class if he stopped skipping.

“And I did,” he said. “And that’s how I started in standup comedy. I started writing at home and she would let me do standup every Friday. And I stopped skipping. And she took me to the theater arts department, and I was doing talent shows.”

Because of his teacher at Alief Hastings High School, Amer was able to thrive.

“Mrs. Broderick, if you’re out there and you’re listening to this, please reach out to me,” he said.

Amer said his chance meeting with Eric Trump happened when he was upgraded to first class on a flight from Newark to Glasgow.

“There was a lady behind where I’m seated and I saw her first,” he said. “She was pissed. She was really angry and she was showing some middle fingers, and I was like, ‘Why is this woman so angry? This is first class. It’s amazing.’ And I looked over to the left and I was like, ‘My God, is that Eric Trump?’ And I took a second look and I saw his name on his sweater.”

Amer said he had an honest conversation with Trump.

“I looked at him and I was like, ‘Look, your dad got elected by doing one thing.’ He was like, ‘What?’ And I said, ‘Your dad was using a bunch of trigger words and inciting that out of people and this is the way he was able to dominate the airwaves.’ He didn’t flinch. He was like, ‘Yes.’”

He took a photo with Trump and posted it online

“I landed in Glasgow and my phone was going off like a cartoon,” he said. “This was like thousands of emails and notifications. Thousands and thousands. I didn’t know what to do, man. I panicked.”

Even after going super-viral, Amer said his comedy is influenced by his upbringing in Houston.

Amer will be filming his Netflix special at the Paramount Theater on June 28.

Jen Rice is a reporter for the Texas Standard.