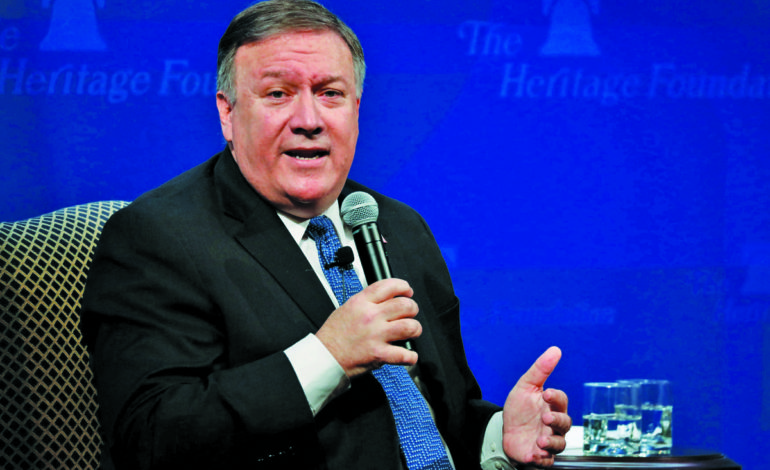 Pompeo speaking at the Heritage Foundation on Monday, May 21

It is now perfectly clear that this administration has no diplomatic track with Iran and is simply bent on regime change, which will only wreak havoc on regional and global peace and stability.

The scene at the Heritage Foundation on Monday could have come from the film “The Ugly American.”

Secretary of State Mike Pompeo devoted his first major foreign policy speech — since assuming the office from his more affable, and certainly wiser, predecessor Rex Tillerson — to pouring venom on Iran and, in essence, declaring economic war by promising to “crush” Iran’s economy by imposing the “strongest sanctions in history.”

Pompeo’s speech might be music to leaders in Tel Aviv and Riyadh, but for the rest of international community it is emblematic of a deeply detested U.S. administration that has a record of whimsically trashing international agreements without any qualms about damaging honor, credibility and global image through such arbitrary exercises of American power.

Frustrated by the tsunami of negative reactions worldwide to its decision to exit a verifiable international agreement that successfully curbed Iran’s nuclear program, the Trump administration has now upped the ante by growing its list of demands from four to 12.

Pompeo has provided a political smokescreen for an undiplomatic path toward war with Iran by piling up arbitrary demands that amount to yet another technical violation of the nuclear agreement (the Joint Comprehensive Plan of Action).

Pompeo, who has a long track record of both Islamophobia and Iranophobia, accused Iran of seeking to dominate the Middle East and promised a firm American response, together with its regional allies. It is now perfectly clear that this administration has no diplomatic track with Iran and is simply bent on regime change, which will only wreak havoc on regional and global peace and stability.

Indeed, Pompeo’s incendiary speech against Iran revealed the preliminary outlines of a war strategy beginning with the necessary preliminaries of conflict escalation and continuing through the usual means of economic warfare.

Behind Pompeo’s “12-point” demands from Iran is, perhaps, a hidden concern that the current Iran-Europe talks to save the JCPOA may actually yield positive results.

Thus, the White House has tripled the number of items on its Iran list to make sure that no compromise can be reached and the U.S. iron-fist approach toward Iran can proceed unimpeded.

Meanwhile, Europe is openly criticizing the U.S. for becoming “the gendarme of the world economy” — a new Rome that serves as the hegemonic center of a unipolar world order — and seeking to turn allies into “vassals” who slavishly follow Washington’s command.

Of course, since the world has evolved into a post-American-century multipolarism, it is futile for anyone in the U.S. contemplating a return of the status quo.

This is the major flaw in the administration’s hostile discourse on Iran: Promising what it cannot possibly deliver. If anything, Europe is openly and legally questioning the new round of U.S. sanctions, raising the distinct possibility that this attempt to resurrect the pre-JCPOA context of international and U.S.-led sanctions regime against Iran will fail.

Europe is now contemplating bypassing the U.S. dollar by making direct oil payments to Iran through its own currency, the Euro, in addition to providing government-financed trade with Iran and initiating Iran projects through the European Investment Bank.

Given these challenges to the Trump administration’s promised sanctions, why is the U.S. trying in vain to refocus European energy from cooperating with Iran to confronting the country?

The straightforward answer to the above question is that the U.S. is suffering from the delusions of a hegemonic power that can no longer impose its will on other nations yet refuses to acknowledge the new reality.

It has now manufactured another unnecessary, destructive, and imprudent crisis with Iran, which is bound to bring a future clash between U.S. and Iran to the detriment of world peace.

Kaveh L. Afrasiabi is a former adviser to Iran’s nuclear negotiation team and the author of several books on Iran’s foreign affairs.