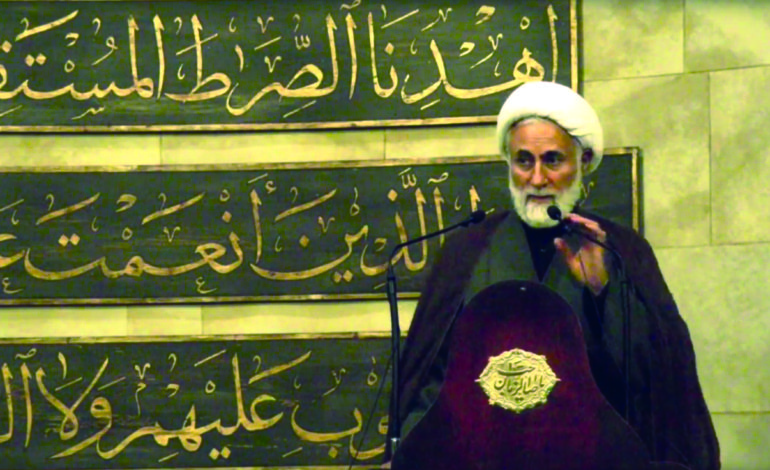 Controversies have plagued the Islamic Center since the passing of its founder, Imam Mohammad Jawad Chirri, in November 1994. Since then, several religious figures have come and gone after deep differences surfaced between the board and the successive imams.

This week, the Islamic Center of America’s board of trustees made three decisions in its recent meeting. The first was to elect a new chairman. Mike Fayz, a longtime real estate agent and trustee for two years, was elected to succeed outgoing longtime trustee Dr. Noureddine Saab.

The other two decisions made during the same meeting were the subject of discussions on social media: The firing of sheikh Ibrahim Yassine, one of the imams at the ICA, and the decision to rescind the latest statement the board supposedly issued in response to the controversy surrounding hosting a group of military officers from various countries— including an Israeli officer— in its 11th annual interfaith program of receiving such groups from the National Defense University.

The Islamic Center of America, dubbed the largest mosque in the United States, has been a magnet for visitors both locally and from around the nation.

Even though it wasn’t the first visit by an officer of the Israeli military occupation, it was the first time such a visit created a storm of community condemnation after it became public knowledge. Hundreds of concerned demonstrators gathered at the ICA on more than one occasion after the news broke out.

The demonstrators later put three demands before the board: First, admittance that such a visit occurred with the knowledge and consent of the board; second for the board to issue a clear and equivocal apology to the community that has suffered for decades from brutal Israeli occupation and third, to hold people who made the decision accountable in a transparent process.

The demands were received with mild responses by some ICA board members and belligerent ones by administrators, followed by a meaningless, empty statement that demonstrators perceived as an insult added to injury. As a result, the objections got louder and the crowd became larger and angrier. The board, after deliberation and while under pressure, issued a second statement and published it on the ICA’s official Facebook page in an effort to calm the mounting anger.

The protesters considered the second statement a half hearted admittance with no mention of the other demands, even though it carried a subliminal and ambiguous apology but no admittance or intention of accountability. However, the second statement was withdrawn after a local daily mainstream publication wrote a story about the controversy, quoting officials at the ICA saying that they’re still considering preventing Israeli military officers from visiting the mosque in the future.

Officials at the ICA told The Arab American News that the board rejected the second statement and therefore it has been rescinded. That has made many community members wonder who’s making the decision in one of the largest Muslim centers in the country.

Controversies have plagued the Islamic Center since the passing of its founder, Imam Mohammad Jawad Chirri, in November 1994. Since then, several religious figures have come and gone after deep differences surfaced between the board and the successive imams. The last clash of this kind happened three years ago and resulted in the departure of Sayed Hassan Qazouni after 18 years of service as the religious director of the ICA.

The dispute divided the area’s Muslim community between those who believe the religious director should be an employee of the ICA whose duty should be limited to religious affairs, while the board should run the business of the center; and those who argue that the religious leader should have the upper hand in running the ICA’s affairs.

This dispute is still brewing to no avail, disrupting the ICA’s operation and keeping congregants wondering what the future holds for this important institution.

The composition of a robust, effective board of trustees is another burning issue that has been surfacing in every crisis the ICA has faced in the last three decades.

Now, the 30-plus board members face another difficult challenge, including the board’s cohesiveness and effectiveness in light of the most recent developments. At least four trustees have recently expressed their dismay at the board’s malfunctioning. Some trustees have heard of the latest controversy through social media and from newspapers and are wondering who’s running the affairs of the institution.

The firing of Sheikh Ibrahim Yassine reopened the discussion of the imams’ unclear duties. The firing came after a Friday prayer sermon on May 18 that was considered divisive and outside his religious duty.

Yassine criticized Abdul El-Sayed, the only Arab and Muslim American Democratic gubernatorial hopeful, on the background of his commitment to the Democratic Party’s platform that supports the LGBT community, among an array of other issues. LGBT marriage has been legalized by the Supreme Court, a matter that Yassine brushed away by singling out the rising young star who happened to be a Muslim and an Arab, calling for boycott of his scheduled fundraising dinner at the ICA on Saturday, May 19.

It’s worth mentioning that high ranking Democratic officials have spoken at the nonprofit ICA in the past and that El-Sayed’s campaign had rented the hall; it would have been his fundraiser, not the ICA’s.

After a recording of Yassine’s infamous speech went viral on social media, El-Sayed’s campaign decided to suspend the fundraising and raise its concern to leaders in the community.

The decision to release Yassine from his duties added another element of discussion on social media, given the board’s deafening silence.

While the board may have a very good reason to discipline Yassine for such an out-of-bounds, divisive speech in singling out El-Sayed’s candidacy, it has a duty to follow the rules of relieving employees of their responsibility according to the rules governing the relationship between the employers and employees. Also, the board owes the community and the ICA’s congregation an explanation for its actions and should not let others define such actions based on rumors and innuendos— a habit that continues to keep this board and the institution the entire community cares about in hot water.

Three lingering questions remain: When the board members learn from their repeated downfalls; why did they withdraw their second statement about the visits of the Israeli military officers and will the board provide the community with honest and transparent answers to mend the strained relationship with the community at large and regain the trust of the congregation in particular?

These issues are becoming too large to shove under the rug.