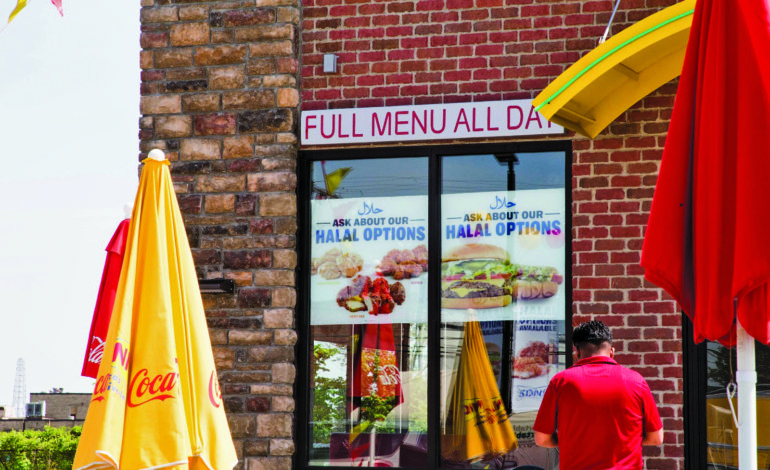 Franchise companies in Metro Detroit are tailoring their products and services to Muslim Americans' cultural and dietary needs, offering literature and posting signs in English and Arabic at libraries, providing Halal food and welcoming Ramadan practices - Photos by Imad Mohamad / The AANews

“When our trust and connections to one another break down, we are all the poorer for it. One of the most tested and reliable ways in which we can ignite cross-community understanding and dissipate fear is through storytelling.” –  Zeyba Rahman, senior program officer for Building Bridges

DEARBORN – Muslims have a storied and deeply-rooted history in Michigan, but unlike other communities that have altered the state’s cultural and economic landscape, their contributions have largely been overlooked.

In southeast Michigan, where a high concentration of Arab and Muslim Americans’ presence is evident, educators, artists and activists have teamed up to offer a unique way to foster understanding and dialogue between both Muslims and their non-Muslim neighbors.

Through the University of Michigan-Dearborn’s Center for Arab American Studies (CAAS), the team is curating “Halal Metropolis”, an artistic and discussion-based “exploration of how Muslim culture has enriched key public spaces in Detroit.”

“Halal Metropolis” is a collaboration between CAAS director Sally Howell, photographer and activist Razi Jafri and artist Osman Khan that will culminate in a traveling exhibition. The exhibition will focus on the streetscapes, sartorial displays, spoken word traditions, vernacular architecture, storefronts and other means through which Muslims communicate their presence to one another and to non-Muslims.

The CAAS was recently granted $216,677 from the Doris Duke Foundation for Islamic Art’s Building Bridges program to expand the project. It’s among 15 other national organizations that have been awarded a total of $2.3 million.

“When our trust and connections to one another break down, we are all the poorer for it,” said Zeyba Rahman, senior program officer for Building Bridges, in a statement. “One of the most tested and reliable ways in which we can ignite cross-community understanding and dissipate fear is through storytelling. It can serve as the glue that binds us together by providing direct entry into one another’s inner worlds and become the basis for lasting relationships.”

Howell, also a published author and an associate professor of history at the university, told The AANews the idea for the multi-media exhibit originated from the research she’s using to write her new book “Halal Metropolis: Mosques, Markets, and Neighborhood Development” and that she partnered with the artists to bring the local Muslim community’s narrative to life through photographs and artifacts.

The Doris Duke Foundation was interested in the project and offered to augment the work so that new art could be available to a larger audience, Howell said. Aside from art galleries in high-profile cities like Dearborn, Hamtramck, Ann Arbor and Detroit, the foundation plans to bring the art space to Metro Detroit communities where anti-Muslim sentiments are widespread, like in Macomb County.

Doris Duke was an American heiress and socialite who inherited wealth from her father’s tobacco business. She dedicated her life to collecting Islamic art and founded the Shangri La Museum, an Islamic-themed mansion in Honolulu.

Howell added that the grant makes it possible for the exhibit to travel across the state for a span of two and a half years, with about seven locations already scheduled to open in the late summer or early fall of 2019. It will debut at the Bank Suey community center in Hamtramck.

Howell said the spaces will serve as a means for Muslims and non-Muslims alike to learn about Islamic culture and history through art and conversation with attendees and Muslim American professionals who will give presentations at each event.

“We often see Muslim Americans in a negative light,” she said. “We want to change that narrative about Muslims in Michigan, who are a vital part of the population.”

Jafri, a Detroit-based documentary filmmaker, photographer and co-chair of the Muslim Jewish Forum of Detroit, said the exhibit will explore who Muslim Americans are, the contributions that have made them part of the American fabric and how they have altered it.

A visible manifestation of that contribution are ways they have changed their surroundings and compelled city governments and chain stores to accommodate their needs and cultural norms, Jafri said. He pointed to the nuanced ways that Muslims make themselves known to each other and to non-Muslims, like through Halal meat signs and Arabic signs at libraries or City Hall.

Jafri, who is helping produce the exhibit, said the curated art and discussion topics zero in on a simple, yet fundamental question: Does the American experiment have space to accommodate Muslims’ needs?

“When the landscape changes, there’re an economic upshot,” he said. “When people feel accommodated, they’re more likely to shop at those businesses.”

“Halal Metropolis” is an art exhibit that seeks to highlight the past, present and future of Muslim Americans through traditional and unconventional mediums, Jafri said.

Each event will feature original pieces of photography, sculptures, calligraphy and household artifacts, in addition to multimedia immersive experiences through augmented and virtual reality headsets that will take the viewer into a living room or a storefront, for example.

According to Jafri, a crucial aspect of the exhibit is a tailored community conversation session, where local artist, poets, musicians, activists, community organizers can bring “a sense of nuance and flavor that people might not have about the Muslim community.”

It will also feature a collection of art from other artists throughout the exhibit’s life span, making them “part of the visibility” efforts.

Khan, also an art professor at the University of Michigan-Dearborn, said the art probes at the realities, desired ideals and the fiction surrounding Muslim Americans and what it means to be an immigrant.

As an artist, Khan said he’s interested in the juxtaposition between what Muslim Americans aim to achieve and the perceived threat they invoke from some Americans about Muslims’ desire to implement Sharia law.

He said some of the art challenges the pan-Muslim narrative that all Muslims are united on the issues and touches on intra-community tensions. Other pieces depict Muslim immigrants as heroic figures who once saved a crumbling city and ponders how they might fit into the future of Michigan and the revitalization of Detroit, while others reflect on internalized thoughts and the contemporary condition of Muslims in America.

That could include fictional stories, archival photos of Detroit clubs that adopted Muslim-sounding names to sound exotic, literature, letters and prayer rugs or a photo series exploring the embarrassment Muslim American children feel after bringing ethnic food to lunch at school, Khan added.

“Our narrative is usually [depicted as] black or white or are not told at all, yet are very visible,” he said.

He added that part of the exhibit’s goal is to explore how Muslim art could continue to move into the 21st Century.

“To understand our identity, we have to look back at the traditional aesthetic, but also how we move into the future and allow for a Muslim aesthetic to emerge in a contemporary situation.”

Engaging with southeast Michigan communities on a grassroots level is key to the exhibit’s success, Jafri said. The team is open to collecting artifacts and archival items from the public.

Howell said there will be volunteer and internship opportunities for students and that the community conversation will be taped and published online.

She added that several additional organizations are in talks about providing grants for exhibit and said the Doris Duke Foundation will host the awardees in New York in late June for a media training session that will teach them audience development strategies.