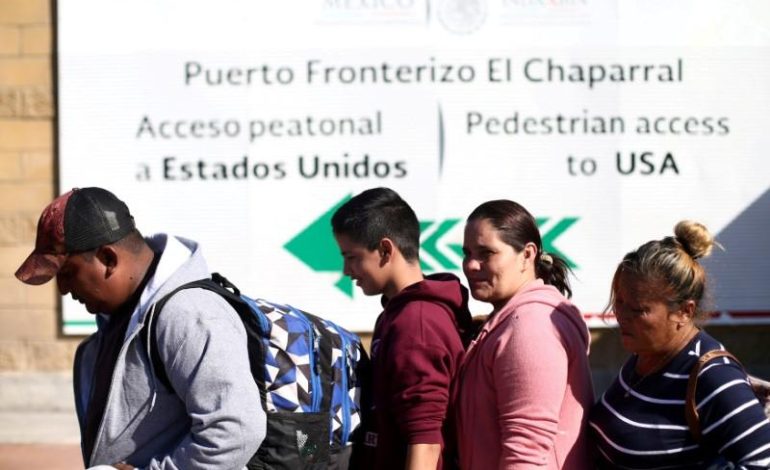 Members of a caravan of migrants from Central America line up to enter the United States border and customs facility, where they are expected to apply for asylum, in Tijuana, Mexico, May 4 - Reuters

The practice known as administrative closure allowed judges to clear low-priority cases off their dockets, effectively letting some immigrants remain indefinitely in the United States despite their lack of legal status.

Under President Obama there had been an effort to administratively close certain cases as a way of allowing judges to focus on higher-priority matters and reduce the immigration court backlog. More than 200,000 cases were closed during the last six years of his presidency.

The closures were routinely used for people without criminal backgrounds who had lived for many years in the United States, often with U.S. citizen children or spouses. In many cases, the immigrants became eligible for work permits.

The administration of President Trump has taken a sharply different tack on immigration, declaring that all those in the country illegally, whether or not they pose a threat to public safety, are subject to deportation.

Since immigration courts fall under the jurisdiction of the Department of Justice, the attorney general can issue opinions in immigration cases to establish legal precedent for judges across the country and the Board of Immigration Appeals.

On Thursday, Sessions issued such an order in a case in which a judge had granted administrative closure for an unaccompanied minor from Guatemala.

Before Sessions’ ruling, the government or an immigrant could ask a judge to close a case. The attorney general ruled that judges “do not have the general authority to suspend indefinitely immigration proceedings by administrative closure.” He said exceptions could be made in some cases, including when an immigrant has certain forms of legal status pending.

Sessions had already quietly been instituting the policy even before this announcement. Reuters reported last June that government prosecutors were moving to put cases that had been previously closed back on the court calendar.

Sessions acknowledged in the order, however, that recalendaring all cases that had been closed “would likely overwhelm the immigration courts.”