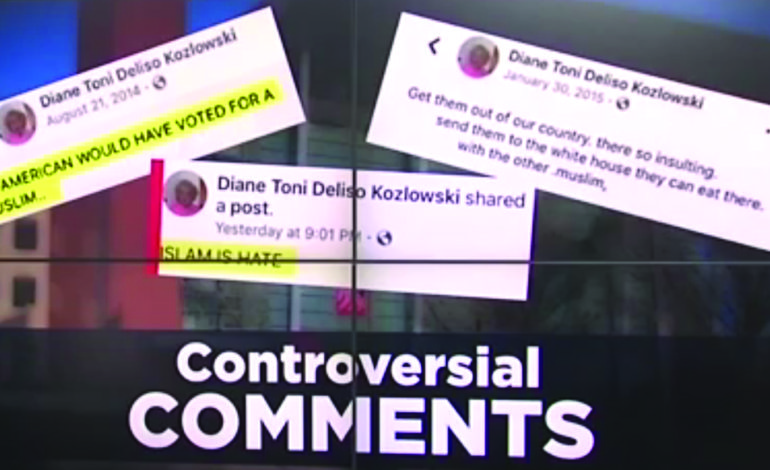 WARREN — A Warren city official has turned in her resignation papers after making anti-Muslim posts on social media.

Diane Toni Deliso Kozlowski, a member of the Elected Officials Compensation Commission, said she wasn’t talking about Muslims, but terrorists, and sparked a nerve with a local Muslim civil liberties organization.

The Council on American Islamic Relations or CAIR, said it wanted Warren Mayor Jim Fouts to remove the city official immediately after she made anti-Muslim comments.

“She expressed immediate embarrassment and remorse,” Mayor Fouts said. “She recognized the error of her ways, she said,  ‘I’m going to resign, I apologize. I did not mean all Muslims, I was referring to terrorists.’”

CAIR was informed about the comments and took action.

“In the city of Warren the Muslim community is growing,” said CAIR Executive Director Dawud Walid. “So this woman and her comments she made about Islam and Muslims, she’s really talking about her neighbors.”

In one post, Kozlowski wrote “Islam is Hate.” In another, she wrote “Get them out of our country, they are so insulting.”

“We want government officials who appoint people into positions in office, is that they do proper vetting and proper screening, including looking at peoples views or comments on Facebook,” Walid said.

Kozlowski handed in her resignation to Mayor Fouts saying in part, “I apologize for offending anyone, including Muslims. My post was referring to terrorists, NOT Muslims.”

The letter went on to say, “I was wrong and as a result I am resigning.”

“I think we resolved the situation and we’ll move forward,” Fouts said.

Fouts said he’ll be working on sensitivity training for all of the boards and commissioners in Warren so something that this doesn’t happen again.