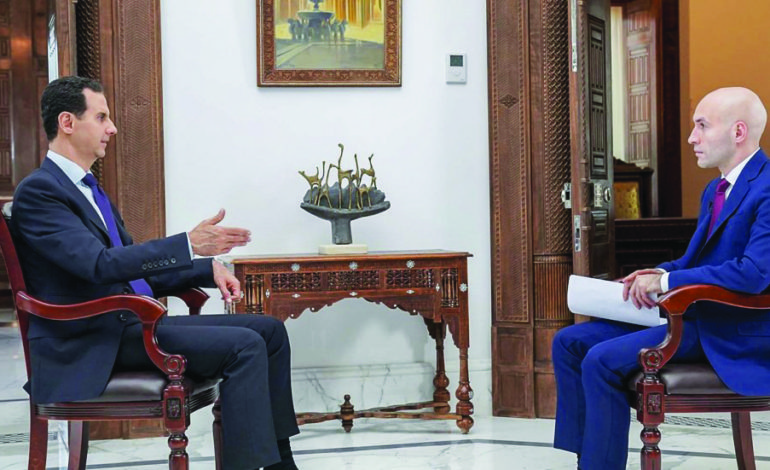 DAMASCUS – Syrian President Bashar al-Assad raised the possibility of conflict with U.S. forces in Syria if they do not withdraw from the country soon.

In an interview with Russia’s RT international broadcaster, Assad said he would negotiate with fighters backed on the ground by Washington, but would reclaim territory they control by force if necessary, whether or not American troops supported them.

Assad also responded sharply to President Trump’s description of him as an animal, saying “what you say is what you are.”

Assad, who is backed by Russia and Iran, appears militarily unassailable in a civil war and a fight against extremist ISIS that has killed hundreds of thousands, displaced millions of people in the country and driven another 5 million abroad as refugees.

Asked to respond to Trump’s calling him an animal. This is not my language…what you say is what you are.

Around 2,000 U.S. special forces troops are believed to be on the ground in Syria, where they have aided a group called the Syrian Democratic Forces (SDF), which is led by the YPG, a Kurdish militia.

The U.S.-backed group holds the largest area of Syrian territory outside government control, but has tried to avoid direct clashes with the government during the multi-sided war.

Assad said the government had “started now opening doors for negotiations” with the SDF.

“This is the first option,” he said in a text of the interview published by Syria’s state news agency. “If not, we’re going to resort to … liberating those areas by force. We don’t have any other options, with the Americans or without the Americans.

“The Americans should leave, somehow they’re going to leave,” he said, adding that Washington should learn the lesson of its war in Iraq, which lasted longer and was much costlier than anticipated.

“They came to Iraq with no legal basis, and look what happened to them,” he said. “They have to learn the lesson. Iraq is no exception, and Syria is no exception. People will not accept foreigners in this region anymore.”

Trump said in April he wanted to withdraw American troops from Syria relatively soon, but also voiced a desire to leave a “strong and lasting footprint.”

U.S. Defense Secretary Jim Mattis said on April 30 the United States and its allies would not want to pull troops out of Syria before diplomats win the peace.

Kino Gabriel, a spokesman for the SDF, said in response to Assad’s comments that a military solution “is not a solution that can lead to any result” and would “lead to more losses and destruction and difficulties for the Syrian people.”

The SDF wants a “democratic system based on diversity, equality, freedom and justice” for all the country’s ethnic and religious groups, he added in a voice message to Reuters.

Trump called Assad an “animal” after a suspected poison gas attack on a rebel-held town near Damascus in April. Medical aid organizations claimed the attack killed dozens of people.

The alleged attack triggered U.S., French and British missile strikes against what they called chemical weapons targets, the first coordinated Western strikes against Syria of the war. But the Western retaliation had no impact on the wider conflict, in which Assad’s forces continued their advances.

In his interview, Assad reiterated the government’s denial of blame for the chemical attack.

“This is not my language,” he said when asked if he had a nickname for Trump similar to the “animal” comment. “So I cannot use similar language. This is his language. It represents him and I think there is a well-known principle, that what you say is what you are.”

Assad also minimized the extent of Iran’s military presence in his country. Israel, which is deeply alarmed by Tehran’s influence in Syria, said it destroyed dozens of Iranian military sites in Syria in May, after Tel Aviv claimed that Iranian forces in Syria fired rockets for the first time at an Israeli targets in the Golan Heights, which is internationally considered Israeli occupied territory.

Assad said Iran’s presence in Syria was limited to officers assisting the army.

“We had tens of Syrian martyrs and wounded soldiers, not a single Iranian” casualty,” he said in an apparent reference to the May 10 attack by Israel

Asked if there was anything Syria could do to stop Israeli air strikes, Assad said the only option was to improve air defenses, “and we are doing that.” Syria’s air defenses were much stronger than before, thanks to Russia, he added.

Assad said the end of the war was getting closer with “every victory”, but accused adversaries in the West and the region of trying to obstruct that and “hindering the political process.”