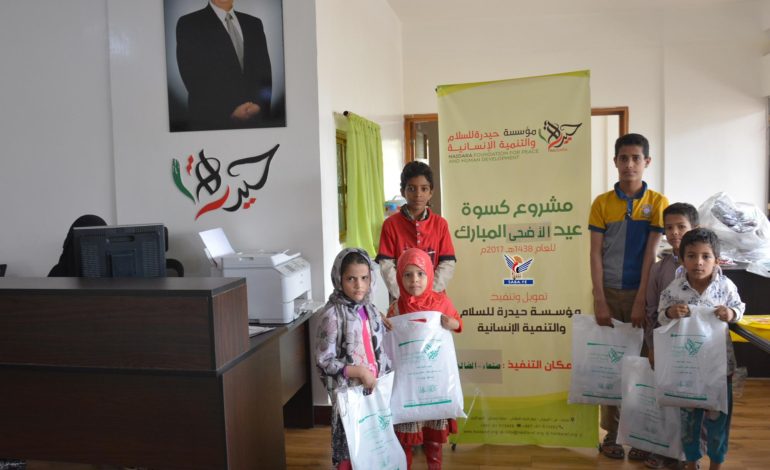 Children in Yemen hold aid send by the Haidaria Foundation

DEARBORN — Saudi Arabia’s ongoing intervention in Yemen has caused a humanitarian crisis that affects millions of people. Local organizations are working to help Yemeni families suffering from starvation and disease.

According to the United Nations, 22 million people in Yemen are in need of humanitarian efforts.

Saeed Haidara, a Dearborn resident, said he founded The Haidara Foundation for Peace and Human Development a year and three months ago, to start a local effort for poor Yemeni families.

The Haidara Foundation is currently operating with the help of Pure Hands for Mankind Inc. Pure Hands is a partner of Yemen Our Home, a relief organization that receives much of its funding from the general public to sponsor emergency relief projects in Yemen.

Walid Fidama, a volunteer with the Haidara Foundation, explained that the foundation’s mission is to help decrease poverty in thousands of families who have been affected by the ongoing crisis in Yemen, which began with the protests in 2011.

“It’s like Syria, Iraq, Lebanon, like anywhere,” Fidama said. “Just put Yemen in the list. They are suffering for food, clothes, all the kinds of things to keep living. They need everything.”

The U.N. estimates 18 million people in Yemen are at risk at starvation due to Saudi blockades on Yemeni ports.

Pure Hands and the Haidara Foundation are hosting an Iftar fundraising event in Dearborn on Tuesday, June 12 to raise money to help support Yemeni families in need.

“We give them clothes and food,” Haidara said. “We educate them to help themselves. We have sewing machines to make clothes for themselves and help others.”

“There are over 600,000 children suffering from cholera,” Fidama said.

The cholera outbreak in Yemen, which began last year, is the largest in recent history. Yemen reached 1 million suspected cases of cholera, confirmed in Dec. 2017 by the International Committee of the Red Cross. According to the World Health Organization, more than 2,200 people have died in Yemen from cholera.

The Haidara Foundation would like to see turnout at the iftar from every community in Dearborn, not just Yemeni Americans.

“The Yemeni children need everybody to help,” Haidara said.

Fidama said that as a Yemeni American, he feels in his heart that it’s important to give back to his people.

“We find people are very generous,” he said. “We make it this month of Ramadan because people’s hearts are open and they want to donate to the children. Please be there and try to help in any way.

Fidama said that there 25 tables have already been purchased for the event, and Haidara Foundation officials are optimistic that they’ll receive more donations that evening.