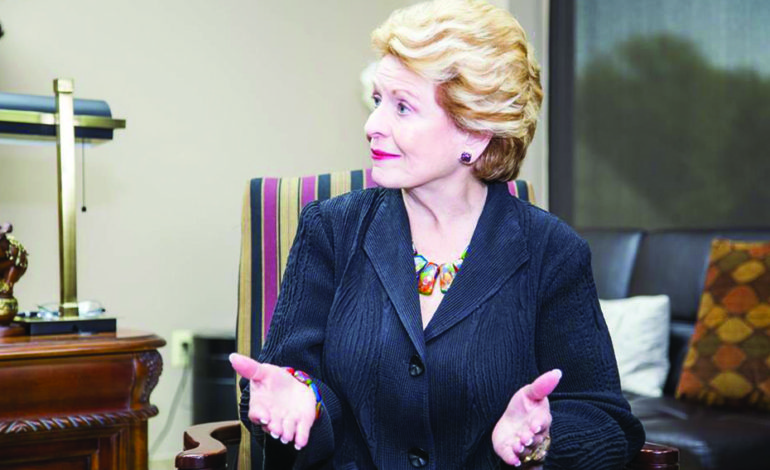 The [travel] ban has nothing to do with safety, makes us less safe around the world and negatively impacts our families in Michigan

DEARBORN — It’s no surprise that people the world over are attracted to the message of change. As one crisis and protest follows after another, it seems like people are forcibly grasping for progress at time when frustration with stagnation has become neck deep.

The United Sates is unmistakably a powerful player on an international stage rife with war and humanitarian crises that have paved the path for prevalent anti-immigration sentiments, culminating in the election of President Trump.

America’s affairs overseas are especially poignant in Michigan, where the third highest number of Arab Americans reside, according to the 2010 U.S Census.

This November, those Arab Americans— and other voters across Michigan— will go to the polls to determine whether to re-elect Democratic U.S.  Senator Debbie Stabenow.

Stabenow, who was first elected in 2000, is currently leading in a number of polls against two Republican challengers.

After making appearances at several businesses in Dearborn on May 25, including at a market and bakery, Stabenow sat down in The AANews offices to discuss what it would take for Americans to see tangible change in both Lansing and Washington and, consequently, around the world. Stabenow said she shares the Arab and Muslim communities’ concerns about how they are being portrayed and the division among Americans the Trump administration has promoted.

“There is not a focus, a purpose about what is being done in a way that is good for our country, good for our people and good for the world,” she said. “Everything is focused on dividing people and having people mistrust each other.”

From her vantage point, the president “is giving permission […] for a vitriol and loud bigotry” to a minority of Americans who engage in hate speech and commit hate crimes.

Although Democrats are a minority in Congress, she said lawmakers like her have continued to fight against the alienation and partisan politics coming out of the White House.

Stabenow added that she’s thankful for a judicial system that has swiftly stepped in to balance the president’s powers, like putting a lid on the travel ban.

With Trump and his lawyer Rudy Giuliani escalating attacks on the Justice Department, Stabenow stressed that it was vital to protect Robert Mueller’s role as a special independent counsel leading the investigation into possible Russian collusion with the Trump campaign in the 2016 elections.

Just hours after President Trump issued an executive order banning the travel of individuals from seven Muslim-majority nations, Stabenow signed on to a Republican-sponsored senate bill that called for its reversal. A move on the bill was denied by Senator Tom Cotton (R-Ark.).

As a final verdict from a Republican-leaning Supreme Court on the travel ban’s constitutionality draws near, Stabenow said Americans are left with the pragmatic option to head to the polls this November and elect lawmakers who will challenge the decision, if the justices side with the president.

I’m very sorry about the words coming from this administration. They are wrong; they are hateful; they do not represent the majority of people and we need to be loud together. Stabenow with Publisher Siblani at The AANews office

Leaked intelligence documents obtained in 2014 by The Intercept showed that Dearborn, with a high concentration of Arab Americans and population of nearly 100,000, had the second highest number of residents on the “Terrorist Screening Database”, the U.S. government’s watchlist of “known or suspected terrorists” that is used by multiple agencies, including the FBI.

Stabenow was sympathetic and said it’s often too easy for an individual to get on the list, but very hard for them to get off as there is little to no due process in place. She said that mostly happens when travelers share the same name with a known “terrorist.”

She added that under the Obama administration, she had spoken directly to the former secretary of Homeland Security regarding the issue on several occasions, but that talks were unsuccessful.

Because the Trump administration is not sympathetic to those burdened by being unjustly placed on the list, attempts to be removed— for now, at least— will have to be on a case by case basis, she said.

“It’s a matter of profiling people from a racial or religious stand point,” Stabenow said of the watch list, adding that due process will take legislation and would most likely not happen administratively. Power of the pro-Israeli lobby

In the wake of month-long demonstrations on the Gaza-Israeli border that resulted in more than 110 deaths and thousands of injuries by Israeli military forces, more Americans and lawmakers have taken to the streets and social media, voicing opposition against Israeli aggression.

But last March, 55 senators, including Gary Peters (D-MI), co-signed a bill that pushed back against a United Nations Human Rights Council resolution that urged countries to divest from or break contracts with Israel.

The “Israel Anti-Boycott Act”, or Senate Bill 720, makes it illegal for Americans to participate in or support the boycott, divestment or sanctioning of Israel.

Stabenow said she didn’t support the bill because she felt it infringes on free speech and that it was “not written in a way” that would make her sign on.

She criticized the Trump administration’s approach and decision to move the U.S. embassy from Tel Aviv to Jerusalem, saying the president should have taken advice against doing so.

“I think it’s very regretful what they did,” she said. “And it really breaks my heart when I see what’s happening in terms of the violence.”

However, Stabenow has co-singed resolutions that favor continued U.S. support of Israeli settlement expansion, that maintain defense systems and are against Israel returning to the armistice lines that existed on June 4, 1967.

When asked why the U.S. has double standards when dealing with Israel and its attacks on Syria, compared to its relationship with other countries like Russia, Iran and Saudi Arabia, which are engaged in a proxy war in Syria, Stabenow dodged the question, saying the issue was “very, very complicated.” Following Trump’s decision to abandon U.S. participation in the Iran Nuclear Deal, many are concerned that tensions will lead to war between Iran and U.S. allies, like Israel and Saudi Arabia.

Stabenow said she doesn’t know if the U.S. will engage in a war with Iran, but she worries because she’d supported the nuclear agreement because it made Americans safer from a nuclear threat.

“We had a huge coalition of allies that came together, and it was the right thing to do,” she said. “Now, our allies don’t know if they can trust our word.”

She added that she doesn’t think the White House carries out “well thought out” decisions or that the president is well-prepared or has the experience to understand world’s complexities.

“I just don’t feel we have a steady hand [in the White House],” she said.

However, she said the U.S. should get tougher on Iran, which she said has “chosen” to sponsor terrorist activities in the region.

I don’t believe our county has taken the right position on Yemen. There is a huge humanitarian crisis going on there and the United States is not doing enough.

The Yemeni American community has not only suffered the travel ban’s severe impacts because of family separation, but the U.S.’s pledge to aid other nations in their war in Yemen has resulted in wide-spread famine and disease, creating what the United Nations calls the world’s worst humanitarian crisis.

Last June, the senate narrowly voted for a $110 million package to arm Saudi Arabia with precision-guided missiles, used to continue its military campaign in Yemen. The sales deal was nearly blocked by 47 senators who voted against it, but the remaining 53 senators made way for the State Department’s approval of $670 million in munitions to the kingdom.

Stabenow said she’s highly critical of Saudi Arabia’s actions in Yemen, which is why she voted against the arms deal.

“I don’t believe our county has taken the right position on this,” she said. “There is a huge humanitarian crisis going on there and I don’t think the United States is doing enough on this.”

She added that she was concerned that Trump’s decision to make Saudia Arabia the first foreign country he visited as president— rather than one that shares our nation’s democratic values— sent the wrong message.

“That was a mistake,” she said. With a Republican-majority Congress gridlocking domestic and international policy changes, Stabenow stressed the importance of Michiganders voting from large pool of strong Democratic candidates in the November elections.

She said if enough Democrats were elected to the Senate so they could to chair committees, like the homeland security, judiciary or foreign relations committees, the conversation would shift to include accountability on policies like the travel ban.

She also cautioned against underestimating the power of Trump’s tweets and the ability for his rhetoric to shift conversations and create distractions.

Although Stabenow said she thinks the national climate post-Trump’s election favors Democratic values, she acknowledged that, “it’s going to be a lot of hard work.

“I’d love to say a blue wave [is coming], but I’m not willing to say that,” she said. “I think people need to work hard and it all depends on who decides that this is not the right way to do things and who comes out to vote.”

Major women players in the state’s pool of candidates also helps drive a sense of change that could be brought with the Democratic party, she added.

Stabenow is coasting on a comfortable lead in polls, so she said the best campaign efforts she could pursue is to keep working hard and getting things done.

“People in Michigan expect you to go out and earn your vote,” she said.

Stabenow vowed to fight for Michigan families in Washington and said she was honored to represent a diverse community that makes the state as vibrant and competitive as it is.

“I’m very sorry about the words coming from this administration,” she said. “They are wrong; they are hateful; they do not represent the majority of people and we need to be loud together. And part of being loud is voting in the election, because we can make change, we can make it better — but we have to participate to do that.”