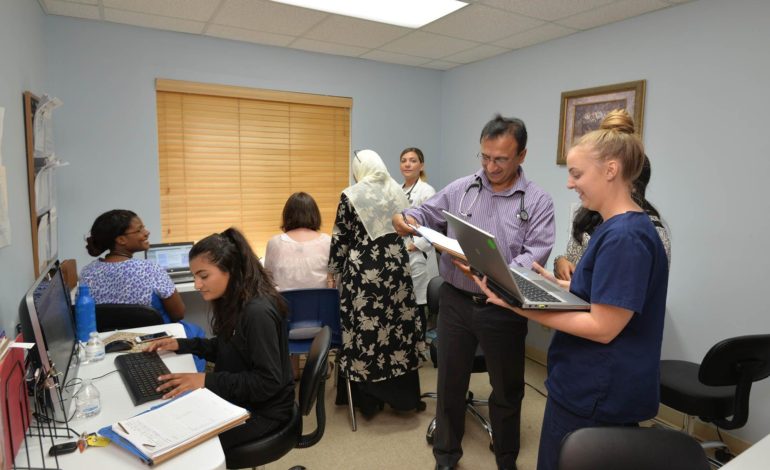 Doctors and nurses review charts on a busy Sunday afternoon inside the physicians room at the volunteer-run Muslim American Social Services Clinic in Jacksonville, Florida. Photo by Dede Smith for The Florida Times-Union

David Gagner was having seizures.

But he did not have nor can afford health insurance, so he sought care at a Baptist Health emergency room. There he was told he had another option in the future, the volunteer-run Muslim American Social Services, or MASS, clinic that provides free health care to uninsured, low-income adults of all faiths in Duval County, Florida.

Gagner, 36, now has a medical home. For the past four months or so, he has been a regular patient at the clinic and his seizures are controlled with medication. He lives on Jacksonville’s Westside and the clinic is on the Southside, but he said the care he has received is worth the drive.

He is such a fan that he has recommended the clinic to his friends who are in similar financial binds.

The clinic began in 2010 in a trailer on the Islamic Center of Northeast Florida campus on St. Johns Bluff Road. Medical services were offered every other Sunday. After a fundraising campaign, the clinic relocated in 2014 and expanded into a building adjacent to the center and is now open four days a week.

The motivation behind the clinic’s initial founding was both humanitarian and patriotic.

“We thought with such terrific medical talent among the Muslim physicians and a desire to serve America, our adopted country that we love and that has given us so much, it was only appropriate that we use that talent to serve our community,” said founding board chairman Mobeen H. Rathore, a physician who is also professor and director of the University of Florida Center for HIV/AIDS, Research, Education & Service in Jacksonville. “As immigrants we are committed to serve this great country of ours.”

Since 2011 patients have had about 10,100 visits. They receive “continuity of care” over time with the same health care professionals and the burden on emergency rooms is decreased, said board chairman Rehan Khawaja.

“If we don’t take care of the patients who were going to the ER, they’ll end up in the ER again,” he said.

Although the clinic is an outreach of the Islamic Center — and many of the volunteers are Muslim — care is open to any Duval resident who is uninsured and living at or below 200 percent of the poverty level. Volunteer spots are open to everyone as well, Khawaja said.

“I just couldn’t say no,” he said. “Such a good cause, helping the community. I owe it to my community.”

On a recent Sunday the clinic waiting room was packed with a diverse crowd of people. Volunteer heath care professionals were seeing patients, taking X-rays, providing physical therapy and other services, while other volunteers checked patients in and handled paperwork via electronic medical records.

Peggy Pannell, 45, of Dinsmore was there to see a neurologist about her migraine headaches. She has been a clinic patient for about 1½ years and appreciates not only the free care but the Sunday hours.

“I didn’t have insurance because of some of the conditions I have,” she said. “It [the clinic] has been a blessing to me.”

Another patient, 65-year-old Carmen Quintero, moved to Jacksonville to be near her children. She had no health insurance but needed follow-up treatment for prior thyroid cancer surgery, she said through a clinic volunteer who served as an interpreter.

She is grateful for the “attention she gets from the doctor,” the interpreter said. “Everything is just really good here.”

Also grateful is Sue Nussbaum, executive director of We Care Jacksonville, a volunteer coalition of health care professionals, clerical personnel and local church groups that provide primary and specialty care to the uninsured, the homeless and the medically underserved people. The MASS clinic is part of the coalition.

“MASS clinic and We Care Jacksonville have been partners from their beginnings,” she said. “I am so impressed by the incredible giving spirit of their dedicated staff and volunteers who consistently help our uninsured and low-income community with health care services. The clinic serves individuals from every race, ethnicity and religion become healthier.”

The goodwill generated by the clinic and its volunteers could go a long way in the wider world, said volunteer physician Aftab Ahmad, who is the clinic’s medical director.

He said he hoped the Muslim American-founded clinic’s “positive message” can help negate negative messages that many people associate with Muslims. Everyone else, he said, should view Muslims as “just people like us, just … going through the same things.”

– Beth Reese Cravey is a writer for The Florida Times-Union and Jacksonville.com.