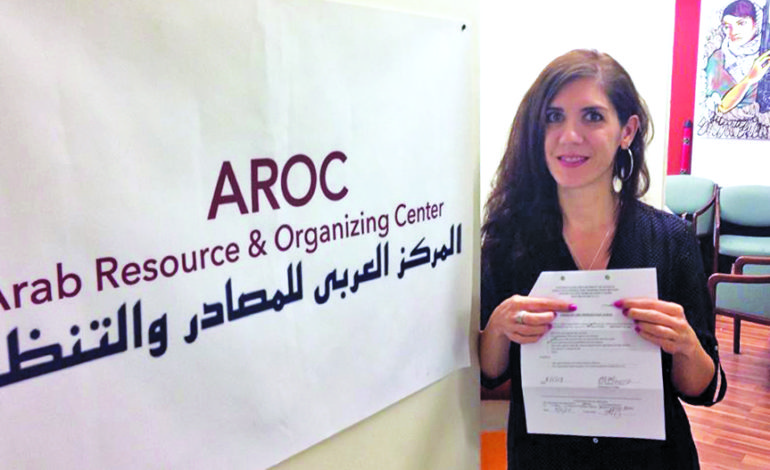 At the May 22 district school board meeting and to the dismay of some in the Jewish community, that hold was lifted and the contract was granted.

Board members voted 6-1 to allow AROC to “provide workshops in classrooms related to leadership development and cultural empowerment.” Under terms of the three-year contract, AROC instructors will be present once a week at five San Francisco high schools: Balboa, Galileo, Mission, Raoul Wallenberg and S.F. International. Though the program is open to all students, AROC will offer special support to Arab American and Arabic-speaking students.

The objection stems mainly from the pro-Israel elements in San Francisco’s Jewish community which accuse AROC of being a pro-Palestinian group and of working against the interest of Israel. Also, they allege that members of AROC support the Boycott, Divestment, Sanctions (BDS) movement.

The Jewish News of North California reported in June 2015 that Lara Kiswani, AROC’s executive director and former member of Students for Justice in Palestine, urged UC graduate students to pass an Israel divestment measure at a Nov. 2014 panel discussion.

AROC also helped lead a Block the Boat campaign in 2014, which twice sought to prevent the offloading at Oakland Harbor of a cargo ship partially owned by an Israeli company, succeeding the second time. Referring to that campaign, the AROC website proclaimed that “business with the racist, exclusionary, Zionist state of Israel, which works alongside local and federal law enforcement to repress our communities, will not go unchallenged.”

According to its website, AROC is a S.F.-based nonprofit that claims to do work on behalf of the local Arab American community, including immigration services, language access and what it calls “anti-repression” and “anti-war” activism.

Other Jewish members spoke in support of ARCO and for granting it the contract, including a member of Jewish Voice for Peace.

“[AROC] is the organization in San Francisco that can provide Arab culturally relevant programming for Arab youth,” said a woman who identified herself as Ellen and who claimed she represented “hundreds of thousands of Jews” who are critical of Israel and Zionism. “This organization can provide the mentorship that can help Arab youth in our school district. I can assure you that the Arab community looks to AROC for a multitude of services, including mentoring their youth. So I encourage you to renew AROC’s MOU (memorandum of understanding) so they can continue to provide culturally relevant education of students.”

According to the contract, the AROC curriculum “will be under direct supervision of certified SFUSD staff.” The document further stipulates that AROC may not disseminate to students any information that “reflects adversely upon persons because of their race, color, ancestry, national origin, ethnic group identification, age or religion.”

The Jewish Community Relations Council was critical of AROC and its school district contract from the beginning. Spokesman Jeremy Russell expressed disappointment that the board granted its approval for the program. Earlier, on July 14, 2015, a letter was sent from the Jewish council to members of the board of education and to the superintendent of the San Francisco Unified School District urging them to hold the contract and not to grant it to AROC.

“Any group that espouses hatred really should not be a partner for the school district,” Russell wrote in his letter.

In return, AROC’s president slammed the Jewish council’s attempt to prevent the group from getting the contract describing it as more than an intimidation tactics.

“We see this recent development consistent with the way that JCRC operates on a regular basis where they ignore the impact their actions have on children,” Kiswani wrote in an email to the San Francisco Examiner back in 2015. “They are literally willing to take educational opportunities away from children in order to feed their need to defend the state of Israel.”

The AROC’s website shows a solid commitment for Palestinian rights. All posters, pictures and slogans illustrate its members’ support for the struggle of the Palestinian people. They describe themselves as “a grassroots organization working empower and organize our community towards justice and self-determination for all.”

AROC was previously known as the San Francisco branch of the American Arab Anti-Discrimination Committee (ADC) .