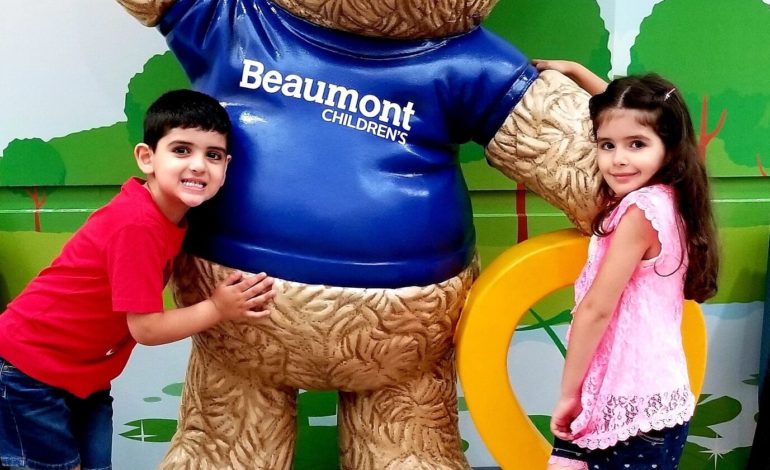 Lara Nasr Eddin, 6, right, earned $35 by selling her handmade bracelets and donated the funds to help kids who are sick. She and her brother Fares, 5, pose with Beau the Bear statue at Beaumont Hospital, Dearborn

Lara is a kindergartner at Bedford Elementary School in Dearborn Heights.

“I read at a second-grade level,” she said with a proud smile. “I’m already doing multiplications.”

This summer, Lara will be moving to Texas with her family, but before school ended, she wanted to do something for her friends to say goodbye.

“She decided to make bracelets and necklaces for them,” said Aboukhair, who bought the supplies for her daughter.

With her mom’s help, Lara went to work making as many as she could.

Lara’s grandmother told her about a story she remembered seeing in which a young girl made bracelets to raise money for children in need. Lara loved the idea, and a few weeks later she told her mom she wanted to sell them to help children in the hospital.

Lara sold the bracelets she made to family members for $1 each. Accompanied by her grandmother, she visited neighbors asking if they would like to buy a bracelet. Lara also sold bracelets to her teachers. Before she knew it, she had raised $35.

Lara joined her mom and 5-year-old brother, Fares, for a doctor’s appointment at Beaumont Hospital, Dearborn.

“I told Lara to bring the money to see if they can accept it for children who may need it,” Aboukhair said.

They asked at the guest relations desk if there was someone to accept the donation.

“They called me to the front desk and said someone wanted to speak with me,” said Sandra Sommer, senior major gift officer, Beaumont Health Foundation.

When Sommer arrived, Lara handed her a hand-decorated envelope. She’d used a crayon to write questions on the envelope, asking kids in the hospital about how they felt.

“It was so sweet what she did, and a privilege to be able to help her make that contribution,” Sommer said.

The funds Lara raised will go toward helping Beaumont Children’s Hospital, which sees about 150,000 children and teens each year.

Lara takes inspiration from one of her favorite movies, “Despicable Me 3.”

“I want to sell the toys I can’t bring with me to Texas and donate the money I make to help more kids,” she said. “The Minions did it; so I can, too!”